Wayback Machine List of municipalities in Ontario Enlarge
For the hamlet in Scotland, see Arnprior, Stirling.
Town in Ontario, Canada

Arnprior is a town in Renfrew County, in the eastern portion of Southern Ontario, Canada. It is located at the confluence of the Madawaska River and the Ottawa River in the Ottawa Valley. Arnprior has experienced significant growth in populations with the widening of the 417 Provincial Highway to four lanes. The Town experienced an increase in population by 8.4% from 2011 to 2016, at which time its population was 8,795.[2] The town is a namesake of Arnprior, Scotland, and is known for lumber, hydro power generation, aerospace, farming and its proximity to the National Capital Region.

The land occupied by what's now called Arnprior is part of the traditional territory of the Algonquin nation of indigenous North Americans. The first European explorers, led by Samuel de Champlain, first visited the area in May 1613.

In 1823, a 1,200-acre (490 ha) surveyed block was ceded to Archibald McNab and given the eponymous name, McNab Township. McNab had approval from the Family Compact to treat the settlers on his land in the feudal manner practised in Scotland. In 1831 the town was named by the Buchanan Brothers after McNab's ancestral home of Arnprior, Scotland.

Tired of the harsh treatment, the settlers revolted and, after a government investigation, McNab was forced to vacate the area in 1841.[3] Arnprior, Braeside and McNab township grew as separate communities and boomed when they became integrated into eastern Ontario's massive timber industry.

One of the most successful businessmen of the upper Ottawa was Daniel McLachlin, who built a massive sawmill at the confluence of the Madawaska and Ottawa Rivers, and expanded the community of Arnprior.[4] The lumber industry maintained a significant position until the closing of the Gillies Mill.[5] One of the most enduring structures of the day was a grist mill built by the Buchanans on the west bank of the Madawaska River.

By 1869, Arnprior was an Incorporated Village with a population of 2,000 in the Township of McNab. It was on the Brockville and Ottawa Railway at the junction of the Madawaska and Ottawa Rivers. The average price of land $20 to $40.[6]

The grey stone building served many purposes after it stopped being used as a grist mill, finally being operated as a restaurant and a gas station, first by the Beattie and then the Baird families, ending in 1974. The facility has been bought by Ontario Hydro prior to the restructuring on the bridge and the creation of a new weir to control the river. The building was consumed by fire in 1976. The forests of the period are represented in the Grove which is an excellent example of indigenous forest, grown after a fire in the 18th century. With individual specimens reaching 175 ft (53 m), these are the tallest white pines in Ontario.[7] 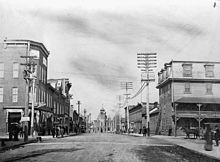 On 8 June 1944 a Castle-class corvette, HMS Rising Castle, was recommissioned as HMCS Arnprior until 1946.[8]

Arnprior became a recognized name in the numismatic trade. This has a special link to a local employer. In 1955 Playtex ordered some silver dollars for their employees. These coins are later found to show only two and one-half water lines instead of four to the right of the canoe. This variety becomes known as the Arnprior dollar.

The history of Arnprior is preserved and documented at the Arnprior and District Museum[9] (located in the former post office building and library) and the Arnprior and McNab/Braeside Archives,[10] located next door in the basement of the public library. The sandstone building is the defining element in local architecture

Arnprior has drawn new business to Eastern Ontario. Proximity to the city of Ottawa, easy access to highway 417, access to a local airport, full services and infrastructure have contributed to making Arnprior the location for multinational corporations including Arnprior Aerospace Inc,

The Arnprior and Area Chamber of Commerce has over 100 members and is a support and advocate for many of the corporations and small to medium-sized businesses within the Arnprior Area.[12]

Some of the major corporations and top employers:

The lumber trade continued in the form of the Gillies sawmill in nearby McNab Township until its closing in 1993. Pictures of the early days of the lumbering industry are seen at the online Charles Macnamara Retrospective.[13]

Kenwood Mills, initially a blanket manufacturer which developed woven fabrics for the pulp and paper industry, was a significant employer in Arnprior and was bought in 1918 by Huyck Corporation. It was a strong contributor to Arnprior remaining viable during the Depression.[14] The building has now been renovated into the Kenwood Corporate Centre which houses a number of offices, warehouse spaces, conference rooms, a café and a gym.[15]

Sullivan and Sons and Smith Construction companies were significant economic drivers and employers based in Arnprior. In 2014 they celebrated their 100th year in business and continue to be a major employer in the town and a large community supporter.[16]

Arnprior Airport was built for the British Commonwealth Air Training Plan and hosted No. 3 Flying Instructor School for the. Post war, the facility was used by the Canadian military and a training base known as the Civil Defence College,[17] later known as the Emergency Measures Training Centre.[18] The airport, operated by Arnprior Airport Commission, still operates with two runways for land-based aircraft and Arnprior Water Aerodrome with a dock and fuelling station for floatplanes. The airport property also houses many private hangars and a skydiving company.[19]

After the Second World War, companies such as Playtex, Pfizer and Boeing came to Arnprior. Boeing Aircraft Company began manufacturing in 1955 and maintained an operation until selling to Arnprior Aerospace in October 2005.

The Madawaska River at McEwen's Creek was dammed to create a hydro generating station[20] with approval given in 1972. The dam, which became operational in 1976, has created a new body of water known as Lake Madawaska. This was the fifth and last dam to be built on the Madawaska River and they have a total generating capacity of 614 MW.

Agriculture has been a fixture surrounding Arnprior since the arrival of McNab's Scottish immigrants. The farming tradition has been celebrated by the Arnprior Fair since 1854.[22]

Arnprior has been served since 1945 by the Arnprior and District Memorial Hospital.[23]

Arnprior is within the Federal riding of Renfrew—Nipissing—Pembroke, represented by Cheryl Gallant of the Conservative Party of Canada since the year 2000.

Provincially, it is in the equivalent electoral district of Renfrew—Nipissing—Pembroke, represented by John Yakabuski of the Progressive Conservative Party of Ontario, who was first elected in 2003.

Hockey is the only municipally sponsored sport in Arnprior. The Arnprior Packers represent the town in the Central Canada Hockey League Tier 2, which is the town's highest level of competition in this sport. The games are played at the Nick Smith Centre[27] which features two year round ice rinks, a 25-metre indoor swimming pool, a fitness centre and a community hall with kitchen. The two ice rinks each have ice surface measuring 200 ft × 85 ft (61 m × 26 m). Arena 'A' seating capacity of over 2,000; standing and seated 4,000 capacity.

Curling was established as an open-air sport in the Arnprior area, around 1865. The Arnprior Curling Club now occupies a 4-sheet building on Galvin Street (est. 1970).[28] The highest level of competition hosted by the club are the Valley League and the Low Cup.

The only print media dedicated to Arnprior is the Arnprior Chronicle-Guide.[29] The EMC Newspaper was bought by Metroland Media Group in 2011.[30] There is no independent, non-syndicated media coverage of Arnprior available in print form. Oldies 107.7 radio broadcasts from Arnprior to Renfrew, Ontario and is the only Arnprior local radio station.

Elgin Street in Arnprior in 2014

Arnprior is located on the Trans-Canada Highway system, where Highway 417 to the east becomes the two-lane Highway 17 to the west. The town is served by the Arnprior Airport, elevation 108 m (355 ft), and the nearby Arnprior Water Aerodrome, elevation 100 m (330 ft), for general aviation; although there is no longer commercial aviation at the airport.

Arnprior has a long history with railways. The Canada Central Railway reached Arnprior on December 6, 1864.[31] On Easter Sunday, March 23, 1880, a change to standard gauge brought the Canadian Pacific Railway (CPR) main line. Later the Canadian National Railway (CNR) came and, through the majority of the 20th century, Arnprior was served by both major Canadian railways. The CNR tracks were pulled up and the right-of-way is used as a walking trail. In June 2012, CPR removed its tracks throughout the county.

The town is located at the confluence of the Ottawa and Madawaska rivers. It is cut off from the lower Ottawa River and the Saint Lawrence Seaway by the Chats rapids, and now the Chats Falls Generating Station. Following exploration, travel and transportation was by canoe: the Ottawa River by Arnprior was a main route for the fur trade.

With Arnprior's central location between the National Capital Region and the Ottawa Valley it offers visitors and residents alike access to the entertainment and events of the city as well as access to nationally recognized outdoor activities all within a short travel time.[32]

Arnprior has several historical landmarks together with the many required modern conveniences, including shopping, hospital, recreation, restaurants, water sport facilities, and beaches. Arnprior has been recognized by the prestigious Communities in Bloom organization as the top community in its class for its heritage conservation, landscaping, beautification, tidiness, environmental efforts and community involvement.[33]

Some main attractions for the town are:

Galilee Centre, which is the former McLachlin Estate along the Ottawa River, is a holistic spiritual life centre that hosts programs, groups and individuals. On site is a Royal Oak planted in 1860 by His Royal Highness, Edward Prince of Wales.[45]