The Arno is a river in the Tuscany region of Italy. It is the most important river of central Italy after the Tiber. 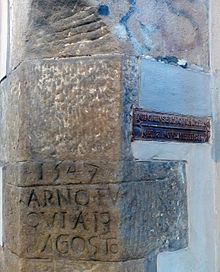 The river originates on Monte Falterona in the Casentino area of the Apennines, and initially takes a southward curve. The river turns to the west near Arezzo passing through Florence, Empoli and Pisa, flowing into the Tyrrhenian Sea at Marina di Pisa.

With a length of 241 kilometres (150 mi), it is the largest river in the region. It has many tributaries: Sieve at 60 kilometres (37 mi) long, Bisenzio at 49 kilometres (30 mi), and the Era, Elsa, Pesa, and Pescia. The drainage basin amounts to more than 8,200 square kilometres (3,200 sq mi) and drains the waters of the following subbasins:

It crosses Florence, where it passes below the Ponte Vecchio and the Santa Trinita bridge (built by Bartolomeo Ammannati but inspired by Michelangelo). The river flooded this city regularly in historical times, most recently in 1966, with 4,500 cubic metres per second (160,000 cu ft/s) after rainfall of 437.2 millimetres (17.21 in) in Badia Agnano and 190 millimetres (7.5 in) in Florence, in only 24 hours.

Before Pisa, the Arno is crossed by the Imperial Canal at La Botte. This water channel passes under the Arno through a tunnel, and serves to drain the former area of the Lago di Bientina, which was once the largest lake in Tuscany before its reclamation.

The flow rate of the Arno is irregular. It is sometimes described as having a torrentlike behaviour, because it can easily go from almost dry to near flood in a few days. At the point where the Arno leaves the Apennines, flow measurements can vary between 0.56 and 3,540 cubic metres per second (20 and 125,014 cu ft/s). New dams built upstream of Florence have greatly alleviated the problem in recent years.

The flood on November 4, 1966 collapsed the embankment in Florence, killing at least 40 people and damaging or destroying millions of works of art and rare books. New conservation techniques were inspired by the disaster, but even decades later hundreds of works still await restoration.[1]