Armenian Canadians (Western Armenian: գանատահայեր, Eastern Armenian: կանադահայեր, kanadahayer; French: Arméno-Canadiens) are citizens and permanent residents of Canada who have total or partial Armenian ancestry. According to the 2016 Canadian Census they number almost 64,000, while independent estimates claim around 80,000 Canadians of Armenian origin, with the highest estimates reaching 100,000. Though significantly smaller than the Armenian American community, the formation of both underwent similar stages beginning in the late 19th century and gradually expanding in the latter 20th century and beyond. Most Armenian Canadians are descendants of Armenian Genocide survivors from the Middle East (Syria, Lebanon, Egypt), with less than 7% of all Canadian Armenians having been born in Armenia. Today most Armenian Canadians live in Greater Montreal and Greater Toronto, where they have established churches, schools and community centers. 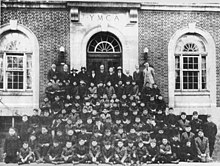 A group of the Georgetown Boys.

The first Armenians migrated to Canada in the 1880s. The first recorded Armenian to settle in Canada was a man named Garabed Nergarian, who came to Port Hope, Ontario in 1887.[2][3] Some 37 Armenians settled in Canada in 1892 and 100 in 1895. Most early Armenian migrants to Canada were men who were seeking employment. After the Hamidian massacres of mid-1890s Armenian families from the Ottoman Empire began settling in Canada. Before the Armenian Genocide of 1915 some 1,800 Armenians already lived in Canada. They were overwhelmingly from the Armenian provinces of the Ottoman Empire and usually lived in industrial urban areas. The influx of Armenians to Canada was limited in the post-World War I era because Armenians were classified as Asians.[3] Nevertheless, some 1,500 genocide survivors—mostly women and children—came to Canada as refugees.[4] In 1923-24 some 100 Armenians orphans aged 8-12, later known as The Georgetown Boys, were brought to Canada from Corfu, Greece by the Armenian Canadian Relief Fund to Georgetown, Ontario.[2] Dubbed "The Noble Experiment", it was Canada's first humanitarian act on an international scale.[3] The Georgetown Farmhouse (now the Cedarvale Community Centre) was designated historic and protected municipal site in 2010.[5]

Immigration laws were loosened in the post-World War II era. Through the efforts of the Canadian Armenian Congress thousands of Armenians were allowed in. In the 1960s some 5,000 Armenians settled in Canada and by the 1970s Canada already boasted an Armenian population of 30,000. Most Armenians came from the Middle East (Syria, Lebanon, Egypt, Turkey) and Greece. Migrants from Soviet Armenia were also increasingly moving to Canada.[7] The Armenian Soviet Encyclopedia entry on Armenians (1980) by Suren Eremian estimated some 50,000 Armenians in Canada.[8] The same number was given by Hrag Vartanian, writing for the AGBU Magazine in 2000.[3]

According to the 2016 census, almost 90% of Canadian Armenians reside in Canada's two largest provinces: Ontario and Quebec. Smaller number of Armenians live in British Columbia and Alberta. Armenian communities in other provinces and territories number less than 1,000. According to the 2016 census, the number of Canadian Armenians by provinces, territories and census divisions was as follows:[25][26]

The highest concentration of Armenian Canadians of any major settlement is in Laval (part of Greater Montreal), where Armenians are the 9th largest ethnicity and comprise around 2.5% of the total population.[28]

A minority of Armenian Canadians are Protestant and Catholic. The Armenian Catholic Church has two churches: Notre Dame de Nareg in Saint-Laurent (Montreal, 1983) and St. Gregory the Illuminator in Toronto (1993).[4] The two churches operate under the Armenian Catholic Eparchy of Our Lady of Nareg in the United States of America and Canada.[4] Up to 10,000 Catholic Armenians reside in Canada, with the largest community in Montreal.[42][43]

A number of Armenian organizations have branches in Canada, including the non-partisan and secular Armenian General Benevolent Union (AGBU), which has two chapters in Montreal (founded in 1957) and Toronto.[45] Other Armenian organizations with established presence in Canada are the Armenian Relief Society with ten chapters,[46] the Hamazkayin Armenian Educational and Cultural Society (two chapters, 5 units),[47] and Homenetmen (six chapters and units).[48] Armenia Fund also has two branches (in Montreal and Toronto).[49]

The Zoryan Institute of Canada, a center for contemporary Armenian research and documentation, was established in 1984.[50]

The three traditional parties of the Armenian diaspora are present in Canada. The nationalist Armenian Revolutionary Federation (ARF, Dashnaktsutiun) is by far the largest and most influential with nine chapters.[4] Its active circles include the young wing (Armenian Youth Federation, AYF)[51] and the Armenian National Committee of Canada (ANCC), established in 1965 with the mission to advance the "concerns of the Armenian Canadian community on a broad range of issues", including fostering "public awareness in support of a free, united and independent Armenia."[52] The current spokesperson of the ARF Bureau, Hagop Der-Khatchatourian, is from Montreal. The conservative Ramgavar and social democratic Hunchak parties have branches in Montreal and Toronto.[53][4]

The Armenian Genocide memorial in Montreal, by artist Francine Larrivée

In 1996 and 2002 Canadian Prime Minister Jean Chrétien released statements on the "Armenian tragedy of 1915"[54] and the "calamity suffered by the Armenian community."[55]

In 2002 the Senate of Canada passed a resolution (39-1) sponsored by Shirley Maheu that called upon the Government of Canada to "recognize the genocide of the Armenians and to condemn any attempt to deny or distort a historical truth as being anything less than genocide, a crime against humanity, and to designate April 24th of every year hereafter throughout Canada as a day of remembrance of the 1.5 million Armenians who fell victim to the first genocide of the twentieth century."[56][57]

However, it was not until April 21, 2004 when Canada officially recognized the Armenian Genocide. On that day the House of Commons adopted a "strongly worded"[58] resolution which stated: "That this House acknowledges the Armenian genocide of 1915 and condemns this act as a crime against humanity." It passed with 153 votes in favor, 68 against.[59][60] The motion was opposed by the Liberal cabinet of Prime Minister Paul Martin, who was absent during the vote,[58] however, most Liberal backbenchers voted in favor of the Bloc Québécois motion, while cabinet members rejected it.[58]

Since 2006, Prime Minister Stephen Harper released annual statements explicitly referring to the Armenian Genocide.[61] The tradition has been continued by his successor, Justin Trudeau.[62]

On April 24, 2015, on the 100th anniversary of the Armenian Genocide, the House of Commons of Canada unanimously passed a resolution that designated the month of April as Genocide Remembrance, Condemnation and Prevention Month and April 24 as Armenian Genocide Memorial Day. The parliament also reaffirmed its support for the Armenian genocide recognition resolution adopted on April 21, 2004.[63][64]

According to the Armenian National Institute there are six Armenian Genocide memorials in Canada.[65]

Armenian Canadians have risen to prominence in many fields.

Ottoman-born Yousuf Karsh, who was based in Ottawa, is considered the leading portrait photographer of the 20th century.[74][75][76][77]

Egypt-born film director Atom Egoyan has been described as "the most accomplished Canadian director of his generation."[78] His wife Arsinée Khanjian is a Beirut-born actress.

Andrea Martin, born to Armenian parents in the US, is a celebrity comedian and actress.[80]

Peter Oundjian was the music director of the Toronto Symphony Orchestra in 2004–2018.[81]

Egypt-born Raffi Armenian was the director of the Conservatoire de musique du Québec à Montréal between 2008 and 2011.[82]

Syrian-born Hrag Vartanian is the co-founder and editor of Hyperallergic, an online arts magazine.[85] Rapper bbno$ is half Armenian.

Ottoman-born medical scientist John Basmajian was Head of the Department of Anatomy at Queen's University.[86] His work in electromyography "resulted in significant progress in rehabilitative science."[87]

Istanbul-born Agop Jack Hacikyan and Beirut-born Razmik Panossian are known for their work in Armenian studies.

Damascus-born anthropologist Sima Aprahamian was a teacher at Montreal's Concordia University and is a member of the institution's "Simone de Beauvoir Center for Women's rights".

Ottoman-born Aris Alexanian was one of Canada's leading rug importers between 1920s and 1960s.[88]

Anita Sarkeesian, a controversial feminist media critic, was at the center of the Gamergate controversy.[92][93]