Armed forces of the Netherlands

The Armed forces of the Netherlands consist of the Army, Navy, and Air Force.

The service branches consist of:

In addition, within the Kingdom of the Netherlands, there are small local conscript forces on the islands of Aruba (Arumil) and Curaçao (Antmil). These operate under the auspices of the Royal Netherlands Navy and Marines.

The military ranks of the Dutch armed forces have similarities with British and U.S. military ranks. The highest-ranking officer in the Dutch military is the Chief of Defence (Netherlands), who is a four-star officer (NATO OF-9).

Foundation in law and purpose

This means that the role and responsibility of the Dutch military in international stability and peacekeeping is constitutionally determined.

In addition, a second major change in military affairs was made in 2003. Before then, all citizens of the Netherlands were tasked with the defense of the kingdom. In keeping with the move to a professional military, this article was dropped. 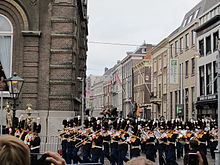 The Netherlands' military is currently a fully professional military. Conscription in the Netherlands was suspended in 1996 with the exception of Aruba and Curaçao.[5] All military branches and specialties are open to female recruits. In October 2018 the Dutch Ministry of Defence announced that the submarine service will also accept female recruits for positions as officer, NCO and sailor.

The Dutch Ministry of Defence employs over 61,000 personnel, including both civilian and military personnel.

The Dutch military is part of the NATO militaries and therefore conforms to the structure of a NATO military. It also uses conforming rank structures. All Dutch military personnel, officers and enlisted personnel, are required to take an oath of allegiance. This oath is recorded in the law on General Military Personnel Regulations (Algemeen Militair Ambtenarenregelement) in Article 126a.

Unlike many military organizations, Dutch military members are allowed to form and join unions.

There are four of these unions:

All unions represent both current and retired military personnel and/or civilian personnel.

Since the 1990s, the Dutch military has been involved in four major military campaigns:

As part of Operation Enduring Freedom as a response to those attacks, the Netherlands deployed aircraft as part of the European Participating Air Force (EPAF) in support of ground operations in Afghanistan as well as Dutch naval frigates to police the waters of the Middle East/Indian Ocean. The Netherlands deployed further troops and helicopters to Afghanistan in 2006 as part of a new security operation in the south of the country.[6] Dutch ground and air forces totalled almost 2,000 personnel during 2006, taking part in combat operations alongside British and Canadian forces as part of NATO's ISAF force in the south.

The Netherlands announced in December 2007 that it would begin withdrawing its troops from Afghanistan, which were mainly in Uruzgan Province, in July 2010. "I do not have assurances that other countries will be ready to replace Netherlands troops, but I am certain that Dutch troops will leave in 2010," Foreign Minister Maxime Verhagen said. "I indicated that in writing ... to the NATO secretary general, who has confirmed it."[7] In January 2009, Prime Minister Jan Peter Balkenende reiterated that the 1,600 Dutch troops in Afghanistan would end their mission in 2010, saying "We will stop in Uruzgan in 2010." He ruled out the possibility of the Netherlands keeping its troops in Afghanistan past 2010 with any force comparable to its former deployment.[8]

In December 2009, reacting to three requests received from the side of the U.S. by Vice President Biden, the special American representative to Afghanistan Holbrooke and Secretary of State Clinton and a request by Secretary General of NATO Rasmussen as well, the Dutch government announced that the final decision on the continuation of the mission in Uruzgan would be on its agenda in March 2010. Two ministers from the Labour Party (PvdA), Koenders (Development Aid) and Bos (Finance and Vice PM) in the meantime pleaded termination, which was also the opinion of the majority of the Dutch parliament.[9][10][11][12]

On 10 December 2009, the Dutch daily newspaper De Telegraaf reported that the government was exploring areas elsewhere in Afghanistan to set up a new mission. The northern province of Kunduz was mentioned, where at the moment German and Belgian troops were deployed. On 9 December, allegedly PM Balkenende (CDA), the vice-PM's Bos (PvdA) and Rouvoet (ChristenUnie) and the three involved ministers Verhagen (CDA, Foreign Affairs), Van Middelkoop (ChristenUnie, Defense) and Koenders (PvdA, (Development Aid) secretly discussed the future Dutch engagement in Afghanistan, together with Commander of the Forces general Van Uhm.[13][14]

In early February 2010, the disagreement between the PvdA on the one hand and CDA and ChristenUnie on the other about a request from NATO, by improper channels, for a renewed Dutch commitment in Afghanistan, came to a head. CDA and ChristenUnie wanted the freedom to consider this request—in spite of the decisions by the Minister of Defence and the votes in Parliament—whereas PvdA and a majority of the parties in the Dutch parliament stood by the earlier decision and refused any consideration of further Dutch involvement in Afghanistan. Thus, on 20 February, the PvdA had no choice but to resign their ministers from the Cabinet, leading to a collapse of the Dutch government. As a result, the NATO request could not be considered and Dutch troops withdrew later in 2010 according to the schedule agreed in 2007.[15]

On 1 August 2010 the Dutch military formally declared its withdrawal from its four-year mission in Afghanistan; most soldiers are expected to be back in the Netherlands by September, excepting those working on the reset, redistribution and repatriation of materiel and supplies. The AH-64 Apache and F-16 squadron will remain longer in Afghanistan to support the withdrawal process and transports.[16] The Dutch contingent has been replaced by soldiers from the U.S., Australia, Slovakia, and Singapore.