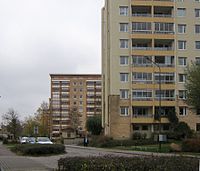 Along the E22, Arlöv has these high-rise buildings with 9 floors.

Kronetorpsmöllan is an old preserved windmill in Arlöv. Here it is shown with a large Transformers banner, since it was the site of the very first Nordic Transformers convention in late 2007, arranged by The Nordic TransFans Association.

Arlöv (Swedish pronunciation: [ˈɑ̌ːɭœv])[1] is the seat of Burlöv Municipality, Skåne County, Sweden. It is statistically not defined as a locality of its own, but forms part of the contiguous city of Malmö, 5 km northeast of downtown Malmö. Out of Malmö's 344,000 inhabitants, 11,000 live in Arlöv. However, in the 1950s, a public vote took place, deciding once and for all that Burlöv Municipality would never be a part of Malmö.

Arlöv is known for its sugar industry, Sockerbolaget AB (owned by the Danish company Danisco). The town was also the home of the AB Svenska Järnvägsverkstäderna (Swedish Railway Works) or ASJ, who in the 1970s also built several automobiles for SAAB, notably the Saab Sonett II and III. Arlöv Church dates from 1900 and is Neo-Gothic in style; it was built to accommodate the growing congregation.

Arlöv is mentioned in the song "Hanna från Arlöv" ("Hanna from Arlöv") by the 1970s Swedish band Nationalteatern. Arlöv is also the birthplace of Swedish rock artist Kal P. Dal.

The former office building of Danisco Sugar was bought in 2008 by the Church of Scientology who opened their new church, a so-called "Ideal org" there in 2009.