The Argentina national under-20 football team is the representative of Argentina in FIFA sponsored tournaments that pertain to that age level.

Argentina is the most successful nation in the FIFA World Youth Championship, winning the competition a record six times. The team has participated in 16 of the 22 World Championship events, since the 1979 edition, which they won. Argentina has also won five South American Youth Championships.

The team that won its first championship in 1979.

Argentina did not participate of the first youth championship held in Tunisia. The first appearance of a national team in an under-20 competition was two years later at the 1979 FIFA World Youth Championship in Tokyo. The team, coached by César Luis Menotti with the help of Ernesto Duchini (who had previously chosen the players and working with them),[1] won the tournament showing a fine style of playing consisting in high possession of the ball, short and long passes, dribblings, a solid defense and a powerful offensive line that scored a total of 20 goals along the tournament. Diego Maradona and Ramón Díaz were the team's leaders and most notable players of the squad. The tournament was also the first official championship played by Maradona in a national team. After his frustration of 1978, Maradona made the most of his performances during the tournament, being the playmaker of the team due to his passing moves, dribblings to rivals, his accuracy to shot free kicks and the six goals he scored.

Before every match, Diego played with the ball, putting it on his neck or his shoulders while the Japanese people couldn't stop applauding him. When I would see this, I would say to myself: "Wow, and the show hasn't even started yet".

Argentina debuted in Group B thrashing Indonesia 5–0 in the first match, beating Yugoslavia 1–0 in the second and defeating Poland in the third match, 4–1. The youth squad finished first in the group with ten goals scored and only one conceded. En route to the final, Argentina hammered Algeria 5–0, then defeated arch-rival Uruguay 2–0. In the final against the Soviet Union on 7 September, the team won 3–1, becoming the World Youth Champions for the first time. Ramón Díaz won the Golden Shoe as the topscorer, with eight goals, while Maradona was awarded the Golden Ball as best player of the tournament.[2]

Apart from Maradona and Díaz, other notable players of the team were Juan Simón, Hugo Alves, Gabriel Calderón, Juan Barbas and Osvaldo Escudero. That team is still regarded as one of the best Argentine national squads ever.[3]

Argentina attended the next tournament, hosted by Australia in 1981. The squad was defeated by the local host (2–1), then achieving a draw with England (1–1) and beating Cameroon 2–1. Argentina did not qualify to the next stage, however, earning only three points after three matches played.

The national team made a much better performance at the 1983 championship hosted by Mexico, reaching the final with Brazil. On the first round, Argentina thrashed China 5–0, then widely defeated Austria (3–0) and beat Czechoslovakia in the last game, 2–0. The team finished first in the group with zero goals conceded. In the quarter-finals, Argentina defeated Netherlands 2–1 (after Marco van Basten had opened the scored for the Oranje) and Poland 1–0 in the semi-finals. On 19 June 1983, Argentina played the final against Brazil, falling 1–0 at the Estadio Azteca.[4] The team was coached by Carlos Pachamé, designated by the Senior team coach, Carlos Bilardo, to work with youth players.

Argentina did not qualify to play the 1985 and 1987 championships (played in the Soviet Union and Chile respectively), but the team participated in the tournament held in Saudi Arabia as one of the three qualified in the South American championship. Argentina was defeated by Spain in the first match. The team recovered winning the second game to Norway 2–0, but although it lost the last match to Iraq, Argentina qualified for the second round. In the knockout stage, the team was beaten 1–0 by Brazil.

For the 1991 championship held in Portugal, Argentina was coached by Reinaldo Merlo, who was designated by then-senior coach Alfio Basile as it had been in the precedent era.

Argentina made its worst campaign in youth tournaments, finishing last in their group with only one point earned from three matches. The team lost to South Korea 1–0 in the first match, then were defeated by hosts Portugal 3–0 in a match where three Argentine players (Claudio París, Mauricio Pellegrino and Juan Esnáider) were sent off for their rough play which culminated in a brawl on the pitch between both teams. As a result, FIFA punished the Argentina Football Association (AFA) with a two-year suspension, as well as a one-year suspension for Esnáider and a two-year suspension for Norberto Recassens (one of the representatives of the AFA), both of whom insulted the referees in their dressing room at the end of the match.[6]

Some of the players that took part of that team were goalkeeper Leonardo Díaz, defenders Diego Cocca, Mauricio Pochettino and Pellegrino; midfielders París, Walter Paz Hugo Morales and Christian Bassedas; and forwards Marcelo Delgado and Esnáider.[7]

Because it was banned, Argentina did not participate in the 1993 World Cup in Australia. The Argentina Football Association (AFA) had opted to name a new coach entirely independent from the senior team coach as had been until then. Selected was José Pékerman, who, despite not having much previous experience, convinced the AFA to hire him.

The good results were immediate: Argentina won the first World Cup contested with Pékerman as coach, held in 1995 in Qatar. In the first stage, Argentina defeated the Netherlands 1–0, then lost to Portugal 1–0 followed by a 4–2 win over Honduras, securing a second-place finish and progression to the quarter-finals, where they thrashed Cameroon by 4–0. In semi-finals, Argentina beat Spain 3–0 then defeated Brazil 2–0 in the final, exacting revenge from the 1983 tournament where the Brazilians won.

Argentina won its third title at the 1997 championship, hosted by Malaysia. The team defeated Hungary 3–0 and Canada 2–1, but lost to Australia 4–3. Argentina passed to the round of 16 where they defeated England 2–1. In quarter-finals, Argentina eliminated Brazil after winning 2–0, then beat the Republic of Ireland 1–0 in the semi-finals. In the final match, played on 5 July 1997, the squad defeated Uruguay 2–1 to win its third championship. The team also received the FIFA Fair Play Award in recognition to the good behaviour showed on the field.

Argentina showed the talent of notable players such as Leonardo Franco, Fabián Cubero, Leandro Cufré, Walter Samuel, Diego Placente, Esteban Cambiasso, Pablo Aimar, Juan Román Riquelme and Bernardo Romeo, many of them with already many matched played in the Primera División when the tournament began.[9]

The performance during the 1999 World Championship in Nigeria was not so good. Argentina finished 3rd of 4 in the group, winning over Kazakhstan 1-0 at the debut but with a game lost to Ghana (1-0) and a 0-0 draw with Croatia. On the round of 16, Argentina was largely defeated at the hands Mexico by 4-1 and eliminated from the tournament.

In 2001 Argentina hosted its first Youth Championship. The team won its fourth title, the third championship in seven years. Argentina debuted in the José Amalfitani Stadium (the venue where the team played all its games in Buenos Aires) defeating Finland 1–0. The next game Argentina thrashed Egypt 7–1 (with three goals by Javier Saviola), and closed its participation in Group A by smashing Jamaica by 5–1. In the knockout round, Argentina successively eliminated China (2–1), France (3–1) and Paraguay (5–0), winning the tournament with a convincing 3–0 over Ghana at the final, played on 8 July at Vélez Sársfield. Argentina won its fourth youth title unbeaten, scoring 27 goals in 7 matches, conceding 4. River Plate's forward Javier Saviola was awarded with the Golden Shoe (as the topscorer with 11) and Golden Ball as the best player of the tournament. Likewise, Argentina was awarded the FIFA Fair Play Award for the second-straight time. Apart from the multi-awarded Saviola, the national squad had a powerful team with most of its players being experienced playing at the domestic first division, notably Nicolás Burdisso, Leonardo Ponzio, Julio Arca, Leandro Romagnoli, Mauro Rosales, Andrés D'Alessandro and Maxi Rodríguez.[10][11]

The 2001 championship was the last title won with Pékerman as coach, closing a brilliant era that brought back the prestige to Argentine football.

After the departure of Pékerman, former goalkeeper Hugo Tocalli was designed to replace him. With Tocalli as coach, Argentina made its debut at 2003 championship defeating Spain 2–1. The team also beat Uzbekistan (by the same score) and Mali (3–1). Argentina finished first and unbeaten the first stage. In the round of 16, the national squad beat Egypt 2–1, then defeated United States 2-1 but Argentina lost to Brazil 1-0 at the semifinals. The team was also defeated by Colombia in the 3rd place match so Argentina finished in the 4th position of the general table. Forward Fernando Cavenaghi was the topscorer of the tournament with 4 goals.

In 2004, Pékerman was appointed to coach the Argentina senior team ahead of 2006 FIFA World Cup qualifying.[12] One year later, Tocalli left the youth team to join Pékerman's coaching staff on the senior squad, so Francisco Ferraro was designated coach,[13] won its fifth title at the World championship hosted by the Netherlands. Argentina lost to the United States in the first match, won against Egypt (2–1) and Germany (1–0) to qualify for the next stage. From the round of 16 to the semi-finals, Argentina successively eliminated Colombia (2–1), Spain (3–1) and Brazil (2–1) reaching the finals for the sixth time. On 2 July 2005, Argentina defeated Nigeria 2–1 in the final to win its fifth youth championship. Both goals were scored by Lionel Messi from the penalty spot.[14] Messi was the leader of the team and his magical performances resulted in him winning both the top scorer and best player's awards.[15]

In the 2005 team's squad, Lionel Messi was the star player and had already been a La Liga champion with FC Barcelona in the 2004-05 season. Other notable players for Argentina in that year were goalkeeper Oscar Ustari; defenders Ezequiel Garay and Julio Barroso, midfielders Pablo Zabaleta, Fernando Gago and Lucas Biglia; and forwards Sergio Agüero and Neri Cardozo.

Two years later, the team won its second-straight title at the 2007 FIFA U-20 World Cup, hosted by Canada. After a 0–0 draw in the debut with Czech Republic, Argentina smashed Panama 6–0 and defeated North Korea[16] 1–0 to secure qualification to the second round. In the knockout stage, Argentina eliminated Poland (3–1), followed by Mexico (1–0) and Chile (3–0) en route to the final. In the final, played on 22 July, Argentina won its sixth title after defeating the Czech Republic 3–1. Sergio Agüero, the top scorer of the championship with six goals, was also awarded the Gold Ball as best player. Other notable players on the squad were goalkeeper Sergio Romero; midfielders Éver Banega, Maxi Moralez and Ángel Di María; and forwards Mauro Zárate and Pablo Piatti.

The following players will take part in the 2019 FIFA U-20 World Cup. 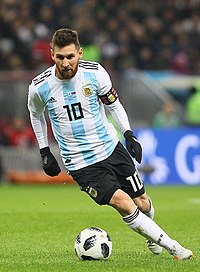