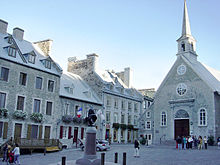 Area codes 418, 581, and 367 are telephone area codes in the North American Numbering Plan for the eastern portion of the Canadian province of Quebec. While 418 is the originally assigned code for the numbering plan area, all three area codes are today assigned in an overlay plan for this territory. Cities in the numbering plan area include Quebec City, Saguenay, Rivière-du-Loup and Rimouski. Also serves are the Gaspé Peninsula, Côte-Nord, southeastern Mauricie, and the tiny hamlet of Estcourt Station, in the U.S. state of Maine.

Area code 418 was one of the original area codes created by AT&T in 1947. Since then, the numbering plan area includes mostly the eastern half of the province of Quebec. Ontario and Quebec were the only provinces to receive multiple area codes at the outset.

Nominally, northwestern Quebec—one of the few areas of North America without telephone service—was reassigned from area code 514 to 418 in 1957. From the 1950s to the 1970s, 418 was also the area code for the eastern Northwest Territories. However, in the 1970s, as direct distance dialling was introduced to the far northern and western portions of 418, these points were reassigned to area code 819.

Despite Quebec City's rapid growth, by the turn of the millennium, 418 was the last of Quebec and Ontario's original four area codes that had never been split. By 2006, however, 418 was on the brink of exhaustion due to Canada's system of number allocation. Every competitive local exchange carrier is allocated blocks of 10,000 numbers–corresponding to a single three-digit prefix–for every rate centre where it plans to offer service, no matter how small. Once a number is assigned to a carrier and rate centre, it cannot be moved elsewhere, even when a rate centre has more than enough numbers to serve it. This resulted in thousands of wasted numbers, and the proliferation of cell phones and pagers (especially in the larger cities) only exacerbated the problem. Additionally, a number of "megacities" created in 2002 are split between multiple rate centres that have never been amalgamated. For example, Saguenay is split between four rate centres.

In 2007, the Canadian Radio-television and Telecommunications Commission assigned area code 581 as an overlay for the 418 territory. Implementation of 581 began on June 21, 2008 with the start of a permissive dialing period during which it was possible to make local calls with both seven and ten digits. Ten-digit dialing became mandatory in eastern Quebec on September 6, 2008.[1][2]

By 2016, 418 and 581 was again on the brink of exhaustion, due to further proliferation of cell phones and pagers. In 2017, the CRTC assigned area code 367 as a second overlay for eastern Quebec; the new area code entered service in 2018.[3] This had the effect of assigning 23.4 million numbers to 1.8 million people. However, overlays have become the preferred method of relief in Canada, as they are an easy workaround for the number allocation problem; no area codes have been split in the country since 1999. The major incumbent local exchange carriers in the area are Bell Canada, Bell Aliant, Telus (formerly Quebec-Telephone) and Vidéotron.

Places in the service area