Wayback Machine Archivist Archival science
For other uses, see Archive (disambiguation).
For the Wikipedia coordination point on archived pages, see Wikipedia:Historical archive.
For details on how to archive a talk page, see Help:Archiving a talk page.
"Digital archive" redirects here. It is not to be confused with Digital library. For other uses, see Digital archiving. 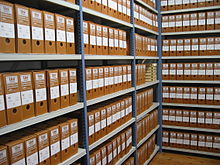 Shelved record boxes of an archive.

An archive is an accumulation of historical records – in any media – or the physical facility in which they are located.[1] Archives contain primary source documents that have accumulated over the course of an individual or organization's lifetime, and are kept to show the function of that person or organization. Professional archivists and historians generally understand archives to be records that have been naturally and necessarily generated as a product of regular legal, commercial, administrative, or social activities. They have been metaphorically defined as "the secretions of an organism",[2] and are distinguished from documents that have been consciously written or created to communicate a particular message to posterity.

In general, archives consist of records that have been selected for permanent or long-term preservation on grounds of their enduring cultural, historical, or evidentiary value. Archival records are normally unpublished and almost always unique, unlike books or magazines of which many identical copies may exist. This means that archives are quite distinct from libraries with regard to their functions and organization, although archival collections can often be found within library buildings.[3]

The computing use of the term "archive" should not be confused with the record-keeping meaning of the term.

The English word archive /ˈɑːrkaɪv/ is derived from the French archives (plural), and in turn from Latin archīum or archīvum,[6] the romanized form of the Greek ἀρχεῖον (arkheion). The Greek term originally referred to the home or dwelling of the Archon, a ruler or chief magistrate, in which important official state documents were filed and interpreted; from there its meaning broadened to encompass such concepts as "town hall" and "public records".[7] The root of the Greek word is ἀρχή (arkhē), meaning among other things "magistracy, office, government",[8] and derived from the verb ἄρχω (arkhō), meaning "to begin, rule, govern" (also the root of English words such as "anarchy" and "monarchy").[9]

The word archive is first attested in English in the early 17th century, and the word archivist in the mid 18th century, although in these periods both terms are usually found used only in reference to foreign institutions and personnel. Not until the late 19th century did they begin to be used at all widely in domestic contexts.[5][10]

The adjective formed from archive is archival.

The practice of keeping official documents is very old. Archaeologists have discovered archives of hundreds (and sometime thousands) of clay tablets going back to the third and second millennia BC in sites like Ebla, Mari, Amarna, Hattusas, Ugarit, and Pylos. These discoveries have been fundamental to know ancient alphabets, languages, literature, and politics.

Archives were well developed by the ancient Chinese, the ancient Greeks, and ancient Romans (who called them Tabularia). However, they have been lost, since documents written on materials like papyrus and paper deteriorated at a faster pace, unlike their stone tablet counterparts. Archives of churches, kingdoms, and cities from the Middle Ages survive and have often kept their official status uninterruptedly until now. They are the basic tool for historical research on these ages.[11]

Modern archival thinking has many roots from the French Revolution. The French National Archives, who possess perhaps the largest archival collection in the world, with records going as far back as 625 A.D., were created in 1790 during the Revolution from various government, religious, and private archives seized by the revolutionaries.[14] 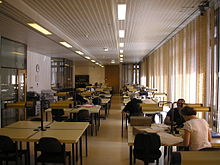 Reading room of the Österreichisches Staatsarchiv (Austrian State Archive), in the Erdberg district of Vienna (2006)

Historians, genealogists, lawyers, demographers, filmmakers, and others conduct research at archives.[15] The research process at each archive is unique, and depends upon the institution that houses the archive. While there are many kinds of archives, the most recent census of archivists in the United States identifies five major types: academic, business (for profit), government, non-profit, and other.[16] There are also four main areas of inquiry involved with archives: material technologies, organizing principles, geographic locations, and tangled embodiments of humans and non-humans. These areas help to further categorize what kind of archive is being created. 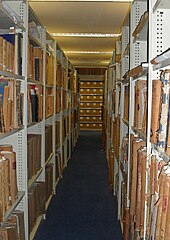 Archives in colleges, universities, and other educational facilities are typically housed within a library, and duties may be carried out by an archivist.[17][page needed] Academic archives exist to preserve institutional history and serve the academic community.[18] An academic archive may contain materials such as the institution's administrative records, personal and professional papers of former professors and presidents, memorabilia related to school organizations and activities, and items the academic library wishes to remain in a closed-stack setting, such as rare books or thesis copies. Access to the collections in these archives is usually by prior appointment only; some have posted hours for making inquiries. Users of academic archives can be undergraduates, graduate students, faculty and staff, scholarly researchers, and the general public. Many academic archives work closely with alumni relations departments or other campus institutions to help raise funds for their library or school.[19] Qualifications for employment may vary. Entry-level positions usually require an undergraduate diploma, but typically archivists hold graduate degrees in history or library science (preferably certified by a body such as the American Library Association).[20] Subject-area specialization becomes more common in higher ranking positions.[21]

Archives located in for-profit institutions are usually those owned by a private business. Examples of prominent business archives in the United States include Coca-Cola (which also owns the separate museum World of Coca-Cola), Procter and Gamble, Motorola Heritage Services and Archives, and Levi Strauss & Co. These corporate archives maintain historic documents and items related to the history and administration of their companies.[22] Business archives serve the purpose of helping their corporations maintain control over their brand by retaining memories of the company's past. Especially in business archives, records management is separate from the historic aspect of archives. Workers in these types of archives may have any combination of training and degrees, from either a history or library background. These archives are typically not open to the public and only used by workers of the owner company, though some allow approved visitors by appointment.[23] Business archives are concerned with maintaining the integrity of their company, and are therefore selective of how their materials may be used.[24] 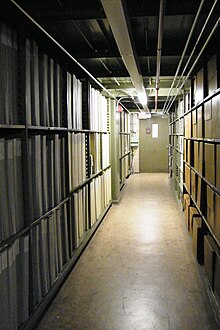 In the United States, National Archives and Records Administration (NARA) maintains central archival facilities in the District of Columbia and College Park, Maryland, with regional facilities distributed throughout the United States. Some city or local governments may have repositories, but their organization and accessibility varies widely.[26] Similar to the library profession, certification requirements and education also varies widely, from state to state.[27] Professional associations themselves encourage the need to professionalize.[28] NARA offers the Certificate of Federal Records Management Training Program for professional development.[29] The majority of state and local archives staff hold a bachelor's degree[30]—increasingly repositories list advanced degrees (e.g. MA, MLS/MLIS, PhD) and certifications as a position requirement or preference.[20]

In the UK, the National Archives (formerly known as the Public Record Office) is the government archive for England and Wales. The English Heritage Archive is the public archive of English Heritage. The National Archives of Scotland, located in Edinburgh, serve that country while the Public Record Office of Northern Ireland in Belfast is the government archive for Northern Ireland.

A network of county record offices and other local authority-run archives exists throughout England, Wales, and Scotland and holds many important collections, including local government, landed estates, church, and business records. Many archives have contributed catalogues to the national "Access to Archives" programme and online searching across collections is possible.

In India, the National Archives (NAI) are located in New Delhi.

In Taiwan, the National Archives Administration are located in Taipei.[32]

Most intergovernmental organisations keep their own historical archives. However, a number of European organisations, including the European Commission, choose to deposit their archives with the European University Institute in Florence.[33]

A prominent Church Archives is the Vatican Secret Archive.[34] Archdioceses, dioceses, and parishes also have archives in the Roman Catholic and Anglican Churches. Very important are monastery archives, because of their antiquity, like the ones of Monte Cassino, Saint Gall, and Fulda. The records in these archives include manuscripts, papal records, local Church records, photographs, oral histories, audiovisual materials, and architectural drawings.

Web archiving is the process of collecting portions of the World Wide Web and ensuring the collection is preserved in an archive, such as an archive site, for future researchers, historians, and the public. Due to the massive size of the Web, web archivists typically employ web crawlers for automated collection.

Similarly, software code and documentation can be archived on the web, as with the example of CPAN.

Some archives defy categorization. There are tribal archives within the Native American nations in North America, and there are archives that exist within the papers of private individuals. Many museums keep archives in order to prove the provenance of their pieces. Any institution or persons wishing to keep their significant papers in an organized fashion that employs the most basic principles of archival science may have an archive. In the 2004 census of archivists taken in the United States, 2.7% of archivists were employed in institutions that defied categorization. This was a separate figure from the 1.3% that identified themselves as self-employed.[42]

Another type of archive is the Public Secrets project.[43] This is an interactive testimonial, in which women incarcerated in the California State Prison System describe what happened to them. The archive's mission is to gather stories from women who want to express themselves, and want their stories heard. This collection includes transcripts and an audio recording of the women telling their stories.

The archives of an individual may include letters, papers, photographs, computer files, scrapbooks, financial records, or diaries created or collected by the individual – regardless of media or format. The archives of an organization (such as a corporation or government) tend to contain other types of records, such as administrative files, business records, memos, official correspondence, and meeting minutes.

The Arctic World Archive is a commercially-run facility for data preservation located in the Svalbard archipelago, Norway, which contains data of historical and cultural interest from several countries, as well as all of American multinational company GitHub's open source code. The data is kept on reels of specially developed film in a steel vault buried deep beneath the permafrost, with the data storage medium expected to last for 500 to 1000 years.[44]

The International Council on Archives (ICA) has developed a number of standards on archival description including the General International Standard Archival Description ISAD(G).[45] ISAD(G) is meant to be used in conjunction with national standards or as a basis for nations to build their own standards.[46] In the United States, ISAD(G) is implemented through Describing Archives: A Content Standard, popularly known as "DACS".[47] In Canada, ISAD(G) is implemented through the Council of Archives[48] as the Rules for Archival Description, also known as "RAD".[49]

The cultural property stored in archives is threatened by natural disasters, wars or other emergencies in many countries. International partners for archives are UNESCO and Blue Shield International in accordance with the Hague Convention for the Protection of Cultural Property from 1954 and its 2nd Protocol from 1999. From a national and international perspective, there are many collaborations between archives and local Blue Shield organizations to ensure the sustainable existence of cultural property storage facilities. In addition to working with the United Nations peacekeeping in the event of war, the protection of the archives requires the creation of "no strike lists", the linking of civil and military structures and the training of local personnel.[52][53][54][55]