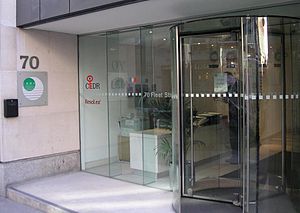 The London Court of International Arbitration

An arbitral tribunal (or arbitration tribunal) is a panel of one or more adjudicators which is convened and sits to resolve a dispute by way of arbitration. The tribunal may consist of a sole arbitrator, or there may be two or more arbitrators, which might include either a chairman or an umpire. Members selected to serve on the tribunal are typically professionals with expertise in law and mediation, although some scholars have suggested that the ideal composition of an arbitral tribunal should include at least one economist, particularly in cases that involve questions of asset or damages valuation.[1]

The parties to a dispute are usually free to determine the number and composition of the arbitral tribunal. In some legal systems, an arbitration clause which provides for two arbitrators (or any other even number) is understood to imply that the appointed arbitrators will select an additional arbitrator as a chairman of the tribunal, to avoid deadlock arising. Different legal systems differ as to how many arbitrators should constitute the tribunal if there is no agreement.[2]

Permanent tribunals tend to have their own rules and procedures, and tend to be much more formal. They also tend to be more expensive, and, for procedural reasons, slower.[3]

The parties are generally free to determine their own procedure for appointing the arbitrator or arbitrators, including the procedure for the selection of an umpire or chairman.[4] If the parties decline to specify the mode for selecting the arbitrators, then the relevant legal system will usually provide a default selection process. Characteristically, appointments will usually be made on the following basis:

Most arbitration clauses will provide a nominated person or body to select a sole arbitrator if the parties are unable to agree (for example, the President of the relevant jurisdiction's Bar Association, or a recognised professional arbitration organisation such as the LCIA, or a relevant professional organisation). In default of such a provision, where the parties are unable to agree, an application for an appointment is usually made to the court.[5]

Normally a well drafted arbitration clause will also make provision for where a party to the dispute seeks to cause delay by refusing to make or agree an appointment. Often this will allow the "non-defaulting" party to appoint a sole arbitrator and for the arbitration to proceed on that basis.[6]

Where the tribunal consists of an odd number of arbitrators, one of them may be designated as the umpire or chairman. The selection of title carries some significance. When an arbitrator is "chairman", then they will not usually exercise any special or additional powers, and merely have a presidential function as the tribunal member who sets the agenda.[7] Where a member of the tribunal is an umpire, they usually do not exercise any influence on proceedings, unless the other arbitrators are unable to agree — in such cases, then the umpire steps in and makes the decision alone.

In some legal systems, it used to be common for each party to the dispute to appoint an arbitrator and for those two arbitrators to appoint a third arbitrator (who may or may not be called an umpire). However, the two arbitrators appointed by the parties to the dispute would essentially act as advocates for the party who appointed them, and the umpire would effectively act as a sole arbitrator. Such systems can lead to difficulty, as other countries may be reluctant to enforce an arbitration award where two of the three "arbitrators" are clearly unable to demonstrate impartiality or independence. The standards for enforcing such awards are set out in the New York Convention, as interpreted by local law.[8]

The authority of an arbitrator is personal, and an appointment ceases upon death.

Unless the parties have otherwise provided, the death of a party does not usually revoke the appointment of any arbitrator appointed by the deceased, and any agreement relating to the appointment is enforceable in the usual way against the personal representatives of the deceased.

If a vacancy arises (through resignation or death, or otherwise) then the parties are free to agree:

Most legal systems provide that, in default of agreement, a new arbitrator shall be appointed using the provision for appointments which applied to the original arbitrator that has vacated office;[9] the tribunal itself (once reconstituted) should determine whether, and if so, to what extent, previous proceedings stand; and the appointments and orders made by the previous arbitrator are unaffected.

It is generally accepted that an arbitrator is not liable for anything done or omitted to be done in the discharge of his or her duties as an arbitrator unless bad faith is shown. At common law this point was thought to have been left open,[11] but in most jurisdictions it is accepted that arbitrators should enjoy immunity provided that they act in good faith in the same manner (and for much the same reasons) as judges, and some jurisdictions have clarified this by statute.[12]

The doctrine, although continental in origin, has been recognised at common law,[13] and has now been widely codified into national law.[14]

An "arbitration hearing" can be either procedural or evidentiary. As in court systems, a "procedural hearing" focuses exclusively on how the proceedings are to be conducted. An "evidentiary hearing" is the equivalent to what in the courts of many countries would be called a trial, with the presentation of evidence in the form of documents and witnesses. Although evidentiary hearings are generally available as a means to assist the arbitral tribunal in deciding contested factual issues, arbitration rules do not usually require them and leave the means of decided disputed factual issues to the discretion of the tribunal. Many decisions of arbitral tribunals are made without any hearing at all.

Where it may be appropriate to do so, arbitral tribunals can make decisions solely upon documentary evidence, which may or may not be accompanied by witness statements, which in the US are referred to as affidavits. Witness statements represent the testimony a witness would give if called to testify, and on which the witness is subject to questioning by the arbitral tribunal and, at times, cross examination by the other party.

Specific types of arbitration, for example, may rely exclusively on documents to decide disputes, such as in the growing field of online dispute resolution. As part of their organizational bylaws or standard terms and conditions, some organizations may also provide that disputes shall be arbitrated without an oral hearing and upon documentary evidence only, an example being certain trade associations, such as GAFTA

However, in almost all countries the tribunal owes several non-derogable duties. These will normally be:

Matters of procedure are normally determined either by the law of the seat of the arbitration, or by the tribunal itself under its own inherent jurisdiction (depending on national law). Procedural matters normally include:

Provisions relating to appeals vary widely between different jurisdictions, but most legal systems recognise that the right to appeal (or, technically, the right to seek to set aside) an award in an arbitration should be limited.

Usually such challenges are made on one of two bases:

In some jurisdictions it is also possible to appeal against an award on a point of law, however, such appeals normally require either the permission of the other parties, or the leave of the court.[17]

Specialised arbitration organizations have been formed in order to settle disputes in the matter of specialised issues, they work in only a very limited field but are highly specialised in the work they do. For this purpose they have made a special rules, procedures and regulations which they follow during the proceedings of arbitration. These institutions prove very useful in the cases where a very deep and specialised knowledge is needed in settlement, which in turn can be cost effective and time saving.

Such specialised institutions include: