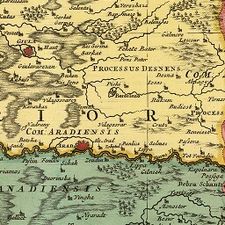 Arad on an 18th-century map

listen); Hungarian: Arad; Serbian: Арад/Arad) is the capital city of Arad County, historically situated in the region of Crișana, and having extended into the neighboring Banat region in the 20th century.[2] Arad is the third largest city in Western Romania, behind Timișoara and Oradea, and the 12th largest in Romania, with a population of 159,704.

A busy transportation hub on the Mureș River and an important cultural and industrial center, Arad has hosted one of the first music conservatories in Europe,[3][4] one of the earliest normal schools in Europe[5], and the first car factory in Hungary and present-day Romania.[6] Today, it is the seat of a Romanian Orthodox archbishop and features a Romanian Orthodox theological seminary and two universities.

The city's multicultural heritage is owed to the fact that it has been part of the Kingdom of Hungary, the Eastern Hungarian Kingdom, the Ottoman Temeşvar Eyalet, Principality of Transylvania, Austro-Hungarian Empire, and since 1920 Romania, having had significant populations of Hungarians, Germans, Jews, Serbs, Bulgarians[7] and Roma[8] at various points in its history. During the second half of the 19th century and the beginning on the 20th century, the city has experienced rapid development. The most impressive displays of architecture that are still the popular sights of Arad today, such as the neoclassical Ioan Slavici Theater, the eclectic Administrative Palace and the neogothic Red Church, have been built in this period.

The first Dacian settlements appear in the 1st millennium BC. In the 5th century a group of Scythians settled in the region but were assimilated by the Dacians. And between the 4th and 3rd centuries, the Celts settled on both banks of the Mureş River, in the vicinity of the existing settlements. The coexistence of the Celts lasted about two centuries and ended with their assimilation by the numerous Dacians.

The Dacian settlement in the south of the Micălaca district was conquered by the Roman troops between 101 and 102. During the Second Dacian War (105-106), the Emperor Trajan conquered territories north of Mureş River, making them part of the Roman Dacia. In the Aradul Nou area, the Roman army built the fort Castra of Aradul Nou that housed the legion Legio IV Flavia Felix. During the period between the 2nd and 4th centuries Dacian and Sarmatian settlements were present in the area of today's city, with intense commercial relations with the Roman Empire.

The first evidence of Slavic assimilation by Proto-Romanians appeared with the 4th century. The settlements dated to the second half of the 1st millennium were concentrated in the northern part of Mures River, among them the one from Vladimirescu-Schanzen, dated in the 8th and 9th centuries, according to the examinations from archaeological discoveries.

In the 10th century the Hungarians began their expansion in Transylvania, one of the main access routes being the valley of Mureş. Ruler Glad, under the threat of the Hungarian land-taking, built a fortress at Vladimirescu-Schanzen which was conquered and destroyed by the Hungarians in the middle of the tenth century. Another ruler, Achtum, rebuilt it but the fortress was once again destroyed in 1028 by another Hungarian attack.

Arad was first mentioned in documents in the 11th century. The Mongol invasion of the Kingdom of Hungary in 1241 showed the importance of the fortifications on this place, to which were added in the second half of the 13th century more stone fortresses at Șoimoș, Șiria, and Dezna. The Ottoman Empire conquered the region from Hungary in 1551 and kept it until the Peace of Karlowitz of 1699. Arad became an eyalet center, which comprised the sanjaks of Arad, Lugoj, Kacaș, Beşlek and Yanova from 1660 till 1697, when it was captured by Austrians (Serbian Militia under command of Subota Jović) during Ottoman-Habsburg wars (1683–1699). After 1699, the city was ruled by the Habsburg Monarchy. At the beginning of the 18th century, Arad became the center of the Eastern Orthodox Eparchy of Arad. According to 1720 data, the population of the city was composed of 177 Romanian families, 162 Serbian, and 35 Hungarian.[10]

The first Jew allowed to settle inside the city was Isac Elias in 1717.[11] Eventually the Jewish population of Arad numbered over 10,000 people, more than 10% of the population, before the Second World War.[12]

The new fortress was built between 1763 and 1783. Although it was small, it proved formidable having played a great role in the Hungarian struggle for independence in 1849. The city possesses a museum containing relics of this war of independence.[13]

Courageously defended by the Austrian general Berger until the end of July 1849, it was captured by the Hungarian rebels, who made it their headquarters during the latter part of the Hungarian Revolution of 1848. It was from Arad that Lajos Kossuth issued his famous proclamation (11 August 1849), and where he handed over the supreme military and civil power to Artúr Görgey.[13]

The fortress was recaptured shortly after the surrender at Világos (now Șiria, Romania), with the surrender of general Artúr Görgey to the Russians. It became an ammunition depot. Thirteen rebel generals were executed there on 6 October 1849, by order of the Austrian general Julius Jacob von Haynau. These men are known collectively as the 13 Martyrs of Arad, and since then Arad is considered the "Hungarian Golgotha". One of the public squares contains a martyrs' monument, erected in their memory. It consists of a colossal figure of Hungary, with four allegorical groups, and medallions of the executed generals.[13]

Arad enjoyed great economic development in the 19th century. In 1834 it was declared a "free royal town" by Emperor Francis I of Austria.

Aradu Nou / Neu Arad / Újarad ("New Arad"), situated on the opposite bank of the Mureș river, is a neighborhood of Arad, to which it is connected by the Trajan bridge. It was founded during the Turkish wars of the 17th century. The works erected by the Turks for the capture of the fortress of Arad formed the nucleus of the new settlement.[13]

Arad has a continental climate with cool and damp winters. The summers are warm to hot. In the summer months of June, July and August there are 60 days above 32 °C (90 °F). The Köppen Climate Classification subtype for this climate is "Cfb" (Marine West Coast Climate/Oceanic climate).[18]

With a rich industrial and commercial tradition, Arad is one of the most prosperous cities in Romania. Thanks to numerous investments in industry and commerce, Arad has a booming economy.[citation needed] 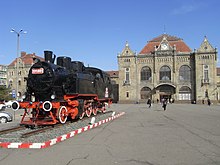 Arad is the most important trans-European road and rail transportation junction point in western Romania, included in the 4th Pan-European Corridor linking Western Europe to South-Eastern European and Middle Eastern countries. The city has an extensive tram network and several bus lines covering most of the city's neighbourhoods and suburbs. Arad International Airport (IATA: ARW, ICAO: LRAR), with the largest and most modern cargo terminal in western Romania, is situated only 4 km west from central Arad and is directly connected to the Arad west bypass road, part of the A1 Motorway.

The Lutheran Red Church in Arad 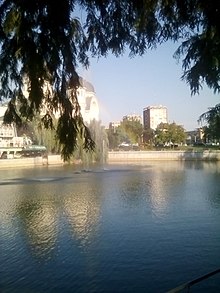 This is a picture of a park in Podgoria, Arad. In the background you can see the Holy Trinity Cathedral and some ten story buildings.

The Statue of Liberty 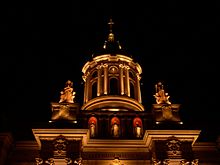 Arad has two universities, the private "Vasile Goldiș" Western University, founded in 1990, and the public Aurel Vlaicu University founded in 1991. Also the "Spiru Haret" long-distance studies University has a branch in Arad.

There are about two dozen high schools, some of the more famous being the Moise Nicoară National College, the Pedagogical High School "Dimitrie Țichindeal", "Elena Ghiba-Birta" National College, the Economics College, the Technical College for Constructions and Environmental Protection Arad, and the Vasile Goldiș theoretical lyceum. High schools in minority languages include the Hungarian Csiky Gergely College and the German Adam Müller-Guttenbrunn theoretical lyceum.

The UTA Arad (formerly ITA) football team was founded in 1945 and has won six Romanian championships and two Romanian Cups. As of the 2019–20 season, it plays in the second national league, Liga II. The team has won more league titles than any other team that is not based in Bucharest, and the third most after Steaua and Dinamo[citation needed]; it is the 3rd more successful modern team in the country and 4th counting Venus Bucharest, a team from the Inter-War period. The team's most notable performance on the international stage is the elimination from the European Champions Cup of Ernst Happel's Feyenoord in the 1970–71 season, when the Dutch team were defending European champions and later won the Intercontinental Cup.

In basketball, the women's ICIM and the men's West Petrom teams have national prominence, their record including some recent national championship wins (ICIM in 1998 through 2001, West Petrom in 2001 and 2002). In men's water polo, Astra Arad also plays in the first division. The men's rugby team Contor Group Arad plays in the National Rugby League, reaching the playoff final in 2006.

World Champion and Olympic medalist in gymnastics Emilia Eberle was born in Arad.