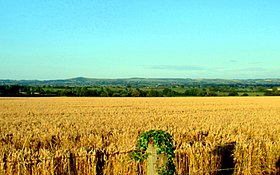 Modern mechanised agriculture permits large fields like this one in Dorset, England

Arable land (Latin: arabilis, "able to be plowed") is any land capable of being ploughed and used to grow crops.[1] Alternatively, for the purposes of agricultural statistics,[2] the term often has a more precise definition: "Arable land is the land under temporary agricultural crops (multiple-cropped areas are counted only once), temporary meadows for mowing or pasture, land under market and kitchen gardens and land temporarily fallow (less than five years). The abandoned land resulting from shifting cultivation is not included in this category. Data for 'Arable land' are not meant to indicate the amount of land that is potentially cultivable."[3] A more concise definition appearing in the Eurostat glossary similarly refers to actual rather than potential uses: "land worked (ploughed or tilled) regularly, generally under a system of crop rotation".[4]

Non-arable land can sometimes be converted to arable land through methods such as loosening and tilling (breaking up) of the soil, though in more extreme cases the degree of modification required to make certain types of land arable can be prohibitively expensive.[5] In Britain, arable land has traditionally been contrasted with pasturable land such as heaths, which could be used for sheep-rearing but not as farmland. 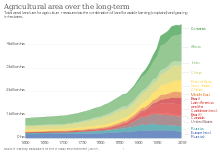 Global agricultural area from 1600 to 2016
Further information: Land use statistics by country

According to the Food and Agriculture Organization of the United Nations, in the year 2013, the world's arable land amounted to 1,407 million hectares, out of a total of 4,924 million hectares of land used for agriculture.[7] 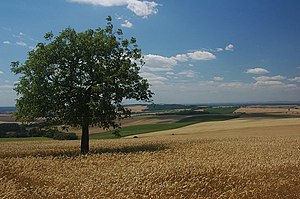 Fields in the region of Záhorie in Western Slovakia 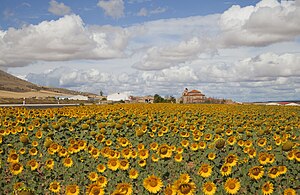 A field of sunflowers in Cardejón, Spain 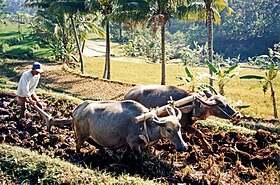 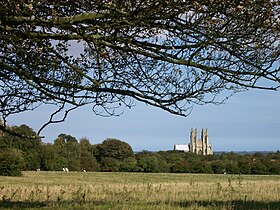 A pasture in the East Riding of Yorkshire in England

Agricultural land that is not arable according to the FAO definition above includes:

Other non-arable land includes land that is not suitable for any agricultural use. Land that is not arable, in the sense of lacking capability or suitability for cultivation for crop production, has one or more limitations – a lack of sufficient fresh water for irrigation, stoniness, steepness, adverse climate, excessive wetness with impracticality of drainage, and/or excessive salts, among others.[10] Although such limitations may preclude cultivation, and some will in some cases preclude any agricultural use, large areas unsuitable for cultivation may still be agriculturally productive. For example, US NRCS statistics indicate that about 59 percent of US non-federal pasture and unforested rangeland is unsuitable for cultivation, yet such land has value for grazing of livestock.[11] In British Columbia, Canada, 41 percent of the provincial Agricultural Land Reserve area is unsuitable for production of cultivated crops, but is suitable for uncultivated production of forage usable by grazing livestock.[12] Similar examples can be found in many rangeland areas elsewhere.

Land incapable of being cultivated for production of crops can sometimes be converted to arable land. New arable land makes more food, and can reduce starvation. This outcome also makes a country more self-sufficient and politically independent, because food importation is reduced. Making non-arable land arable often involves digging new irrigation canals and new wells, aqueducts, desalination plants, planting trees for shade in the desert, hydroponics, fertilizer, nitrogen fertilizer, pesticides, reverse osmosis water processors, PET film insulation or other insulation against heat and cold, digging ditches and hills for protection against the wind, and installing greenhouses with internal light and heat for protection against the cold outside and to provide light in cloudy areas. Such modifications are often prohibitively expensive. An alternative is the seawater greenhouse, which desalinates water through evaporation and condensation using solar energy as the only energy input. This technology is optimized to grow crops on desert land close to the sea.

(Note: The use of artifices does not make land arable. Rock still remains rock, and shallow less than 6 feet turnable soil is still not considered toilable. The use of artifice is an open-air none recycled water hydroponics relationship.[clarification needed] The below described circumstances are not in perspective, have limited duration, and have a tendency to accumulate trace materials in soil that either there or elsewhere cause deoxygenation. The use of vast amounts of fertilizer may have unintended consequences for the environment by devastating rivers, waterways, and river endings through the accumulation of non-degradable toxins and nitrogen-bearing molecules that remove oxygen and cause non-aerobic processes to form.)

Examples of infertile non-arable land being turned into fertile arable land include:

Examples of fertile arable land being turned into infertile land include: