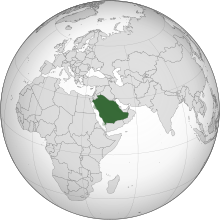 Saudi Arabia Standard Time (Arabic: التوقيت القياسي السعودي‎, romanized: At-Tawqīt al-qiyāsiyy as-suʿūdiyy), abbreviated as SAST, is the standard time zone of Saudi Arabia. The time zone is 3 hours ahead of UTC (UTC+03:00) with no daylight savings.[1] SAST is defined by the 45th Meridian East. Before a standardized time zone was introduced, the country used Arabic time, in which clocks were set to midnight at sundown. Because of confusion between various other systems also used in the kingdom, the standardized use of a time zone was established.[2]

Until 1968, Saudi Arabia used Arabic time, where clocks were set to 12 o'clock at sunset or when the call to prayer for the sunset prayer was heard.[3]:381 This was because the Islamic calendar defines sunset as marking the beginning of a new day.[3]:xii However this later conflicted with the introduction of western sun time, which defined, in congruence with Europe, the start of a new day to be midnight. With western sun time, clocks were set to six o'clock at sun set. While western sun time was intended to be approximately equal to GMT+3, it being reliant on sunset time, which changed with the seasons, meant that large disparity could emerge between western sunset time and GMT+3 as seasons progressed.

In addition to this, the American Military Assistance Advisory Group introduced "Zulu time" which was aligned with GMT+4. Saudi Air used GMT+3 for most of the country, except for Dahran which was set at GMT+4. The American Arabian Oil Company, used to also observe daylight savings for its headquarters in Dahran. Similarly, the Trans-Arabian Pipeline Company also observed daylight savings for its pumps in the east of the country.[2]

The kingdom adopted a standardized time zone, three hours ahead of GMT (GMT+3) on 14 March, 1947 (according to IANA's tz database).[4]

The IANA time zone database contains one zone for Saudi Arabia in the file zone.tab, which is named Asia/Riyadh.