Apulia (/əˈpuːliə/ ə-POO-lee-ə; Italian: Puglia [ˈpuʎːa]; Neapolitan: Pùglia [ˈpuʝːə];[a] Albanian: Pulia; Ancient Greek: Ἀπουλία, romanized: Apoulía) is a region of Italy, located in the southern peninsular section of the country, bordering the Adriatic Sea to the east, the Ionian Sea to the southeast, and the Strait of Otranto and Gulf of Taranto to the south. The region comprises 19,345 square kilometers (7,469 sq mi), and its population is about four million.

It is bordered by the other Italian regions of Molise to the north, Campania to the west, and Basilicata to the southwest. Its capital city is Bari.

Apulia's coastline is longer than that of any other mainland Italian region. In the north, the Gargano promontory extends out into the Adriatic like a 'sperone' ("spur"), while in the south, the Salento peninsula forms the 'tacco' ("heel") of Italy's boot.[4] The highest peak in the region is Mount Cornacchia [it] (1,152 meters above sea level) within the Daunian Mountains, in the north along the Apennines.

Outside national parks in the North and West, most of Apulia and particularly Salento is geographically flat with only moderate hills.

The climate is typically Mediterranean with hot, dry and sunny summers and mild, rainy winters. Snowfall, especially on the coast is rare but has occurred as recently as January 2019 (following on from snow in March 2018 and January 2017). Apulia is among the hottest and driest regions of Italy in summer with temperatures sometimes reaching up to and above 40 °C in Lecce and Foggia.

The coastal areas, particularly on the Adriatic and in the southern Salento region are frequently exposed to winds of varying strengths and directions, strongly affecting local temperatures and conditions, sometimes within the same day. The Northerly Bora wind from the Adriatic can lower temperatures, humidity and moderate summer heat while the Southerly Sirocco wind from North Africa can raise temperatures, humidity and occasionally drop red dust from the Sahara. On some days in spring and autumn, it can be warm enough to swim in Gallipoli and Porto Cesareo on the Ionian coast while at the same time, cool winds warrant jackets and sweaters in Monopoli and Otranto on the Adriatic coast. 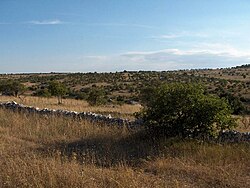 Landscape of the Murge plateau 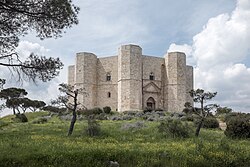 Castel del Monte, built by the Holy Roman Emperor Frederick II between 1240 and 1250 in Andria 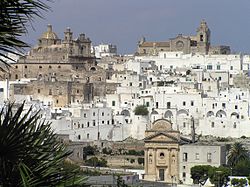 The medieval town of Ostuni

Apulia is one of the richest archaeological regions in Italy. It was first colonized by Mycenaean Greeks.[6]

Some parts of the regions were conquered by the Muslim Saracens, and the Emirate of Bari was established for a brief period of time by Muhammad Abul Abbas of Sicily.

A number of castles were built in the area by Holy Roman Emperor Frederick II, including Castel del Monte,[7] sometimes called the "Crown of Apulia".[8]

Apulia was an autonomous duchy until 1130 when its duke became king of Sicily. After 1282, when the kingdom lost the island of Sicily itself, Apulia remained part of the remnant Kingdom of Naples (confusingly known also as the Kingdom of Sicily), and remained so until the unification of Italy in 1861. This kingdom was independent under the House of Anjou from 1282 to 1442, then was part of Aragon until 1458, after which it was again independent under a cadet branch of the House of Trastámara until 1501. As a result of the French–Spanish war of 1501–1504, Naples again came under the rule of Aragon and the Spanish Empire from 1504 to 1714. When Barbary pirates of North Africa sacked Vieste in 1554, they took an estimated 7,000 slaves.[9] The coast of Apulia was occupied at times by the Turks and at other times by the Venetians.[10]

The region's contribution to Italy's gross value added was around 4.6% in 2000, while its population was 7% of the total. The per capita GDP is low compared to the national average and represents about 68.1% of the EU average.[12]

The share of gross value added by the agricultural and services sectors was above the national average in 2000. The region has industries specialising in particular areas, including food processing and vehicles in Foggia; footwear and textiles in the Barletta area, and wood and furniture in the Murge area to the west.[13]

Between 2007 and 2013 the economy of Apulia expanded more than that of the rest of southern Italy.[14] Such growth, over several decades, is a severe challenge to the hydrogeological system.[15]

The olive oil industry in Apulia is under threat from the pathogen Xylella fastidiosa, a disease which inhibits the uptake of water and nutrients by the trees. The south-eastern part of the region is at the centre of the epidemic.

The region has a good network of roads, but the railway network is less comprehensive, particularly in the south.[13] The region is crossed northwest to southeast by the A14 highway (Bologna–Taranto), which connects the region capital, Bari, to Taranto, the second most populous city in the region. The A14 also connects Foggia and points further north along the Adriatic coast to Pescara, Ancona, Rimini and eventually, Bologna. The only other highway in the region is the A16 (Napoli–Canosa), which crosses the Italian peninsula east–west and links the region with Napoli.

There are two international airports, Karol Wojtyla Airport in Bari (IATA: BRI) and Brindisi Airport (IATA: BDS), which serves as the principal logistical hub for the United Nations Global Service Center headquartered in Brindisi. With the approval of a redevelopment project in 2018, the Grottaglie Airfield (IATA: TAR) will host a spaceport for the Italian Space Agency and Virgin Galactic.

Emigration from the region's depressed areas to northern Italy and the rest of Europe was very intense in the years between 1956 and 1971. Subsequently, the trend declined, as economic conditions improved, to the point where there was net immigration in the years between 1982 and 1985. Since 1986 the stagnation in employment has led to a new inversion of the trend, caused by a decrease in immigration.[23]

Since 1 June 2015, former judge and mayor of Bari Michele Emiliano of the Democratic Party has served as President of the Apulian region.[24][25]

As with the other regions of Italy, the national language (since 1861) is Italian. However, because of its long and varied history, other historical languages have been used in this region for centuries. In isolated pockets of the southern part of Salento, a dialect of Greek called Griko is still spoken by a few thousand people.[27] In addition, rare dialects of the Franco-Provençal language called Faetar and the closely related Cellese are spoken by a dwindling number of individuals in the mountain villages of Faeto and Celle di San Vito, in the Province of Foggia.[28] The Arbëreshë dialect of the Albanian language has been spoken by a small community since refugees settled there in the 15th century.[29]