Apocalyptica is a Finnish symphonic metal band from Helsinki, Finland, formed in 1993. The band is composed of classically trained cellists Eicca Toppinen, Paavo Lötjönen, and Perttu Kivilaakso (all three of whom are graduates of the Sibelius Academy in Helsinki),[5] and drummer Mikko Sirén. Originally a Metallica classical tribute band, the band eventually adopted a neoclassical metal style without the use of conventional guitars.[2] They have sold over four million albums to date.[6]

Antero Manninen left the group in 1999 and was replaced by Perttu Kivilaakso. Perttu had previously performed with the band in 1995. Apocalyptica released their third studio album, Cult, in 2000. It featured 10 original songs and 3 covers. The first Apocalyptica track to include vocals, "Path Vol. 2", was released shortly after Cult. Max Lilja left the group in 2002 and joined Hevein.

Apocalyptica released their fourth studio album, Reflections, in 2003. It featured all original songs. Reflections featured an experimental sound different from the acoustic arrangements of Inquisition Symphony and Cult. Dave Lombardo from Slayer played drums on five songs from Reflections. Session drummer, Sami Kuoppamäki, covered the rest. When Lombardo declined the following tour, Apocalyptica hired Mikko Sirén, who would stay with the band for future tours as well as the recording of the next album.

Apocalyptica released their self-titled fifth studio album in 2005 which featured Ville Valo of HIM, Lauri Ylönen of The Rasmus, and Dave Lombardo.

Apocalyptica was on the track "Intro" from Bullet for My Valentine's album The Poison in 2005. The group performed with Marta Jandová and represented Baden-Württemberg in the Bundesvision Song Contest 2005 with the song "Wie weit", placing 5th with 77 points.[7] Mikko Sirén became an official band member in December 2005 having played around 200 shows with the band. 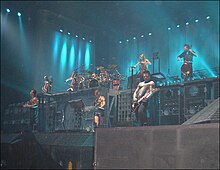 Apocalyptica performing with Rammstein in Milan in 2005

Apocalyptica released their sixth studio album, Worlds Collide, on September 17, 2007. It was produced by Jacob Hellner. To the surprise of many, the album includes a remake of the German version of David Bowie's song "Heroes". Till Lindemann of Rammstein, for whom they opened on the Reise, Reise tour, was the guest vocalist on the track "Helden".[8] Worlds Collide was released on April 15, 2008 in the United States. The first single, "I'm Not Jesus" featuring Corey Taylor of Slipknot and Stone Sour, cracked the top 10 of both the Active rock and Alternative rock charts.

To end 2007, the band toured Europe, selling out many of the venues they played.[citation needed] In 2008 the tour continued in the United States and included numerous festivals in Europe.

In June 2008, during the Rock in Rio concert in Lisbon, Apocalyptica joined the Greenpeace "energy [r]evolution campaign" and played the Beethoven 5th symphony from the stage.[9]

The band also appeared on Last Call with Carson Daly on October 31, 2008. Here they made their American television debut with a performance of "I Don't Care" with Toryn Green.

In November 2008, Apocalyptica featuring Adam Gontier of Three Days Grace hit first at the BDS and Mediabase Active Rock radio charts with the single "I Don't Care". Later that month, the band ranked 3rd on Billboard's Hot Modern Rock Track chart and 2nd on Billboard's Hot Mainstream Rock Tracks chart just after AC/DC and just ahead of Metallica, an ironic twist since the band's origins lie in performing Metallica covers. Recently, it reached No. 1 on the Billboard rock chart, making Apocalyptica the first Finnish band to top the US charts. The song "I Don't Care" was also featured in the 16th episode of Season 8 of the TV series Smallville, which aired on March 19, 2009.

The album features eight instrumentals plus four tracks with guest vocals.[11] The first single, "End of Me", features Gavin Rossdale, vocalist from the British alternative rock band Bush, who had previously collaborated with the band. Slayer drummer Dave Lombardo played on "2010." "Bring Them to Light" features Joseph Duplantier, singer and guitarist from the French death metal band Gojira. "Broken Pieces" is a collaboration with Flyleaf singer Lacey Mosley. "Not Strong Enough" was performed by Brent Smith, vocalist from (Shinedown).[10] "Not Strong Enough" was re-recorded with Doug Robb of Hoobastank before being released to US radio on January 18, 2011 due to distribution rights.[12]

On October 7, 2011, RCA Music Group announced it was disbanding Jive Records along with Arista Records and J Records. With the shutdown, the band (and all other artists previously signed to these three labels) will release their future material on the RCA Records brand.[13][14]

Apocalyptica performed live with Metallica on three songs, "No Leaf Clover", "One" and "Seek & Destroy" in celebration of Metallica's 30th Anniversary on December 5, 2011.

Apocalyptica took a year off from touring and recording after concluding the 7th Symphony world tour in Beijing September 2012.[16] During the break the band worked on a crossover musical and theatrical project titled Wagner Reloaded, combining Wagner's music with the sound of Apocalyptica, to celebrate German composer Richard Wagner's 200th birthday. There were two live performances in Wagner's birth town Leipzig, Germany on July 5 and 6, 2013. Eicca Toppinen arranged and composed the music for the production.[17] The band released an album titled Wagner Reloaded-Live in Leipzig, in November 2013.[18]

Apocalyptica released "Psalm" on May 10, 2013. It was performed by Perttu Kivilaakso on their most recent tour. The band also announced a tour with Finnish Avanti! Chamber Orchestra, which premiered in March 2014. The set will consist solely of instrumentally performed Apocalyptica songs, especially arranged for the band and the 25-piece orchestra.[19]

Their eighth studio album, titled Shadowmaker, with Franky Perez singing on all vocal tracks, was released through Better Noise imprint of Eleven Seven Music on April 17, 2015.[20] They also released a collaborative single with Vamps titled "Sin in Justice" on November 20.[21]

Apocalyptica made the music for the episode "On Finn Ice" of Rovio Entertainment's video game Angry Birds Seasons.

Apocalyptica celebrated their 20th anniversary of the first album Plays Metallica by Four Cellos in 2016 and it was re-released with 3 brand new bonus tracks. The band toured with Antero Manninen, who returned after eight years to play on the tour.[citation needed]

Following Manninen's departure from the band in late 2018, they brought in a new touring member, Lauri Kankkunen, the first cellist of the Helsinki Chamber Orchestra, to continue on the 20th anniversary tour in April 2019.[citation needed]

In February 2019, the band released their first single with Finnish lyrics, featuring Sanni and Tippa. They performed the song at the 2019 Emma Gala in Helsinki.[22]

The band's ninth studio album, an instrumental, Cell-0 was released on January 10, 2020.