The Antwerp Premetro is a network consisting of lines 2, 3, 5, 6, 8, 9, 10 and 15 of the Antwerp Tram system. It is a metre gauge system, which runs underground in the city centre and further out on surface lines, which are mostly separated from motor vehicle traffic. The network is operated by De Lijn. 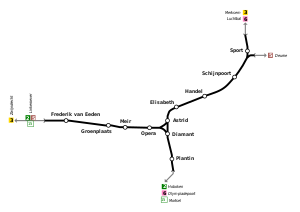 The network was planned at the beginning of the 1970s to become a fully underground network similar to the Brussels Metro or German Stadtbahnen (light railways), with a length of 15 km and comprising 22 stations. However, due to financial difficulties, only 18 stations have been built and six of those are still unused.

The first 1.3 km section opened on 25 May 1975 between Opera and Groenplaats, including station Meir. This line was extended to reach Diamant and Plantin in 1980 and Van Eeden in 1990. A north-eastern branch was opened in 1996, including the stations Sport, Schijnpoort, Handel, Elisabeth and Astrid, connecting to the existing line between Opera and Diamant.

In the original plan a second axis was proposed from the south-western suburbs via Opera and Astrid to the eastern district Deurne. A metro tunnel was built under the Turnhoutsebaan in Borgerhout, as well as some shorter tunnels, as a part of these plans. However, construction stopped in the 1980s due to lack of funds. Although the tunnel itself was largely completed, the stations still had to be decorated and the track still had to be laid. Under the Pegasus plan (approved in 2004) it was decided to finally open this unused premetro tunnel, although, to reduce the costs of the project, it was decided only to open Zegel station. The stations Carnot, Drink, College and Morckhoven were not opened, but fitted to be used as emergency exits. This axis was opened partially in 2015.

A second entrance from Deurne Turnhoutsebaan towards the "Reuzenpijp"-tunnel under Borgerhout was openend in september 2017. Underground station Foorplein remains unused.

A tunnel linking Schijnpoort on the first axis with Carnot on the second one is still not in use. 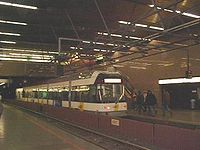 Tram on Line 15 to Mortsel at Meir pre-metro station 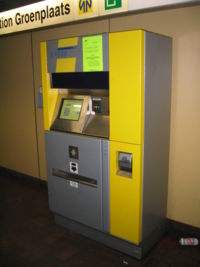 The stations Astrid and Opera were originally only partly opened, both having unused platforms inaccessible to travellers. However, the unused platforms on the −1 level in Astrid station were opened on 18 April 2015 as a part of the opening of the eastern premetro axis (the Reuzenpijp).[1] In 2016, works have started on the renovation and extension of Opera station, as part of the Noorderlijn project. The unused platforms will be put into use upon completion of the renovation and the construction of a premetro entrance on the Leien just south of the station.[2]

Underground station Foorplein will probably only remain used as an emergency exit.

Different political factions urge for the opening of the stations Carnot, Collegelaan and mostly Drink. Unused station Drink is situated in the middle of the densely populated district Borgerhout (intra-muros). However, there is no agreement about the opening of the remaining unused tunnel and stations of the Antwerp pre-metro, and there is no specific timing.

More information about the "Sleeping Premetro" in Dutch