listen)) is the northernmost province both of the Flemish Region, also called Flanders, and of Belgium. It borders on North Brabant province of the Netherlands to the north and the Belgian provinces of Limburg, Flemish Brabant and East Flanders. Its capital is Antwerp which comprises the Port of Antwerp, which is the second largest seaport in Europe. It has an area of 2,876 km2 (1,110 sq mi) and with over 1.85 million inhabitants as of January 2019, it is the country's most populous province. The province consists of 3 arrondissements: Antwerp, Mechelen and Turnhout. The eastern part of the province comprises the main part of the Campine region.

During the early Middle Ages the region was part of the Frankish Empire, which was divided into several pagi. The territory of the present day province belonged to several pagi of which the region around what would become the city of Antwerp belonged to the Pagus Renesium. The Pagus Toxandria stretched from North Brabant into the Campine region. To the south there was the Pagus Bracbatinse and the Pagus Hasbaniensis. In 843 the Carolingian Empire of Charlemagne was divided among his sons and the river Scheldt became the border between West Francia and East Francia. In 974 Otto II established the Margraviate of Antwerp as a defence against the County of Flanders. 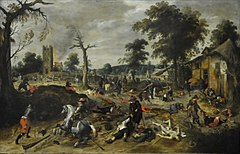 The aftermath of the plundering of the village of Wommelgem in 1589. Eighty Years' War, painting by Sebastiaen Vrancx.

In 1106, Henry V granted the Margraviate to Godfrey I of Leuven. His descendants would from 1235 onwards become the Dukes of Brabant and the region itself was the northern part of the Duchy of Brabant. In 1430 the Duchy became part of the Duchy of Burgundy until 1477 when it fell to the House of Habsburg. In 1713, at the end of the Spanish Succession War the region became part of the Austrian Netherlands until 1794, with in 1790 the short lived United States of Belgium. On 1 October 1795 the former Austrian Netherlands were annexed by France under the French Directory.

The modern province was created as the Department of the two Netes during the First French Empire (when the Southern Netherlands were part of France). After the defeat of Napoleon, the territory became part of the United Kingdom of the Netherlands as the province of Central Brabant, distinguishing it from North Brabant and South Brabant. In 1830, after Belgium's independence the province was renamed Antwerp (after its major city and capital).

Governors of the Belgian province of Antwerp

As in all Flemish provinces, the official and standard language of the Antwerp province is Dutch. Common with Flemish Brabant, North Brabant and Brussels, the local dialect is a Brabantian variety.

The province of Antwerp has a provincial council, elected every six years, and an executive deputation headed by a governor. The current governor is Cathy Berx, appointed in 2008 by the Flemish Government.

The last elections were held on 14 October 2018. The following parties were elected to the 36-member council:

The province has a network of roads, railroads, canals and rivers which provide a modern infrastructure. Historically, the traffic infrastructure was an important element of connecting the Port of Antwerp with the Ruhr Area in North Rhine-Westphalia, Germany. Both the Iron Rhine railroad and the E313 (King Baudouin highway) and E34 highway connect Antwerp with the Ruhr Area.

The river Schelde, an important waterway, connects the Port of Antwerp with the North Sea. The Albert Canal connects the Scheldt in Antwerp with the Meuse and Liège. Other canals are the Canal Dessel – Kwaadmechelen, Schoten – Turnhout – Dessel, and Herentals – Bocholt which flows into the Nete canal.

Of the International E-road network, the E313, E19, and E34 run through parts of the province. The Kennedy Tunnel and the Liefkenshoek Tunnel connect the highway network of the province with East Flanders and Ghent. In addition a new Oosterweelconnection is under consideration.

The railroads connect the major cities of the province, such as Antwerp, Mechelen, Herentals, Turnhout and Mol. The Iron Rhine connects Antwerp with Mönchengladbach in Germany. The new High Speed Train connects Antwerpen-Centraal railway station with Brussels (HSL 4) and Amsterdam (HSL-Zuid) at high speed. Antwerp International Airport, located in Deurne is a regional airport. 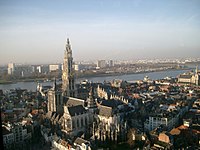 The province harbors several historical cities, such as Antwerp, Mechelen, Turnhout, Herentals and Lier. The Campine region is becoming a popular destination for tourists searching for a quiet and relaxed weekend. Old farms were transformed into bed and breakfast-hotels, the restaurant and café business is very active and an ingenious network for bicycle tours has come to life the past few years. Here and there still up to several dozens acres of large heathland - and forests, such as the Kalmthoutse Heide (E: Kalmthout heathland) in Kalmthout, the moors around Turnhout, the Liereman (Oud-Turnhout) and the Prinsenpark in Retie. In a number of villages one can still see the typical Campine langgevelboerderijen (E: long facade farms).

The province is home to several educational institutions and the University of Antwerp. Several research institutions are located in the province, such as the SCK•CEN, the European Institute for Reference Materials and Measurements (IRMM) and the Flemish Institute for Technological Research (VITO).

The Port of Antwerp is the economic heart of the province. Until the agricultural crisis of 1880, the eastern part of the province was a largely agricultural region. The industrial development of the eastern part of the province, part of the Campine region, started at the end of the 19th century when industry established itself in the region. The availability of cheap labor, new roads, canals, tramways and railroads such as the Iron Rhine, stimulated the settlement of new industry. Brick making industry alongside the canals, paper and printing business in Turnhout. Non-ferrous metallurgy in Balen-Nete, dynamite factories in Arendonk and Balen. Tobacco and cigar factories in Arendonk and the first shoe factory in Herentals. During the 1920s, the industrial expansion of the region continued with the radium and copper factories in Olen, the glass factory in Mol-Gompel and the diamond industry in Grobbendonk and Nijlen.

In the 20th century the first nuclear installation in Belgium was established at the SCK•CEN in Mol in 1962. The European Institute for Reference Materials and Measurements (IRMM), one of the EU Joint Research Centres, was founded in Geel in 1957 as a result of the Treaty of Rome. Innotek is a technology centre located in Geel and is part of the European Business and Innovation Centre Network (EBN). Industry in the Campine region of the province is mainly located alongside the E313, the E34 and the Albert Canal.

The unemployment rate stood at 5.9% in 2017 and was lower than the national average.[7]

After World War II the Port of Antwerp was expanded and on its premises several chemical factories and oil refineries were established, such as Bayer, BASF, Monsanto Company. The chemical and petrochemical industry is widely represented in the port region and comprises the world's second largest cluster of petrochemical industry, next to Houston (United States). In 1967 Amoco Chemical Belgium N.V., now BP, was founded in Geel.

Pharmaceutical industry was founded in Beerse in the 1960s, with Janssen Pharmaceutica and more recently with Genzyme in Geel. Soudal (silicon) in Turnhout and Ravago (plastics) in Arendonk became leading companies in their markets.

While Wallonia was famous for its steel industry, the Campine region became renowned for its non ferrous metallurgies. The Campine region was scarcely populated in the 19th century and with the availability of canals, the Iron Rhine and cheap labor, several metallurgies were established in the region.[9] In 1888-1889 the metallurgy La Vieille Montagne was founded in Balen-Nete, close the Iron Rhine and the canal to Beverlo. The company had its roots in the exploitation of the zinc mines of Moresnet.

In 1872 the Sablières et Carrières Réunies (SCR), now Sibelco, was founded to extract the silica sand layers in Mol for industrial applications (glass). In 1920 the glass bottle manufacture Beles Réunios was set up in Mol-Donk. In 1921 a group of Belgian banks, the Mutuelle Mobilière & Immobilière, the Société Générale de Belgique, the Banque de Bruxelles and the Financière de Transport together with the American group Libbey-Owens founded the Cie Internationale pour la fabrication mécanique de Verre in Mol Gompel. In 1931, due to the economic crisis, the company merged into Glaces et Verres (Glaver).[10] In 1961 Glaver would merge with Univerbel into Glaverbel.

As the Campine region was sparsely populated several dynamite factories were established in the region. In 1875, the Societe Anonyme d'Arendonk was established which premises would later become part of Ravago. In 1881 La Forcite N.V. was established near Balen, which was later acquired in 1920 by the Poudreries Réunies de Belgique (PRB). In 1887 a factory was founded near Herentals, which was closed due to the vicinity to the city. The factories produced explosives for the mines and quarries. The factories in the province are now closed down.

Historically, wool processing industry was based on the wool from the sheep which were kept on the Campine heath. The centre of the textile industry in the province could be found in Turnhout. Wool processing companies such as Wolspinnerij Van Iersel, Spinnerij en Weverij Van Hoof and De Wollendekensfabriek Van Doren were located in Mol.

At the end of the 19th century Arendonk became the centre of the tobacco industry. Additional factories were founded in Turnhout, Mol, Geel and Herentals.[11] After World War II, the ALTO cigar factory was founded by Frans Van den Bergh who would also play an important role at Janssen Pharmaceutica.

The province is divided into three administrative arrondissements (arrondissementen in Dutch) containing 70 municipalities :