Antiochus III the Great /ænˈtaɪəkəs/ (Greek: Ἀντίoχoς Μέγας; c. 241 – 3 July 187 BC, ruled April/June 222 – 3 July 187 BC)[1] was a Macedonian Hellenistic king and the 6th ruler of the Seleucid Empire.[2][3][4] He ruled over the region of Syria and large parts of the rest of western Asia towards the end of the 3rd century BC. Rising to the throne at the age of eighteen in 222 BC, his early campaigns against the Ptolemaic Kingdom were unsuccessful, but in the following years Antiochus gained several military victories and substantially expanded the empire's territory. His traditional designation, the Great, reflects an epithet he assumed. He also assumed the title Basileus Megas (Greek for "Great King"), the traditional title of the Persian kings. A militarily active ruler, Antiochus restored much of the territory of the Seleucid Empire, before suffering a serious setback, towards the end of his reign, in his war against Rome.

Declaring himself the "champion of Greek freedom against Roman domination", Antiochus III waged a four-year war against the Roman Republic beginning in mainland Greece in the autumn of 192 BC[5][6] before being decisively defeated at the Battle of Magnesia. He died three years later on campaign in the east. 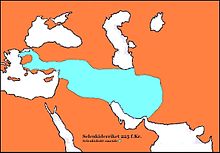 Seleucid Kingdom at the time of Antiochus's accession to the throne.

Antiochus III was a member of the Hellenistic Seleucid dynasty.[7][8][9][10] He was the son of king Seleucus II Callinicus and Laodice II and was born around 242 BC near Susa in Persia.[11] He may have borne a non-dynastic name (starting with Ly-), according to a Babylonian chronicle. He succeeded, under the name Antiochus, his brother Seleucus III Ceraunus, upon the latter's murder in Anatolia; he was in Babylon at the time.[12]

Antiochus III inherited a disorganized state. Not only had Asia Minor become detached, but the easternmost provinces had broken away, Bactria under the Seleucid Diodotus of Bactria, and Parthia under the rebel satrap Andragoras in 247–245 BC, who was himself later vanquished by the nomad chieftain Arsaces. In 222 BC, soon after Antiochus's accession, Media and Persis revolted under their governors, the brothers Molon and Alexander. The young king, under the influence of the minister Hermeias, headed an attack on Ptolemaic Syria instead of going in person to face the rebels. The attack against the Ptolemaic empire proved a fiasco, and the generals sent against Molon and Alexander met with disaster. Only in Asia Minor, where the king's cousin, Achaeus, represented the Seleucid cause, did its prestige recover, driving the Pergamene power back to its earlier limits.[13]

In 221 BC Antiochus at last went far east, and the rebellion of Molon and Alexander collapsed which Polybios attributes in part to his following the advice of Zeuxis rather than Hermeias.[14] The submission of Lesser Media, which had asserted its independence under Artabazanes, followed. Antiochus rid himself of Hermeias by assassination and returned to Syria (220 BC). Meanwhile, Achaeus himself had revolted and assumed the title of king in Asia Minor. Since, however, his power was not well enough grounded to allow an attack on Syria, Antiochus considered that he might leave Achaeus for the present and renew his attempt on Ptolemaic Syria.[13]

Early wars against other Hellenistic rulers 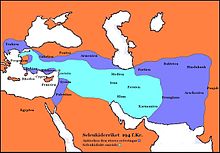 The campaigns of 219 BC and 218 BC carried the Seleucid armies almost to the confines of the Ptolemaic Kingdom, but in 217 BC Ptolemy IV defeated Antiochus at the Battle of Raphia. This defeat nullified all Antiochus' successes and compelled him to withdraw north of Lebanon. In 216 BC his army marched into western Anatolia to suppress the local rebellion led by Antiochus' own cousin Achaeus, and had by 214 BC driven him from the field into Sardis. Capturing Achaeus, Antiochus had him executed. The citadel managed to hold out until 213 BC under Achaeus' widow Laodice who surrendered later.[13]

Having thus recovered the central part of Asia Minor (for the Seleucid government had perforce to tolerate the dynasties in Pergamon, Bithynia and Cappadocia), Antiochus turned to recovering the outlying provinces of the north and east. He obliged Xerxes of Armenia to acknowledge his supremacy in 212 BC. In 209 BC Antiochus invaded Parthia, occupied the capital Hecatompylos and pushed forward into Hyrcania. The Parthian king Arsaces II apparently successfully sued for peace.[13]

The year 209 BC saw Antiochus in Bactria, where the Greco-Bactrian king Euthydemus I had supplanted the original rebel. Antiochus again met with success.[15] Euthydemus was defeated by Antiochus at the Battle of the Arius but after sustaining a famous siege in his capital Bactra (Balkh), he obtained an honourable peace by which Antiochus promised Euthydemus' son Demetrius the hand of Laodice, his daughter.[13][16]

Antiochus next, following in the steps of Alexander, crossed into the Kabul valley, reaching the realm of Indian king Sophagasenus and returned west by way of Seistan and Kerman (206/5).[13] According to Polybius:

He crossed the Caucasus and descended into India, renewed his friendship with Sophagasenus, king of the Indians, and received more elephants, raising their number to a total of one hundred and fifty, and provisioned his army once more on the spot. He himself broke camp with his troops, leaving behind Androsthenes of Cyzicus to bring back the treasure which this king (Sophagasenus) had agreed to give him.[17][16]

From Seleucia on the Tigris he led a short expedition down the Persian Gulf against the Gerrhaeans of the Arabian coast (205 BC/204 BC). Antiochus seemed to have restored the Seleucid empire in the east, which earned him the title of "the Great" (Antiochos Megas). In 205/204 BC the infant Ptolemy V Epiphanes succeeded to the Egyptian throne, and Antiochus is said (notably by Polybius) to have concluded a secret pact with Philip V of Macedon for the partition of the Ptolemaic possessions.[13] Under the terms of this pact, Macedon was to receive the Ptolemaic possessions around the Aegean Sea and Cyrene, while Antiochus would annex Cyprus and Egypt.

Once more Antiochus attacked the Ptolemaic province of Coele Syria and Phoenicia, and by 199 BC he seems to have had possession of it before the Aetolian leader Scopas recovered it for Ptolemy. But that recovery proved brief, for in 198 BC Antiochus defeated Scopas at the Battle of Panium, near the sources of the Jordan, a battle which marks the end of Ptolemaic rule in Judea.[13]

War against Rome and death

Antiochus then moved to Asia Minor, by land and by sea, to secure the coast towns which belonged to the remnants of Ptolemaic overseas dominions and the independent Greek cities. This enterprise earned him the antagonism of the Roman Republic, since Smyrna and Lampsacus appealed to the Republic, which at the time acted as a defender of Greek freedom. The tension grew when Antiochus in 196 BC established a footing in Thrace. The evacuation of Greece by the Romans gave Antiochus his opportunity, and he now had the fugitive Hannibal at his court to urge him on.[13][18]

In 192 BC Antiochus invaded Greece with a 10,000-man army, and was elected the commander in chief of the Aetolian League.[19] In 191 BC, however, the Romans under Manius Acilius Glabrio routed him at Thermopylae, forcing him to withdraw to Asia Minor. The Romans followed up their success by invading Anatolia, and the decisive victory of Scipio Asiaticus at Magnesia ad Sipylum (190 BC), following the defeat of Hannibal at sea off Side, delivered Asia Minor into their hands.[13]

By the Treaty of Apamea (188 BC) Antiochus abandoned all the country north and west of the Taurus, most of which the Roman Republic gave either to Rhodes or to the Attalid ruler Eumenes II, its allies (many Greek cities were left free). As a consequence of this blow to the Seleucid power, the outlying provinces of the empire, recovered by Antiochus, reasserted their independence.[13] Antiochus mounted a fresh eastern expedition in Luristan, where he died while pillaging a temple of Bel at Elymaïs, Persia, in 187 BC.[6]

In 191 BC, Antiochus III married a girl from Chalcis, whom he named "Euboea". They had no children. Laodike III may have fallen in disgrace; however, she clearly survived Antiochus III, and appears in Susa in 183 BC.[21]

Antiochus and the Jews

Antiochus III resettled 2000 Jewish families from Babylonia into the Hellenistic Anatolian regions of Lydia and Phrygia.[22] He is not the king of the Hanukkah story who was resisted by the Maccabees; rather, that was his son, Antiochus IV. On the contrary, Josephus portrays him as friendly towards the Jews of Jerusalem and cognizant of their loyalty to him (see Antiquities, chapter 3, sections 3–4), in stark contrast to the attitude of his son. In fact, Antiochus III lowered taxes, granted subventions to the Temple, and let the Jews live, as Josephus puts it, "according to the law of their forefathers."[23]

Antiochus III is mentioned once in the deuterocanonical Books of the Maccabees. The subject of Maccabees is the Maccabean Revolt against Antiochus' son, Antiochus IV Epiphanes. Chapter 8 of the First Book of the Maccabees describes Judas Maccabeus' knowledge of the deeds of the Roman Republic, including an allusion to the defeat of Antiochus III by the Romans. The NRSV says "They [the Romans] also had defeated Antiochus the Great, king of Asia, who went to fight against them with one hundred twenty elephants and with cavalry and chariots and a very large army. He was crushed by them; they took him alive and decreed that he and those who would reign after him should pay a heavy tribute and give hostages and surrender some of their best provinces, the countries of India, Media, and Lydia. These they took from him and gave to King Eumenes." (1 Maccabees 8:6-8)