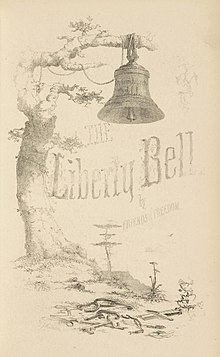 Program for the 29th anniversary of the Anti-Slavery Society

The American Anti-Slavery Society (AASS; 1833–1870) was an abolitionist society founded by William Lloyd Garrison and Arthur Tappan. Frederick Douglass, an escaped slave, was a key leader of this society who often spoke at its meetings. William Wells Brown was also a freed slave who often spoke at meetings. By 1838, the society had 1,350 local chapters with around 250,000 members.

By the 1820s, the controversy surrounding the Missouri Compromise had quieted down considerably, but was revived by a series of events near the end of the decade. Serious debates over abolition took place in the Virginia legislature in 1829 and 1831. (See Thomas Roderick Dew#Dew and slavery.) In the North, discussion began about the possibility of freeing the slaves and then resettling them back in Africa (a proposal that led to the founding of Liberia). Agitation increased with the publication of David Walker's Appeal to the Colored Citizens of the World in 1829, Nat Turner's slave rebellion in 1831, and Andrew Jackson's handling of the nullification crisis that same year. According to Louis Ruchame, "The Turner rebellion was only one of about 200 slave uprisings between 1776 and 1860, but it was one of the bloodiest, and thus struck fear in the hearts of many white southerners. Nat Turner and more than 70 enslaved and free blacks spontaneously launched a rebellion in Southampton County, Virginia, in August 1831. They moved from farm to farm, indiscriminately killing whites along the way and picking up additional slaves. By the time the militia put down the insurrection, more than 80 slaves had joined the rebellion, and 60 whites lay dead. While the uprising led some Southerners[who?] to consider abolition, the reaction in all Southern states was to tighten the laws governing slave behavior."[1][page needed]

That same year, South Carolina's opposition to the federal tariff led the legislature to declare that the law was null and void in the state, and the state's leaders spoke of using the militia to prevent federal customs agents from collecting the tax. President Andrew Jackson swept aside the states' rights arguments and threatened to use the army to enforce federal laws. In the face of Jackson's determination, the state backed down, but the episode raised fears throughout the South that it was only a matter of time before Congress would begin to tamper with slavery. Southern anxiety increased in 1833 with the founding of the American Anti-Slavery Society in Philadelphia.

In the 1820s the focus of anti-slavery was the American Colonization Society, founded on Madisonian principles of gradual, government-compensated emancipation. Consistent with existing and durable prejudices in the nation at the time, President James Madison believed that blacks and whites could not integrate into society together, and thus wanted to institute a policy of separation. Madison said that integration (at the time called "amalgamation") was impossible, because there would always be oppression, hatred, and hostility between former slaves and former slave holders. He also claimed, in his so-called "Memorandum on an African Colony for Freed Slaves", that “freedmen retained the vices and habits of slaves.”[2] He advocated for resettlement of former slaves to the west coast of Africa, where the Society was to found Liberia.

The society was considered controversial and was sometimes met with violence. According to the Encyclopedia Britannica, "The society's antislavery activities frequently met with violent public opposition, with mobs invading meetings, attacking speakers, and burning presses."[3] In the mid-1830s, slavery had become so economically involved in the U.S. that getting rid of it would cause a major blow to the economy.

A convention of abolitionists was called for December 1833 at the Adelphi Building in Philadelphia.[4]:68 The convention had 62 delegates, of which 21 were Quakers. The new American Anti-Slavery Society charged William Lloyd Garrison with writing the organization's new declaration. The document condemns the institution of slavery and accuses slave owners of the sin of being a "man-stealer".[5] It calls for the immediate abolition of slavery without conditions, and is critical of the efforts of the American Colonization Society.[4]:71 At the same time, it declares the group to be pacifist, and the signers agree, if necessary, to die as martyrs.[4]:72 Beginning in January 1834 and ending in August of the same year, the society published the American Anti-Slavery Reporter, a monthly periodical containing professional essays regarding the subject of slavery.[6] In July 1834 the aims of the society appear to have been misrepresented in the prelude to the Farren Riots in New York, which led to attacks on the homes and properties of abolitionists. After the riots were quelled the society issued a public disclaimer:

The undersigned, in behalf of the Executive Committee of the ‘American Anti-Slavery Society’ and of other leading friends of the cause, now absent from the city, beg the attention of their fellow-citizens to the following disclaimer:— 1. We entirely disclaim any desire to promote or encourage intermarriages between white and coloured persons. 2. We disclaim and entirely disapprove the language of a handbill recently circulated in this city, the tendency of which is thought to be to excite resistance to the laws. Our principle is, that even hard laws are to be submitted to by all men, until they can by peaceable means be altered. We disclaim, as we have already done, any intention to dissolve the Union, or to violate the constitution and laws of the country, or to ask of Congress any act transcending their constitutional powers, which the abolition of slavery by Congress in any state would plainly do. July 12, 1834. ARTHUR TAPPAN. JOHN RANKIN[7]

The black clergyman Theodore S. Wright was a significant founding member and served on the executive committee until 1840. A Presbyterian minister, Wright, together with well-known spokesmen such as Tappan and Garrison, agitated for temperance, education, black suffrage, and land reform. According to Wright,

I will say nothing about the inconvenience which I have experienced myself, and which every man of color experiences, though made in the image of God. I will say nothing about the inconvenience of traveling; how we are frowned upon and despised. No matter how we may demean ourselves, we find embarrassments everywhere. But, this prejudice goes farther. It debars men from heaven. While sir, slavery cuts off the colored portion of the community from religious privileges men are made infidels. What, they demand, is your Christianity? How do you regard your brethren? How do you treat them at the Lord's table? Where is your consistency in talking about the heathen, traversing the ocean to circulate the Bible everywhere, while you frown upon them at the door? These things meet us and weigh down our spirits....[8]

Many founding members used a practical approach to slavery, saying economically it did not make sense. Wright used the rhetoric of religion to elicit empathy toward African Americans, and presented slavery as a moral sin.

Frederick Douglass had seen the frustration that Garrison felt towards those who disagreed with him, but wrote many letters to Garrison describing to him the details of the prejudices that slavery had caused. One in particular was directed towards the church. According to Douglass,

In the South I was a member of the Methodist Church. When I came north, I thought one Sunday I would attend communion, at one of the churches of my denomination, in the town I was staying. The white people gathered round the altar, the blacks clustered by the door. After the good minister had served out the bread and wine to one portion of those near him, he said, "These may withdraw, and others come forward"; thus he proceeded till all the white members had been served. Then he drew a long breath, and looking out towards the door, exclaimed, "Come up, colored friends, come up! for you know God is no respecter of persons!" I haven't been there to see the sacraments taken since.[9]

Douglass hoped his letters would remind Garrison why slavery should be abolished. Douglass' reminder did not ease the minds of those against Garrison.

In 1840, the American Anti-Slavery Society was invited to the World Anti-Slavery Convention in London, England, to meet and network with other abolitionist initiatives of the time.[10] Additionally, it served to strengthen each group's commitment to racial equality. At this convention, female delegates were not allowed to participate in the event, but rather observe only, from a gallery. The ruling to exclude female abolitionists caused feminists Lucretia Mott and Elizabeth Cady Stanton to form a group for women’s rights, though it garnered little success initially. Garrison arrived to the convention late and upon hearing of the decision not to allow women to participate, he chose not to enter the Convention, but viewed the proceedings with the women in the gallery.[11] This became the genesis for the women’s suffrage movement.[citation needed]

According to the Encyclopedia of Slavery and Abolition in the United States, Weld held the positions of Manager, 1833–1835, and Corresponding Secretary, 1839–1840.[12] Appletons' Cyclopædia of American Biography states that "in 1836 he...was appointed by the American Anti-slavery Society editor of its books and pamphlets."[13]

The split in the organization

In 1839, the national organization split over basic differences of approach: Garrison and his followers were more radical than other members. They denounced the U.S. Constitution as supportive of slavery, were against established religion, and insisted on sharing organizational responsibility with women.[15] Disagreement regarding the formal involvement of women became one of the principal factors which contributed to the dissolution of the organization.[16] In the western United States, women held more important roles in the American Anti-slavery Society. Attitudes of equalitarianism were more widely accepted and women were viewed as "coworkers, not subordinates."[17] Women not only held leadership positions, but also attended various societies and conventions. In contrast, women's participation in the American Anti-slavery Society became a quite contentious issue in the eastern United States. Women who were publicly passionate about abolition were seen as fanatics. A minority of anti-feminist delegates, who were more moderate on many issues, left the society, forming the American and Foreign Anti-Slavery Society. Wright was among them. They were more conservative, supporting organized religion and traditional forms of governance, and excluding women from leadership.[18] Another issue was whether abolitionists should enter politics as a distinct party.

Along with differing opinions about the role of women, the Liberty Party emerged as a separate anti-slavery organization that broke away from the American Anti-Slavery Society in 1839 in order to pursue an abolitionist agenda through the political process. As a radical, Garrison did not believe it prudent to fight the system from the inside. Because women in the West had a more fluid approach to their political involvement, particularly when it came to Garrison's staunch disagreement with the Constitution, they were drawn to supporting the Liberty Party.[17] The disruption of the American Anti-Slavery Society, however, caused little damage to abolitionism.[citation needed]

At the annual Society meeting in New York, on May 12, 1840, the first item of business was the appointment of a Committee of Business. Eleven people were chosen, with William Garrison the chairman. One of them was a woman, Abby Kelley. "The vote appointing Miss Kelley being doubted, the house was divided, and on a count there appeared 557 in favor and 451 against her election. Lewis Tappan, Amos A. Phelps, and Charles W. Denison successively asked to be excused from serving on the committee, for reasons assigned; having reference to the appointment of Miss Kelly as a member. They were excused."[19]

Because of this schism in national leadership, the bulk of the activity in the 1840s and 1850s was carried on by state and local societies. The antislavery issue entered the mainstream of American politics through the Free Soil Party (1848–54) and subsequently the Republican Party (founded in 1854). The American Anti-Slavery Society was formally dissolved in 1870, after the Civil War and Emancipation.[citation needed]