Ann Street runs parallel to Adelaide Street and is the northern-most street in the Brisbane CBD in Queensland, Australia. The street is named for Anne, Queen of Great Britain, as part of the CBD street naming series of female British royalty.[1] It is a major thoroughfare, linking as a four-lane one-way street the suburb of Fortitude Valley in the northeast with the Riverside Expressway in the southwest; house numbers run the opposite direction.

Parks and buildings along Ann Street include the State Law Building, Central Railway Station, Brisbane City Hall, King George Square, King George Central, and also ANZAC Square and the Shrine of Remembrance (both of which commemorate Australia's and New Zealand's war dead). The now demolished Canberra Hotel (1929–1987) was located on the corner of Ann and Edward Streets.

Each year, on ANZAC Day (25 April), a dawn memorial service is held at the Shrine of Remembrance, with wreaths being laid around the eternal flame in memory of those who died in conflict.[2] There is also a memorial service held each year on Armistice Day (11 November) and wreaths are again laid at the eternal flame. The shrine was dedicated on Armistice Day in 1930.

Ann Street is home to several historic Brisbane churches including St John's Cathedral, Ann Street Church of Christ and St Andrew's Uniting Church. Access to some facilities of All Saints Anglican Church is from Ann Street. 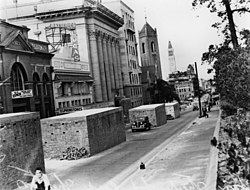 Ann Street has a number of heritage-listed sites, including: