Anker Henrik Jørgensen (13 July 1922 – 20 March 2016) was a Danish politician who served at various times as Prime Minister and Foreign Minister of Denmark. Between 1972 and 1982 he led five cabinets as Prime Minister. Jørgensen was President of the Nordic Council in 1986 and 1991.

He led or represented the Social Democratic Party for well over 30 years. His legacy is ambivalent. Politically, he is considered by many right wing followers to have been largely unsuccessful, having failed to mitigate the impact of the economic crisis of the 1970s and 1980s. Nonetheless, he is generally respected and even loved throughout Denmark for his personal integrity and down-to-earth personality, often exemplified by his refusal to move into the official Prime Minister residence Marienborg, preferring to stay with his wife in their small apartment in a working class area of Copenhagen.[1]

He has been described as not having the image of a strong or visionary leader, but through his down-to-earth and earnest demeanor, he managed to maintain wide support for the Danish welfare state.[2] In 1990, he was chosen to travel to Iraq to negotiate the release of a group of Danish hostages with Saddam Hussein.[3][4]

Anker Henrik Jørgensen was born on 13 July 1922 to Johannes Albert Jørgensen and Maria Jørgensen, who both died of tuberculosis while he was a child.[5] He was brought up by close members of his family. He studied at the Royal Orphanage School [dk], but left after the 7th grade to work at a warehouse. Through his job as a warehouse worker he became active in the Special Workers' Union, from January 2005 merged into Fagligt Fælles Forbund, and in the Social Democratic party.[6]

He served his conscription period in 1943, at the Guard Hussar Regiment Mounted Squadron in Næstved. He was part of the fighting when the barracks was attacked by the Germans during Operation Safari. After being repatriated, Anker Jørgensen then joined the resistance in Copenhagen.[7]

In 1948, he married Ingrid Kvist Pedersen (17 August 1922 – 18 October 1997) whom he remained married to until her death from Motor Neuron Disease. They had 4 children. Throughout this period, he lived in the working-class area of Sydhavnen, an inner city district of Copenhagen. In 2008, 86 years old, he finally left the Sydhavnen apartment, moving to an elderly care center.[7]

He began his political career early, and in 1950 he became a member of a trade union. He led the Danish General Workers' Union between 1968 and 1972. Whilst he was chairman of the union, he was elected to the Parliament of Denmark for the first of many times in 1964.[2] As a representative of unskilled workers, a rivalry developed with the leadership of the skilled workers' unions, such as the Danish Confederation of Trade Unions (LO), and its leader Thomas Nielsen [dk], who referred to Jørgensen as "a complete idiot".[8]

As a member of parliament he was responsible for labor related issues. He located himself on the left wing of the Social Democratic party, speaking out for unskilled workers and the jobless, and criticized the leadership of Parliamentary group leader Per Hækkerup. He also gained attention for his vocal critique of American engagement in Vietnam. Before the 1972 referendum about whether Denmark should join the European Economic Community (ECC), he went against the stated interest of his own labor union, arguing for a yes.[2]

A day after the EEC referendum, Jørgensen succeeded Jens Otto Krag as Prime Minister of Denmark.[6] He held this position for 14 months until the 1973 election when he was succeeded by liberal Poul Hartling.[9]

After just over a year in opposition, he returned as prime minister with a Social Democratic minority government. In 1978, he expanded the government by including the Liberals in a grand coalition government in order to deal with economic issues. This coalition lasted until 23 October 1979,[6] and for a brief period of two months in 1978 he concurrently held the position of foreign minister. During this time, Jørgensen presided over the electoral age referendum.

For the rest of his period in office, he led again led a Social Democrat minority government. Unable to muster support for tax increases and spending cuts, he stepped down as prime minister without calling an election on 10 September 1982, ceding the premiership to the Conservative leader Poul Schlüter. He did, however, remain as leader of the Social Democrats until his resignation in 1987 when he was succeeded by Svend Auken. He remained as a member of parliament until 1994.[6]

Throughout his time in office, he showed strong leadership - guiding Denmark into the EEC and further developing Denmark’s social and welfare systems - but his policies also created a huge state budget deficit, which was compensated for by large state loans, increasing the Danish state debt substantially. Numerous cuts were introduced to counteract this.[10]:314

Nevertheless, a wide range of progressive social reforms were introduced during Jørgensen's time as prime minister. A new Social Assistance Act introduced in 1975 simplified administration, provided new types and (in general) substantially higher benefits, together with new criteria for granting benefits. The New Basic Education Act of June 1975 introduced 9-year general, basic education with optional 10th year and pre-school class, and also established the comprehensive principle for basic education. The National Holiday Act of April 1979 extended the obligatory number of holidays to 30 days. Under the law on entitlement to unemployment benefits of June 1976, the permanently self-employed became entitled to membership in unemployment funds, and consequently to unemployment benefits. The Severance Pay Act of November 1978 introduced pre-retirement remuneration which provided unemployment benefits (for those between the ages of 58 and 66) in cases of voluntary retirement. Under the Job Offer Scheme introduced in June 1980, unemployment benefit entitlement for long-term unemployed persons could not be lost without an offer of a new job. A March 1975 law on regulation of housing conditions improved tenant conditions, while the Work Injury Insurance Act of March 1978 provided equality for widows and widowers.[10][page needed]

He was President of the Nordic Council in 1986 and 1991, and was also head of the Danish delegation to the council during the same terms.

Jørgensen was elected "Dane Of The Year" in 1990.[citation needed] 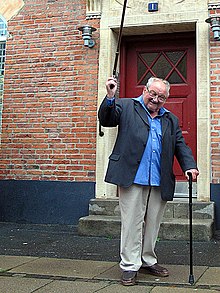