The Anglosphere is a group of English-speaking nations that share common cultural and historical ties to the United Kingdom,[1][2] and which today maintain close political, diplomatic and military cooperation. While the nations included in different sources vary, the Anglosphere is usually not considered to include all countries where English is an official language, so it is not synonymous with anglophone, though the nations that are commonly included were all once part of the British Empire.[3]

The definition is usually taken to include the developed countries Australia, Canada, New Zealand, and the United Kingdom,[4][5][6][7] and often also the United States[8][9][10][11] in a grouping called the core Anglosphere. This term can also encompass the Republic of Ireland[7][12][13] and the Commonwealth Caribbean countries such as The Bahamas, Barbados, and Jamaica.[14] 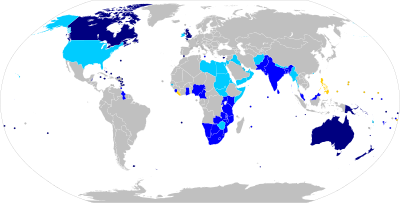 The term Anglosphere was first coined, but not explicitly defined, by the science fiction writer Neal Stephenson in his book The Diamond Age, published in 1995.[15] John Lloyd adopted the term in 2000 and defined it as including English-speaking countries like the United Kingdom, the United States, Canada, Australia, New Zealand, Ireland, South Africa, and the British West Indies.[14] The Merriam-Webster dictionary defines the Anglosphere as "the countries of the world in which the English language and cultural values predominate".[16][a] 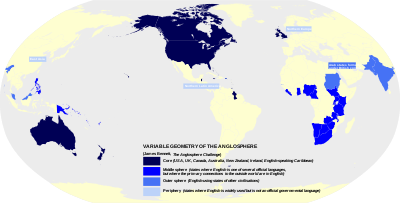 The five main ("core") countries in the Anglosphere (Australia, Canada, New Zealand, the United Kingdom and United States) are all developed countries and maintain a close affinity of cultural, diplomatic and military links with one another. All are aligned under such programs as:[12][15][17][14][18][19]

In terms of political systems, Canada, Australia, New Zealand and the United Kingdom have Elizabeth II as head of state, form part of the Commonwealth of Nations and use of the Westminster parliamentary system of government. Most of the core countries have first-past-the-post electoral systems, but Australia and New Zealand have reformed their systems and there are other systems used in some elections in the UK. As a consequence, most core Anglosphere countries have politics dominated by two major parties.

Public opinion research has found that people in the United States, United Kingdom, Canada, Australia and New Zealand consistently rank each other's countries as their country's most important allies in the world.[20][21][22][23] Relations have traditionally been warm between Anglosphere countries, with bilateral partnerships such as those between Australia and New Zealand, the US and Canada and the US and UK constituting among the most successful partnerships in the world.[24][25][26]

Below is a table comparing the five core countries of the Anglosphere (data are for 2019):

Due to their historic links, the Anglosphere countries share some cultural traits that still persist today. Most countries in the Anglosphere follow the rule of law through common law instead of civil law, and favor democracy with legislative chambers above other political systems.[32] Private property is protected by law or constitution.[33]

Market freedom is high in the United States, the United Kingdom, Australia, and New Zealand, as all four share the Anglo-Saxon economic model – a capitalist model that emerged in the 1970s based on the Chicago school of economics with origins from the 18th century United Kingdom.[34] The shared sense of globalization led cities such as New York, London, Los Angeles, Sydney, and Toronto to have considerable impacts on the financial markets and the global economy.[35] Global culture has been highly influenced by Americanization.[33]

Imperial and US customary measurement systems are often used in Anglosphere countries in addition to or instead of the International System of Units.

The American businessman James C. Bennett,[36] a proponent of the idea that there is something special about the cultural and legal (common law) traditions of English-speaking nations, writes in his 2004 book The Anglosphere Challenge:

Bennett argues that there are two challenges confronting his concept of the Anglosphere. The first is finding ways to cope with rapid technological advancement and the second is the geopolitical challenges created by what he assumes will be an increasing gap between anglophone prosperity and economic struggles elsewhere.[37]

British historian Andrew Roberts claims that the Anglosphere has been central in the First World War, Second World War and Cold War. He goes on to contend that anglophone unity is necessary for the defeat of Islamism.[38]

According to a 2003 profile in The Guardian, historian Robert Conquest favoured a British withdrawal from the European Union in favour of creating "a much looser association of English-speaking nations, known as the 'Anglosphere'".[39][40]

Favourability ratings tend to be overwhelmingly positive between countries within a subset of the Anglosphere known as CANZUK (consisting of Canada, Australia, New Zealand and the United Kingdom),[41][42][43][23] whose members form part of the Commonwealth of Nations and retain Elizabeth II as head of state. In the wake of the United Kingdom's decision to leave the European Union as a result of a referendum held in 2016, there has been mounting political and popular support for a loose free travel and common market area to be formed between the CANZUK countries.[2][44][45]

In 2000, Michael Ignatieff wrote in an exchange with Robert Conquest, published by the New York Review of Books, that the term neglects the evolution of fundamental legal and cultural differences between the US and the UK, and the ways in which UK and European norms have been drawn closer together during Britain's membership in the EU through regulatory harmonisation. Of Conquest's view of the Anglosphere, Ignatieff writes: "He seems to believe that Britain should either withdraw from Europe or refuse all further measures of cooperation, which would jeopardize Europe's real achievements. He wants Britain to throw in its lot with a union of English-speaking peoples, and I believe this to be a romantic illusion".[49]

In 2016, Nick Cohen wrote in an article titled "It's a Eurosceptic fantasy that the 'Anglosphere' wants Brexit" for The Spectator's Coffee House blog: "'Anglosphere' is just the right's PC replacement for what we used to call in blunter times 'the white Commonwealth'."[50][51] He repeated this criticism in another article for The Guardian in 2018.[52] Similar criticism was presented by other critics such as Canadian academic Srđan Vučetić.[53][54][55]

In 2018, amidst the aftermath of the Brexit referendum, two British professors of public policy Michael Kenny and Nick Pearce published a critical scholarly monograph titled Shadows of Empire: The Anglosphere in British Politics (ISBN 978-1509516612). In a series of accompanying opinion pieces, they said that the idea of the Anglosphere was something that could neither help the United Kingdom "find its way in the wider, modern world"[56] nor attract the remaining core English-speaking countries into constructing "new political and economic alliances" with it.[4]