Paul Andrew Richter (born October 28, 1966) is an American actor, voice actor, writer, comedian, and late night talk show announcer. He is best known for his role as the sidekick of Conan O'Brien on each of the host's programs: Late Night, The Tonight Show on NBC, and Conan on TBS. He is also known for his work as the voice of Mort in the Madagascar franchise.

Richter, the third of four children, was born in Grand Rapids, Michigan, to mother Glenda Swanson (née Palmer), a kitchen cabinet designer, and father Laurence R. Richter, who taught Russian at Indiana University for more than 32 years.[1][2][3] Richter was raised in Yorkville, Illinois. He graduated from Yorkville High School in 1984, where he was elected Prom King.[4][5] His parents divorced when he was 4 and his father later came out as gay.[6] Richter is of Swedish and German descent.[7] 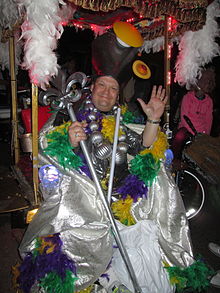 In the late 1980s, Richter attended the University of Illinois at Urbana–Champaign and Columbia College Chicago as a film major. While at Columbia, he learned the basics of comedic acting and writing by starring in numerous student films and videos. After leaving Columbia in 1988, Richter worked as a production assistant on commercial shoots in Chicago. In 1989, he began taking classes at Chicago's Improv Olympic. He went from student to "House Performer" within a year. Richter branched out working with "The Comedy Underground" and the Annoyance Theatre. Richter wrote for the short-lived Jonathan Brandmeier television show.

In the early 1990s, the Annoyance Theatre hit gold when producer Jill Soloway staged The Real Live Brady Bunch with live, word-for-word performances of the '70s sitcom. The show was so popular that it attracted national attention and moved to New York City. Richter was not an original member of the cast but the actor who played "Mike Brady" in the Chicago cast opted not to go to New York. Richter asked Soloway if he could play "Mike" in New York and, since Soloway had not cast a replacement, she agreed.[citation needed]

At the same time The Real Live Brady Bunch was playing in New York, two fellow Annoyance members (Beth Cahill and Melanie Hutsell, who played Marcia and Jan Brady in the "Real Live Brady Bunch" stage show) were hired as cast members on Saturday Night Live. With friends on SNL, Richter was able to get into the after-show parties where he met SNL writer Robert Smigel. Two years later, Smigel hired Richter for a new show he was producing, Late Night with Conan O'Brien. Originally hired as a writer, Richter was upgraded to Conan O'Brien's sidekick just weeks before the show began airing in 1993, after it became clear the two had a strong rapport, something Smigel noticed after sending Richter to join O'Brien on stage during a practice run-through when the production staff was testing lighting angles and sound.[8]

After seven years with the show, Richter departed from Late Night after the show on May 26, 2000. He later said of the decision, "After seven years of being on the show, I got itchy. I have a philosophy that if you enjoy good fortune, rather than sit there and say, 'Oh, that's fine, this amount is good enough for me,' you should try and push it. You should see how much you can stretch your good fortune. And I was curious."[9]

Richter left his post at Late Night in 2000 to pursue a career acting in films and television. His first major venture, Fox's Andy Richter Controls the Universe, was canceled after two mid-season runs. His next Fox sitcom, Quintuplets, lasted one season. His 2007 television series, Andy Barker P.I., was co-written and executive produced by Conan O'Brien. In the series, Richter played an accountant who could not attract clients.[10] After a woman comes to his office thinking he is the former tenant, a private investigator, she asks him to find her husband who she thinks faked his death. Barker decides to pursue this job and becomes a private detective in earnest, and continues to do his accounting job, which seems to pick up as the series goes on. The series played on NBC, with all six episodes in the first season on NBC.com. The series was canceled after very poor ratings despite being named by Entertainment Weekly as one of the Top Ten Shows of 2007.[11]

On February 24, 2009, it was announced that Richter would be joining Conan O'Brien once again as the announcer for The Tonight Show with Conan O'Brien in Los Angeles.[12] Richter frequently appeared in comedy sketches on the show and often commented and interacted with Conan during the opening monologue; he was also part of the show's writing staff. In mid-December 2009, Richter also began joining Conan on the couch during the celebrity interviews, much like he did in his former sidekick role on Late Night. Richter said he enjoyed having a steady paycheck again and not having to deal with production companies while developing television shows. Richter said, "Now I'm so happy to be back and making TV every night, not asking permission from somebody and waiting six months to get their sparklingly clear and cogent notes. And then wait another month for them to get back from Hawaii and say, 'Yes, now we can go make television.' I felt like a plumber who kept going into the building and saying, 'Can we put some pipes together?' and watching my wrenches gather dust."[9]

When Conan O'Brien returned to the air as host of his self-titled TBS show in 2010, Richter followed and resumed his roles as announcer, writer, general sidekick and participant in comedy sketches.

The Three Questions with Andy Richter

Since June 2019, Richter has his own podcast on the Earwolf network.[13]

Richter was considered to be a potential host of the classic Pyramid game show that was being developed for CBS, but was ultimately not picked up by the network.[14] Had the series been picked up, it would not have affected Richter's role on Conan. On May 18, 2011, TBS announced development of a possible new version of Pyramid, again to be hosted by Richter.[15]

In June 2010, Richter hosted the Team Coco Presents the Conan Writers Live comedy special for TBS at the Just for Laughs festival in Chicago. He hosted in place of O'Brien, who was still prohibited from hosting any television program until fall 2010.

In July 2013, Richter signed up to host a game show called Step Up, which was ordered by Fox.[16]

Richter currently holds the record for all-time highest one-day score on Celebrity Jeopardy!, winning $68,000 during a first round game of the 2009–10 season's "Million Dollar Celebrity Invitational". His earnings were donated to the St. Jude Children's Research Hospital.[17]

In April 2002, Richter appeared in the Fox series Malcolm in the Middle. In "Clip Show", he played a psychiatrist giving therapy to Malcolm, Reese, and Dewey.

In October 2005, Richter appeared in the NBC sitcom Will & Grace. In "The Old Man and the Sea", he played an annoying blind date that was teased and misled by Grace Adler, who only dated him to prove she was not a snob.

Richter appeared in Monk as a murderer posing as Adrian Monk's best friend in the episode "Mr Monk Makes a Friend".

Richter appears in the Fox series Arrested Development in the 2006 episode "S.O.B.s." He plays every member of a fictional group of identical Richter quintuplets: Donnie, Chareth, Rocky, Emmett, and himself. He reprises the roles in several episodes of season 4.

From 2006 to 2008, Richter had a recurring role as "Sad Dad" Stan in the TV show The New Adventures of Old Christine.

He also provided the voice of Ben on the animated series The Mighty B!, played Simon Cristini on True Jackson, VP, and reprises the voice of Mort on The Penguins of Madagascar and All Hail King Julien.

In 2008, Richter appeared in composer Marc Shaiman's satirical mini-musical called "Prop 8 — The Musical".[19] The three-minute video was distributed on the internet at FunnyOrDie.com. In addition to Richter, the cast includes Jack Black, John C. Reilly, Craig Robinson, and many other celebrities, directed by Adam Shankman. The video won the 2009 Webby Award category Comedy: Individual Short or Episode,[20] and won a GLAAD media award.[21]

In July 2009, Richter played for the American League as a first baseman in the 2009 Taco Bell All-Star Legends and Celebrity Softball Game. Representing the Los Angeles Angels of Anaheim, Richter hit a home run in the game.[22]

After the end of The Tonight Show with Conan O'Brien, Richter joined O'Brien on his Legally Prohibited from Being Funny on Television Tour, a stage show touring the United States and Canada over the spring of 2010. Richter served in his usual role as announcer/sidekick. Due to performing with O'Brien, Richter was forced to drop out of the Jeopardy! Million Dollar Celebrity Invitational, in which he was a semifinalist. Isaac Mizrahi replaced Richter in the tournament.[23] Richter also made an appearance on the Disney Channel sitcom The Suite Life on Deck as a non-religious hooded brother, Brother Theodore in the episode "Silent Treatment".

Richter was married to comedic actress and writer/author Sarah Thyre, and they have two children, a son born in 2000 and a daughter born in 2005.[24] Thyre was part of the cast of the cult comedy series Strangers with Candy, on which Richter made frequent cameo appearances. Richter and Thyre also appeared together playing Hansel and Gretel in an episode of the Upright Citizens Brigade sketch comedy series on Comedy Central in 1998. On April 13, 2019, Richter announced on his Twitter account that he and Thyre had separated and had begun divorce proceedings.[25]

Richter is a supporter of Planned Parenthood. At a fundraiser in 2016, he referenced abortion services provided in 1992 for Thyre when the couple had split and were each undergoing great personal difficulties. He stated that although they were very sad about the situation, they both knew it was the right decision for them. He also said that he is "eternally grateful" to the organization for allowing them to care for themselves and also for the ability to choose the time to bring children into their lives. The couple had been married 22 years at the time of his statements.[26][27]

Richter is a member of the Sigma Phi Epsilon fraternity. After leaving Late Night with Conan O'Brien, he moved to Los Angeles.

Richter's brother Victor Swanson, a teacher at Glenbard East High School, was a Democratic candidate in the 2018 election in Illinois's 14th district.[28]

On April 15, 2019, Richter joined a host of other writers in firing their agents as part of the WGA's stand against the ATA and of packaging, which they believe to be an unfair practice.[29]