Andorra la Vella (UK: /ænˌdɔːrə lə ˈveɪjə/, US: /- lɑː ˈveɪljə/;[2] Catalan pronunciation: [ənˈdorə lə ˈβeʎə], Spanish: Andorra la Vieja, French: Andorre-la-Vieille) is the capital of the Principality of Andorra. It is located high in the east Pyrenees, between France and Spain. It is also the name of the parish that surrounds the capital.

As of 2015[update], the city has a population of 22,886, and the urban area, which includes Escaldes-Engordany plus satellite villages, has over 40,000 inhabitants.

The principal industry is tourism, although the country also earns foreign income from being a tax haven. Furniture and brandies are local products. Being at an elevation of 1,023 m (3,356 ft), it is the highest capital city in Europe and a popular ski resort. 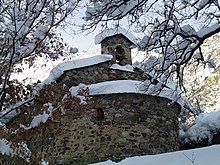 The site of Andorra la Vella has been settled since prior to the Christian era—notably by the Andosin tribe from the late Neolithic. The state is one of the Marca Hispanica created and protected by Charlemagne in the eighth century as a buffer from the Moorish settlers in the Iberian Peninsula.[5]

The settlement of Andorra la Vella has been the principal city of Andorra since 1278 when the French and the Episcopal co-princes agreed to joint suzerainty. Andorra la Vella's old town—the Barri Antic—includes streets and buildings dating from this time. Its most notable building is the Casa de la Vall—constructed in the early sixteenth century—which has been the state's parliamentary house since 1702. Andorra la Vella was, during this period, the capital of a largely isolated and feudal state, which retained its independence due to this principle of co-sovereignty.

Well into the twentieth century, the area around Andorra la Vella remained largely forgotten; indeed the state was not part of the Treaty of Versailles, simply because it was not noticed. After political turmoil in the 1930s and an attempted coup by Boris Skossyreff, an informal democracy developed.

In 1993, the country's first constitution formalised this parliamentary democracy with executive, legislative, and judicial branches located in Andorra la Vella.

During this period, Andorra also developed as a tax haven, resulting in the construction of modern banking offices in Andorra La Vella. The city also developed its skiing facilities, to the extent that Andorra la Vella was Andorra's applicant city for the XXI Olympic Winter Games, the 2010 Winter Olympics. However, Andorra la Vella was not selected by the IOC as a candidate city, following the evaluation report of an IOC commission. It also hosted both the 1991 and 2005 Games of the Small States of Europe.

Andorra la Vella has an oceanic climate (Köppen climate classification: Cfb), with warm days and cool nights in summer, and chilly to cold, snowy winters. The average annual precipitation is 812.3 mm (32 in). Temperatures in the city are lowered by the altitude (1,075 metres) compared with lowland areas. 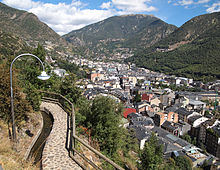 The city's old town is characterized by old stone streets and houses. The central Església de Sant Esteve (Saint Stephen) church is part of the area that guidebooks often label as a picturesque part of the city.[9] This was built in a Romanesque style in the eleventh century. As mentioned earlier, the old town also includes the country's historic parliament building. Probably the oldest building in the city is another church, dating from the ninth century, of Santa Coloma.[10]

Native Andorrans account for only a third (33%) of the population, with the plurality being Spanish (43%), and notable minorities of Portuguese (11%) and French (7%).

The city is the country's cultural centre, with the Government Exhibition Hall acting as a main theatre and museum. The piazza outside the parliament building is also the location of a number of events, and the town hosts a music festival every winter.

Catalan is the official language, although Spanish, Portuguese and French are also spoken. Most of the inhabitants are Roman Catholics, with a high life expectancy of over 80 years.[11] 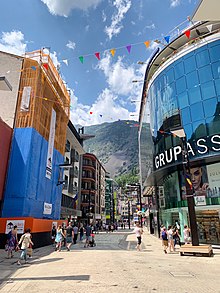 Andorra la Vella is the country's commercial centre. In the country as a whole, 80% of the GDP is derived from the 10 million tourists who visit annually.[12] The city is also the centre for the many banks and businesses that thrive from its tax haven status. The state is not a member of the European Union, but has a customs arrangement with the EU, and uses the euro.

Andorra la Vella has direct access to air transportation with commercial helicopter flights from Andorra la Vella Heliport, located in the city centre. Andorra–La Seu d'Urgell Airport is located 24 kilometres (15 miles) south of the city and since July 2015 operates domestic routes to various airports across Spain.[13] Nearby airports located in Spain and France provide access to international flights with the nearest airports being Perpignan (156 km away) and Lleida (160 km away). The largest nearby airports are Toulouse (Tolosa), Girona and Barcelona.[14]

Andorra la Vella does not have a train station, although there are bus shuttle services linking the city to train stations at L'Hospitalet-près-l'Andorre (France) and Lleida in Spain. There are also shuttle buses from Barcelona, Girona and Reus' airports to Andorra la Vella.[15]

Andorra la Vella is twinned with the following cities:

Andorra la Vella is part of the Union of Ibero-American Capital Cities[18] from 12 October 1982 establishing brotherly relations with the following cities: