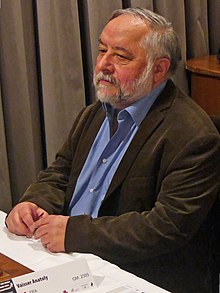 Anatoly Vaisser (born 5 March 1949) is a Soviet-born French chess player. Awarded the title Grandmaster by FIDE in 1985, he is four-time world seniors' champion.

Vaisser was born in Almaty, Kazakhstan (then Soviet Union). In 1982 he won the Russian Chess Championship.[1] FIDE awarded him the titles of International Master (IM) in 1982 and Grandmaster (GM) in 1985.

Vaisser shared first place with Evgeny Sveshnikov at Sochi in 1983, tied for 2nd–3rd with Viswanathan Anand, behind István Csom, at New Delhi in 1987, and took second, behind Vladimir Malaniuk, at Budapest in 1989. He tied for first in the Cappelle-la-Grande Open twice: in 1987 with Anthony Kosten and Jonny Hector, and in 1991 with Matthew Sadler.

Vaisser played twice for France in the Chess Olympiads of: