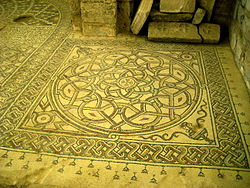 Byzantine mosaic in the Church of Saint Stephen in Umm ar-Rasas.

'Ain Ghazal Venus which dates back to 7250 BC, is among the oldest known large-scale statues of the human form made by a human civilization. It is housed in the Jordan Archaeological Museum

Amman Governorate, officially known as Muhafazat al-Asima (Arabic: محافظة العاصمة‎, English translation: The Capital Governorate), is one of the governorates in Jordan. The governorate's capital is the city of Amman, which is also the country's capital. The administrative center of the governorate as well as all government offices and parliament are located in the Abdali district.

The Amman Governorate has the largest population of the 12 governorates of Jordan. It borders Zarqa Governorate to the north and north east, the governorates of Balqa and Madaba to the west, Karak and Ma'an governorates to the south. It also shares an international border with Saudi Arabia from the east.

The land covered by the Amman Governorate has been inhabited since the prehistoric age, ruins of civilizations as early as 7250 BC have been discovered at 'Ain Ghazal near Amman, the site itself is one of the largest prehistoric settlements in the Middle East.

Amman was the capital and stronghold of the Ammonites, which they called Rabbath Ammon, the Ammonites ruled almost the entire land of the Capital Governorate. After the Romans took control of the region, Amman was renamed as "Philadelphia", and was one of the ten Roman Decapolis cities. Following the Arab Muslim conquests, Philadelphia reclaimed the name Amman. The Byzantine site at Umm ar-Rasas was designated as a World Heritage Site in 2004.

The climate of the Amman Governorate is that of the Eastern Mediterranean climate. However, since Amman is located on a hilly plateau, the average annual precipitation and temperature generally may vary significantly from one location to another, even within the city of Amman. For instance, it may be snowing in the Sweileh district which has an elevation of 1050 m above sea level, but cloudy with no rain in the Amman city center, which has an elevation of 780 m. The Amman Governorate is the third largest governorate in Jordan by area and the largest by population.

The population of districts according to census results:[5]

Nahias of the Amman Governorate

Article 4 of the administrative divisions system of the Jordanian Ministry of Interior states that the Amman Governorate is divided into nine nahias,[dubious – discuss][6] five of these nahias include the districts of Greater Amman Municipality.