The American League of Professional Baseball Clubs, or simply the American League (AL), is one of two leagues that make up Major League Baseball (MLB) in the United States and Canada. It developed from the Western League, a minor league based in the Great Lakes states, which eventually aspired to major league status. It is sometimes called the Junior Circuit because it claimed Major League status for the 1901 season, 25 years after the formation of the National League (the "Senior Circuit"). 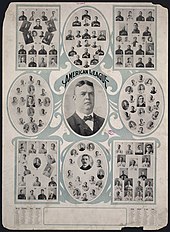 American League President and founder Ban Johnson, in center, surrounded by the portraits of the league's eight teams in 1907.

Originally a minor league known as the Western League which existed 1885 to 1899, with teams in mostly Great Lakes states, the newly organized Western League later developed into a rival major league after the previous American Association (1882–1891) disbanded after ten seasons as a competitor to the older National League of Professional Baseball Clubs (usually known as the National League) which was founded in 1876. In its early history of the late 1880s, the minor Western League struggled until 1894, when Ban Johnson (1864–1931) became the president of the league. Johnson led the Western League into elevation as claiming major league status and soon became the president of the newly renamed American League of Professional Baseball Clubs (also simply called the American League) in 1901. The American League was founded in Milwaukee, Wisconsin at the former Republican Hotel by five Irishmen. A historical marker is at the intersection of North Old World 3rd Street and West Kilbourn Avenue where the hotel once stood.[1]

George Herman ("Babe") Ruth (1895–1948), noted as one of the most prolific hitters in Major League Baseball history, spent the majority of his career in the American League with the Boston Red Sox and the New York Yankees (plus his first year with his hometown team, the Baltimore Orioles of the minor level International League). The American League has one notable difference versus the rival National League, in that in modern times since 1973 it has had the designated hitter rule. Under the rule, a team may use a batter in its lineup who is not in the field defensively, replacing the pitcher in the batting order, compared to the old rule that made it mandatory for the pitcher to bat. In the last two decades, the season schedule has allowed occasional interleague play. In 1969, the AL (and NL) were divided into East and West divisions, with a postseason playoff series for the pennant and the right to play in the World Series.

Until the late 1970s, league umpires working behind home plate wore large, balloon-style chest protectors worn outside the shirt or coat, while their brethren in the National League wore chest protectors inside the shirt or coat. In 1977, new umpires (including Steve Palermo) had to wear the inside chest protector, although those on staff wearing the outside protector could continue to do so. Most umpires made the switch to the inside protector, led by Don Denkinger in 1975 and Jim Evans the next year, although several did not, including Bill Haller, Lou DiMuro, Russ Goetz, George Maloney, Bill Kunkel and Jerry Neudecker, who became the last full-time MLB umpire to use the outside protector in 1985.

In 1994, the league, along with the National League, reorganized again, into three divisions (East, West, and Central) and added a third round to the playoffs in the form of the American League Division Series, with the best second-place team advancing to the playoffs as a wild-card team, in addition to the three divisional champions. In 1998, the newly franchised Tampa Bay Devil Rays joined the league, and the Arizona Diamondbacks joined the National League: i.e., each league each added a fifteenth team. An odd number of teams per league meant that at least one team in each league would have to be idle on any given day, or alternatively that odd team out would have had to play an interleague game against its counterpart in the other league. The initial plan was to have three five-team divisions per league with inter league play year-round—possibly as many as 30 interleague games per team each year.

For various reasons, it soon seemed more practical to have an even number of teams in both leagues. The Milwaukee Brewers agreed to change leagues to become the National League's 16th team, moving from the AL Central to the NL Central. At the same time, the Detroit Tigers were moved from the AL East to the AL Central, making room for the Devil Rays in the East. Even after expansion the American League then continued with 14 teams. This situation changed again, however, in 2013 when the Houston Astros moved from the National League Central division to the American League West. The Astros had been in the NL for 51 years since beginning as an expansion team in 1962, so ever since their move both leagues now consist of 15 teams, a far cry from each of their original 8 for the first half-century of the 20th century.

For the first 96 years, American League teams faced their National League counterparts only in exhibition games or in the World Series. Beginning in 1997, interleague games have been played during the regular season and count in the standings. As part of the agreement instituting interleague play, the designated-hitter rule is used only in games where the American League team is the home team.

There were eight charter teams in 1901, the league's first year as a major league, and the next year the original Milwaukee Brewers moved to St. Louis to become the St. Louis Browns. These franchises constituted the league for 52 seasons, until the Browns moved to Baltimore and took up the name Baltimore Orioles. All eight original franchises remain in the American League, although only four remain in the original cities (Detroit, Chicago, Boston, and Cleveland). The eight original teams and their counterparts in the "Classic Eight" were: