American Academy of Arts and Sciences 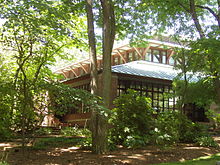 The House of the Academy, Cambridge, Massachusetts

The American Academy of Arts and Sciences (abbreviation: AAAS) is one of the oldest learned societies in the United States. Founded in 1780, the Academy is dedicated to honoring excellence and leadership, working across disciplines and divides, and advancing the common good.

Membership in the academy is achieved through a thorough petition, review, and election process and has been considered a high honor of scholarly and societal merit.[1] The academy was founded during the American Revolution by John Adams, John Hancock, James Bowdoin,[2] and other Founding Fathers of the United States.[3]

Today the Academy is charged with a dual function: to elect to membership the finest minds and most influential leaders, drawn from science, scholarship, business, public affairs, and the arts, from each generation, and to conduct policy studies in response to the needs of society. Major Academy projects now have focused on higher education and research, humanities and cultural studies, scientific and technological advances, politics, population and the environment, and the welfare of children. Dædalus, the Academy's quarterly journal, is widely regarded as one of the world's leading intellectual journals.[4]

David W. Oxtoby began his term as the organization's president in January 2019. A chemist by training, he served as President of Pomona College from 2003 to 2017. He was elected a member of the American Academy in 2012.

The Academy is headquartered in Cambridge, Massachusetts.

The Academy was established by the Massachusetts legislature on May 4, 1780. Its purpose, as described in its charter, is "to cultivate every art and science which may tend to advance the interest, honor, dignity, and happiness of a free, independent, and virtuous people."[6] The sixty-two incorporating fellows represented varying interests and high standing in the political, professional, and commercial sectors of the state. The first class of new members, chosen by the Academy in 1781, included Benjamin Franklin and George Washington as well as several international honorary members. The initial volume of Academy Memoirs appeared in 1785, and the Proceedings followed in 1846. In the 1950s, the Academy launched its journal Daedalus, reflecting its commitment to a broader intellectual and socially-oriented program.[7]

Since the second half of the twentieth century, independent research has become a central focus of the Academy. In the late 1950s, arms control emerged as one of its signature concerns. The Academy also served as the catalyst in establishing the National Humanities Center in North Carolina. In the late 1990s, the Academy developed a new strategic plan, focusing on four major areas: science, technology, and global security; social policy and education; humanities and culture; and education. In 2002, the Academy established a visiting scholars program in association with Harvard University. More than 75 academic institutions from across the country have become Affiliates of the Academy to support this program and other Academy initiatives.[8]

The Academy has sponsored a number of awards and prizes,[9] throughout its history and has offered opportunities for fellowships and visiting scholars at the Academy.[10]

In July 2013 the Boston Globe exposed then president Leslie Berlowitz for falsifying her credentials, faking a doctorate, and consistently mistreating her staff.[11] Berlowitz subsequently resigned.[12][13]

A project of the Academy that equips researchers, policymakers, universities, foundations, museums, libraries, humanities councils, and other public institutions with statistical tools for answering basic questions about primary and secondary humanities education, undergraduate and graduate education in the humanities, the humanities workforce, levels and sources of program funding, public understanding and impact of the humanities, and other areas of concern in the humanities community.[14][15][16][17] It is modeled on the Science and Engineering Indicators, published biennially by the National Science Board as required by Congress.

From the beginning, the membership, nominated and elected by peers, has included not only scientists and scholars, but also writers and artists as well as representatives from the full range of professions and public life. Throughout the Academy's history, 10,000 fellows have been elected, including such notables as John Adams, Thomas Jefferson, John James Audubon, Joseph Henry, Washington Irving, Josiah Willard Gibbs, Augustus Saint-Gaudens, J. Robert Oppenheimer, Willa Cather, T. S. Eliot, Edward R. Murrow, Jonas Salk, Eudora Welty, and Duke Ellington.

Astronomer Maria Mitchell was the first woman elected to the Academy, in 1848.[20]

The current membership encompasses over 5,700 members based across the United States and around the world. Academy members include more than 250 Nobel laureates and more than 60 Pulitzer Prize winners.[21]

The current membership is divided into five classes and twenty-four sections.[22]

Class I – Mathematical and Physical Sciences