It was focused on the Oil, Gas & Chemicals, Mining, Power & Process and Environment & Infrastructure markets, with offices in over 55 countries worldwide. Roughly a third of its turnover came from Europe, half from North America and 12% from the rest of the world.

AMEC was formed from the 1982 amalgamation of Leonard Fairclough & Son (founded 1883) and the William Press Group (founded 1913). In 1988, AMEC went on to acquire Matthew Hall Group.[3] In 1996, AMEC took a 40% stake in Spie Batignolles from Schneider in association with a management buyout.[4] Amec launched the AMEC SPIE brand for engineering services in Europe,[5] a rail construction business AMEC Spie Rail was created, and the remaining construction business was retained as Spie Batignolles.[6] The company announced that it would seek to sell the construction arm of the business Spie Batignolles, and entered negotiations to secure a management buyout of that division;[6][7] the management buyout of the construction arm of Spie was completed in September 2003 with the aid of Barclays Private Equity Finance[8] and later that year Amec took full control of the remaining parts of Spie.[9]

Acquisitions in the new millennium included Ogden Environmental & Energy Services[10] and AGRA Monenco Inc., a North American engineering and services company, both in 2000[11] as well as the U.S. operations and equipment of Lauren Kamtech in 2003.[12] Then in 2004, AMEC was awarded a contract to assist in the reconstruction effort in Iraq, as part of a joint venture with Fluor Corp.[13]

In 2005, AMEC acquired UK-based NNC, a large nuclear consulting company and its subsidiaries, including Ontario-based Nuclear Safety Solutions ('NSS'), the nuclear safety division of OPG, which was spun off when OPG was privatised.[14] The European engineering business, AMEC SPIE, was sold to PAI Partners for €1,040 million in 2006[15][16][17][18] and the European rail business joint venture Amec Spie Rail systems was sold for an estimated £200million in 2007, to Colas Group.[19][20][21]

In 2015, the company tried to change its focus to deal with the decline in oil process.[36]

The acquisition of Foster Wheeler coincided with a downturn in revenues from the oil and gas sectors, its primary clients, leading to crippling debt.[37] The resultant financial difficulties led to the company's chief executive Samir Brikho stepping down in January 2016.[38][39] 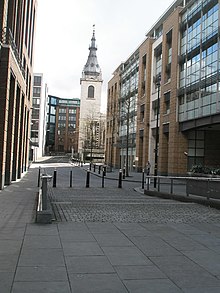 Head office of Amec Foster Wheeler in London (on the right)