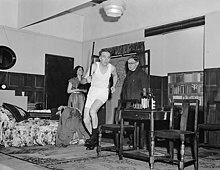 Gobowen Amateur Dramatic Society's presentation of See How They Run, 1954

Amateur theatre, also known as amateur dramatics, is theatre performed by amateur actors and singers. Amateur theatre groups may stage plays, revues, musicals, light opera, pantomime or variety shows, and do so for the social activity as well as the artistic side. Productions may take place in venues ranging from the open air, community centres or schools to independent or major professional theatres and can be simple light entertainment or demanding drama.

Amateur theatre is distinct from the professional or community theatre simply in that participants are not paid, although this is not always the case, even though the productions staged may be commercial ventures, either to fund further productions, to benefit the community, or for charity.

Amateur actors are not typically members of actors' unions, as these organisations exist to protect the professional industry and discourage their members from working with companies which are not signatories to union contracts.[1]

Opinions vary on how to define "amateur" in relation to theatre. Technically speaking, an "amateur" is anyone who does not accept, or is not offered, money for their services. One interpretation of this is: "One lacking the skill of a professional, as in an art". Another is: "A person who engages in an art, science, study, or athletic activity as a pastime rather than as a profession".[2]

An amateur actor is unlikely to be a member of an actors' union as most countries' trades unions have strict policies in place. For example, in Britain Equity "are pleased to welcome into Equity anyone who is currently working professionally in the field of entertainment."[3] In the USA the Actors' Equity Association[4] serves a similar purpose: to protect the professional industry and its artists.

While the majority of professional stage performers have developed their skills and studied their craft at recognised training institutions such as the Royal Academy of Dramatic Art (London), Juilliard School (New York) or National Institute of Dramatic Art (Sydney), amateurs are not usually professionally trained.

Amateur theatre (amateur dramatics) can be defined as "theatre performances in which the people involved are not paid but take part for their own enjoyment".[5] Locally organised theatrical events provide a source of entertainment for the community, and can be a fun and exciting hobby, with strong bonds of friendship formed through participation. Many amateur theatre groups reject the "amateur" label and its negative association with "amateurish", preferring to style themselves "dramatic societies", "theatre groups" or just "players".

whether we like it or not, and whatever its original root meaning – the word 'amateur' now has a negative, often pejorative significance in modern English usage when it applies to theatre and art. In theatre specifically, 'amateurism' is regularly used to imply muddled and botched work, low standards, lack of preparation, and so on; indeed, some amateur theatre companies in the UK, being aware of this, are even following the American usage by re-branding themselves as 'community' groups.[6]

François Cellier and Cunningham Bridgeman wrote, in 1914, that prior to the late 19th century, amateur actors were treated with contempt by professionals. After the formation of amateur Gilbert and Sullivan companies licensed to perform the Savoy operas, professionals recognised that the amateur societies "support the culture of music and the drama. They are now accepted as useful training schools for the legitimate stage, and from the volunteer ranks have sprung many present-day favourites."[7] Amateurs continue to argue that they perform a community service,[8] while even in the 1960s, there was still, "particularly in professional quarters, a deep-rooted suspicion that amateur theatre is really an institution that exists in order to give significance to 'amateur dramatics' a frivolous kind of amusement with no pretention to art" or "as a base for starring the most popular and politically astute members"[9] Nevertheless, many professional actors established their craft on the amateur stage.[10]

After 1988, in the UK, membership in the actors' Equity union can no longer be made compulsory, and professional performers may perform with any amateur company. Some amateur companies engage professional directors. These changes are blurring the distinction between amateur and professional theatre.[10][11] Amateur theatre is sometimes referred to in the UK as "non-commercial theatre".[10] In recent times the distinction between 'amateur' and 'professional' has been blurred further, with professional companies encouraging community involvement in their productions through using local amateur companies.[citation needed] An example of this is the Royal Shakespeare Company's 2016 tour of A Midsummer Night's Dream: A Play for the Nation: in each of the 14 cities visited by the touring show, the company recruited local members of amateur companies to play the parts of Nick Bottom and the other Mechanicals.[12]

People throughout Great Britain participate in amateur theatre as performers, crew or audience members and many children first experience live theatre during local amateur performances of the annual Christmas pantomime. Amateur theatre can sometimes be a springboard for the development of new performing talent[13] with a number of professional actors having their first stage experiences in amateur theatre such as Liam Neeson (Slemish Players in Ballymena), James Nesbitt (Ulster Youth Theatre)[14] and Nathan Wright (in Dudley).[10]

A survey carried in 2002 by the major UK umbrella organisation for amateur theatre, National Operatic and Dramatic Association ("NODA"), noted that "Public support in the UK for amateur theatre is patchy", but found that the annual turnover of affiliated groups was £34 million from 25,760 performances with 437,800 participants, 29% of whom were under 21; attendances were 7,315,840.[13]

An earlier, limited survey in England in 1991 revealed that only 19% of amateur drama groups were affiliated to a national "umbrella" organisation,[15] suggesting that NODA's later survey may not reflect the true level of grass roots community involvement with amateur theatre.

Of the major bodies representing amateur theatre nationally, the National Operatic and Dramatic Association ("NODA") was founded in 1899 and in 2005 reported a membership of over 2,400 amateur theatre companies and 3,000 individuals staging musicals, operas, plays, concerts and pantomimes in venues ranging from professional theatres to village halls.[13]

The Little Theatre Guild of Great Britain ("LTG") represents over 100 independent amateur theatres with auditoria from 64 to 450 seats,[17] while the National Drama Festivals Association ("NDFA") caters for some 500 groups participating in around 100 local drama festivals. (See "Major Festivals" below)

There are regional bodies throughout the UK.

England
The All-England Theatre Festival ("AETF") caters for amateur theatre groups which participate in local drama festivals, and is also concerned with a similar number of festivals of one-act and full-length plays, involving a similar number of theatre companies. The AETF hold All-England Finals, the winners of which go forward to represent England at the National Festival of Community Theatre along with representatives from Northern Ireland, Scotland and Wales. Please see "Major Festivals" below.

As of January 2005, the Arts Council England was not providing any funding towards infrastructure organisations for amateur and community theatre, other than youth theatre through its support for the National Association of Youth Theatre.[13] Other associations include Avon Association of Drama, Woking Drama Association, Somerset Fellowship of Drama, Spalding Amateur Dramatic And Operatic Society and the Greater Manchester Drama Federation ("GMDF") which holds annual festivals with 60+ active members.

Scotland
The Scottish Community Drama Association ("SCDA"), founded in 1926, works to promote all aspects of community drama in Scotland. SCDA received funding of £50,000 from the Scottish Arts Council in 2004-05.[13]

Wales
The Drama Association of Wales ("DAW"), founded in 1934, exists to increase opportunities for people in the community to be creatively involved in drama. This is supported through the provision of training, new writing initiatives and access to an extensive specialist lending library containing plays, playsets and technical theatre books.

Northern Ireland
The Association of Ulster Drama Festivals ("AUDF") and is made up of three representatives from each member festival, as well as the Churches Drama League and Young Farmer Clubs. Founded in 1949 it aims "to foster and encourage amateur drama through the holding of Festivals of Drama, the fostering of relations and co-operation between Ulster Drama Festivals, and the fostering of relations with similar organisations in Northern Ireland and other regions ..."[18]

There are many local festivals of amateur theatre within the UK and two major national and one international festival:

There a number of UK wide competitions that are organised by different bodies: 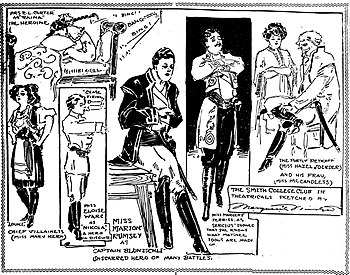 Actors of the Smith College Club of St. Louis are sketched rehearsing for an all-woman amateur benefit performance of George Bernard Shaw's "Arms and the Man" in December 1908. No men were allowed in the rehearsals or at the performance. The illustration is by Marguerite Martyn of the St. Louis Post-Dispatch.[22]

The American Association of Community Theatre is the major umbrella association for community theatre in the United States. According to their website: "AACT is a nonprofit corporation that serves both individuals and organizations by providing expertise, assistance and support so that community theatres can provide the best possible theatrical experience for participants and audience alike."[26] Among other activities the AACT sponsors a national theatre festival in odd-numbered years.[27]

The independent Theatre Association is the peak body for amateur or Community drama in Western Australia.[28] Australian amateur theatre is dependent on volunteer effort and very few amateur theatres pay salaries, although some employ cleaners. Amateur acting experience is highly sought as an entry point for aspiring professionals.[citation needed] The annual Finley awards celebrate the achievements of theatres in several categories.

A Workers' Education Dramatic Society and student counterpart was active in Brisbane between 1930 and 1962.[29]

A satirical view of amateur performers appears in the movie Hot Fuzz, where Simon Pegg and Nick Frost sit through a tedious amateur version of Romeo and Juliet closely modelled on the Baz Luhrmann film version starring Leonardo DiCaprio and Claire Danes. Later the leads are murdered for being what the killer calls "appalling actors".

In the movie Along Came Polly, Philip Seymour Hoffman plays an egotistical actor who wants to play every role in an amateur version of Jesus Christ Superstar. When the other actors refuse he calls them "a bunch of amateurs", to which Ben Stiller replies: "Isn't that the point of amateur theatre"?

The mockumentary Waiting for Guffman depicts a local amateur theatre group staging a performance for their city's sesquicentennial with the prospect of a theatrical professional attending the performance.

Alan Ayckbourn's play A Chorus of Disapproval is set in an amateur operatic society.