Altiero Spinelli (31 August 1907 – 23 May 1986) was an Italian politician, political theorist and European federalist, referred to as one of the founding fathers of the European Union.

A communist and militant anti-fascist in his youth, he spent 10 years imprisoned by the Fascist regime. Having grown disillusioned with Stalinism, he broke with the Italian Communist Party in 1937. Interned in Ventotene during World War II he, along with fellow democratic socialists, drafted the Manifesto for a free and united Europe (most commonly known as the Ventotene Manifesto) in 1941, considered a precursor of the european integration process.

Spinelli was born in Rome, and joined the Italian Communist Party (PCI) at an early age to oppose the regime of Benito Mussolini's National Fascist Party. Following his entry into radical journalism, he was arrested in 1927 and spent ten years in prison and a further six in confinement. During the war he was interned on the island of Ventotene (in Lazio) along with some eight hundred other political opponents of the regime.[1] In 1937 he was expelled from the Italian Communist Party, as opposing Stalinism, under accusation of undermining the Bolshevik ideology and supporting Trotskyism.[2] 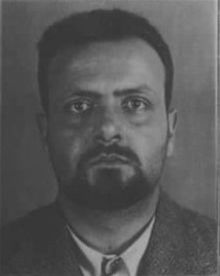 In June 1941, well before the outcome of the war was safely predictable, Spinelli and fellow prisoner Ernesto Rossi completed the Ventotene Manifesto, eventually entitled Per un’Europa libera e unita ("For a Free and United Europe. A Draft Manifesto"), which argued that, if the fight against the fascist powers was successful, it would be in vain if it merely led to the re-establishment of the old European system of sovereign nation-states in shifting alliances. This would inevitably lead to war again. The document called for the establishment of a European federation by the democratic powers after the war. Because of a need for secrecy and a lack of proper materials at the time, the Manifesto was written on cigarette papers, concealed in the false bottom of a tin box and smuggled to the mainland by Ursula Hirschmann. It was then circulated through the Italian Resistance, and was later adopted as the programme of the Movimento Federalista Europeo, which Spinelli, Colorni and some 20 others established, as soon as they were able to leave their internment camp. The founding meeting was held in clandestinity in Milan on the 27/28 August 1943.

The Manifesto was widely circulated in other resistance movements towards the end of the war. Resistance leaders from several countries met clandestinely in Geneva in 1944, a meeting attended by Spinelli.

The Manifesto put forward proposals for creating a European federation of states, the primary aim of which was to tie European countries so closely together that they would no longer be able to go to war with one another. As in many European left-wing political circles, this sort of move towards federalist ideas was argued as a reaction to the destructive excesses of nationalism. The ideological underpinnings for a united Europe can thus be traced to hostility to nationalism: "If a post war order is established in which each State retains its complete national sovereignty, the basis for a Third World War would still exist even after the Nazi attempt to establish the domination of the German race in Europe has been frustrated" (founding meeting of the MFE).

After the war, Spinelli, leading the federalist MFE, played a vanguard role in the early episodes of European integration, criticising the small steps approach and the dominance of intergovernmentalism, feeling even that the chance to unite Europe had been missed as sovereign states were re-established without any common bond other than the functionalist OEEC and the largely symbolic Council of Europe. Even the European Coal and Steel Community (ECSC) was felt to be too sectoral. The MFE believed governments alone would never relinquish their national power without popular pressure. They advocated a European constituent assembly to draft a European Constitution.

This approach eventually had a response from governments when they set up the "ad hoc assembly" of 1952–3. It was Spinelli who persuaded Italian Prime Minister Alcide De Gasperi to insist in the negotiation of the European Defence Community (EDC) treaty on a provision for a parliamentary assembly to draw up plans for placing the EDC, the ECSC and any other development within a global constitutional framework to "replace the present provisional organization" with "a subsequent federal or confederal structure based on the principle of the separation of powers and having, in particular, a two-chamber system of representation". The Assembly was invited to submit its proposals within six months of its constitutive meeting following the entry into force of the EDC treaty. In fact, the Foreign Ministers, meeting three months after the signature of the EDC treaty, invited the ECSC Assembly immediately to draft a "treaty constituting a European Political Authority" without waiting for ratification of the EDC Treaty.

Spinelli played a significant role in advising the drafting of the Assembly's proposal for a European "Statute". However, the failure of France to ratify the EDC treaty meant it was all to no immediate avail. Some of its ideas, however, were taken up in subsequent events.

Following the crisis of the failure of the EDC and the "re-launch" under the Paul-Henri Spaak committee, which led to the 1958 EEC Treaty, Spinelli, recognising that the EEC institutions were the only real existing form of European integration, but still considering that they were insufficient and that they lacked a democratic legitimacy, embarked on a "long march through the institutions". In 1970, he was nominated by the Italian government to be a member of the European Commission[3] from 1970 to 1976, taking responsibility for industrial policy to develop European policies in a new field.

Spinelli decided to run in the first direct elections to the European Parliament in 1979. He did so as an independent candidate on the list of the Italian Communist Party, which by then had become a Eurocommunist party and was keen to have prominent independent figures to stand on its list of candidates. He was elected and used the position to urge the first elected parliament to use its democratic legitimacy to propose a radical reform of the European Community, to transform it into a democratic European state.

To this end, he began to gather like-minded Members of the European Parliament around him, taking care to involve Members from different political groups. An initial meeting at the "Crocodile" restaurant in Strasbourg set up the "Crocodile Club", which, once it was of sufficient size, tabled a motion for Parliament to set up a special committee (eventually established in January 1982 as the Committee on Institutional Affairs, with Spinelli as General Rapporteur) to draft a proposal for a new treaty on union.

The idea was that the European Parliament should act as a constituent assembly, although Spinelli was prepared to make compromises on the way to secure broad majorities behind the process. On 14 February 1984, the European Parliament adopted his report and approved the Draft Treaty Establishing the European Union. The decision was taken with 237 votes for and 31 against (43 abstentions).[4]

Spinelli's project was soon buried by the governments of the member states. However, it provided an impetus for the negotiations which led to Single European Act of 1986 and the Maastricht Treaty of 1992. This happened with the help of several National parliaments, which adopted resolutions approving the Draft Treaty, and of French President François Mitterrand who, following a meeting with Spinelli, came to the European Parliament to speak in favour of its approach, thereby reversing France's policy (since Charles De Gaulle) of hostility to anything but an intergovernmental approach to Europe. This momentum was enough to obtain the support of a majority of national governments to trigger the treaty revision procedure.

He married Ursula Hirschmann, a German anti-fascist activist and fellow advocate of European federalism in 1945 and they had three daughters: Diana Spinelli, Barbara Spinelli and Sara Spinelli. Ursula already had another three daughters (Silvia, Renata and Eva) from her first husband Eugenio Colorni, who was killed by the Nazis in Rome in 1944. Altiero's stepdaughter Eva Colorni was married to Indian economist Amartya Sen.

On 15 September 2010 under the name Spinelli Group an initiative was founded to reinvigorate the strive for federalisation of the European Union (EU). Prominent supporters of the group are: Jacques Delors, Joschka Fischer, Daniel Cohn-Bendit, Andrew Duff, Elmar Brok.