Dominance (ethology) Gorilla Klaus Immelmann
For other uses, see Alpha Wolf (disambiguation).
Individual in the community with the highest rank 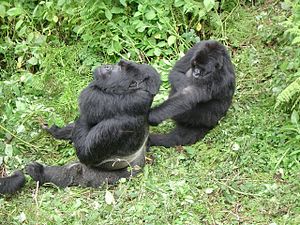 In studies of social animals, the highest ranking individual is sometimes designated as the alpha. Males, females, or both, can be alphas, depending on the species. Where one male and one female fulfill this role together, they are sometimes referred to as the alpha pair. Other animals in the same social group may exhibit deference or other species-specific subordinate behavior towards the alpha or alphas.

Alphas may achieve their status by superior physical strength and aggression, or through social efforts and building alliances within the group,[1] or more often, simply by breeding and being the parent of all in their pack.[2] The individual with alpha status sometimes changes, often through a fight between the dominant and a subordinate animal. These fights are often to the death, depending on the animal.[3]

Social animals in a hierarchical community are sometimes assigned ranks in ethology studies.

Beta animals often act as second-in-command to the reigning alpha or alphas and will act as new alpha animals if an alpha dies or is otherwise no longer considered an alpha. In some species of birds, males pair up in twos when courting, the beta male aiding the alpha male. It has been found that the social context of the animals has a significant impact on courtship behavior and the overall reproductive success of that animal.[4]

Omega has a conflicted meaning. As an antonym it is used to refer to the lowest caste of a hierarchical society. Following the theories that omega animals are subordinate to all others in the community, and are expected by others in the group to remain submissive to everyone. Omega animals may also be used as communal scapegoats or outlets for frustration, or given the lowest priority when distributing food.[5] These same researchers also compared the omega wolf to a "court jester," being first to initiate play, and while submissive, well liked and not outcast. Interestingly, in the pack under study, the omega named Lakota was in fact the largest and strongest of the wolves.[6]

Alternately, and in popular use, is the omega as the romanticized "Lone Wolf" or the omega wolf as discussed by David Mech.[7] Per this pro-omega type, the omega is not the submissive "second place" as a beta is. Rather, they are equally dominant yet in an independent way. Instead of leading a group like an alpha or collaborating like a beta, this omega type is self-reliant, and less collaborative – but also less focused on leading or commanding groups.

Researcher M.W. Foster investigated primates and found that the leaders were more likely to be those who did more for those around them instead of being determined by strength.[8]

Common chimpanzees use strength, intelligence, and political alliances to establish and maintain alpha position.[9] There have been rare cases where a group has killed the alpha male.[10][11] Common chimpanzees show deference to the alpha of the community by ritualized postures and gestures such as presenting their back, crouching, bowing, or bobbing.[12][verification needed] Chimpanzees lower in rank than the alpha male will offer their hand while grunting to the alpha male as a sign of submission.[13] Bonobo society on the other hand is governed by alpha females. Males will associate with females for rank acquisition because females dominate the social environment. If a male is to achieve alpha status in a bonobo group, he must be accepted by the alpha female.[14] Female bonobos use homosexual sex to increase social status. High-ranking females rarely interact sexually with other females, but low-ranking females interact sexually with all females.[15]

Gorillas use intimidation to establish and maintain alpha position. A study conducted regarding the reproductive behavior of male mountain gorillas (Gorilla beringei beringei) found further evidence that dominant males are favored to father offspring, even when there is a greater number of males in a notably enlarged group size. The study also concluded that mating access dropped off less steeply with status; alpha, beta, and gamma showing more similar mating success, compared to what had been previously thought.[16]

A study on the association of alpha males and females during the non-breeding season in wild Capuchin monkeys (Cebus apella nigritus) examined whether alpha males are the preferred mate for females and, secondly, whether female-alpha status and relationship to the alpha-male can be explained through the individual characteristics and or social network of the female.[17] The results indicated that alpha male Capuchin are the preferred mate for adult females. However, only the alpha females had strong interactions with the alpha males by virtue of a dominance hierarchy among the females in which only the most dominant and strong females were able to interact with the alpha male.[17]

Adult male mandrills with alpha status display vivid colouration on their skin, while those with beta status are more dull in colour. Both types of males engage in mating, but only the dominant alpha males have the ability to produce offspring. Male mandrills sometimes fight for breeding rights which results in dominance. Though conflicts are rare, they can be deadly. Gaining dominance, that is becoming the alpha male, results in an "increased testicular volume, reddening of sexual skin on the face and genitalia, and heightened secretion of the sternal cutaneous gland".[18] When a male loses dominance or its alpha status, the reverse happens, although the blue ridges remain brightened. There is also a fall in its reproductive success. This effect is gradual and takes place over a few years.[19][20][21] When beta males mate-guard a female, the competition between them allows the alpha males to have a greater chance of producing offspring,[22] since betas outnumber alphas 21 to 1.

In the past, the prevailing view on gray wolf packs was that they consisted of individuals vying with each other for dominance, with dominant gray wolves being referred to as the "alpha" male and female, and the subordinates as "beta" and "omega" wolves. This terminology was first used in 1947 by Rudolf Schenkel of the University of Basel, who based his findings on researching the behavior of captive gray wolves.[23] This view on gray wolf pack dynamics was later popularized by the researcher L. David Mech in his 1970 book The Wolf. He later found additional evidence that the concept of an Alpha male may have been an interpretation of incomplete data and formally disavowed this terminology in 1999. He explained that it was heavily based on the behavior of captive packs consisting of unrelated individuals, an error reflecting the once prevailing view that wild pack formation occurred in winter among independent gray wolves. Later research on wild gray wolves revealed that the pack is usually a family consisting of a breeding pair and their offspring of the previous 1–3 years. In the article, Mech wrote that the use of the term "alpha" to describe the breeding pair adds no additional information, and is "no more appropriate than referring to a human parent or a doe deer as an alpha." He further notes the terminology falsely implies a "force-based dominance hierarchy." In 13 years of summer observations of wild wolves, he witnessed no dominance contests between them.[24]