Almería (UK: /ˌælməˈriːə/,[2] also US: /ˌɑːl-/,[3][4] Spanish: [almeˈɾi.a]) is a city in Andalusia, Spain, located in the southeast of Spain on the Mediterranean Sea, and is the capital of the province of the same name. It was Abd al-Rahman III who founded the Alcazaba (the Citadel), which gave this city its name: al-Mariyyah (المريّة, "the Watchtower").[5] In the 10th and 11th centuries, it formed part of the Caliphate of Córdoba, and grew wealthy on trade and the textile industry, especially silk. It suffered many sieges and fell under Christian domination in 1489. In 1522, Almería was devastated by an earthquake and rebuilding and recovery did not really get underway until the 19th century. During the Spanish Civil War, the city was shelled by the German Navy, and fell to Franco in 1939. It has since rebuilt its economy around vegetable production, with 100,000 acres of greenhouses, supplying much of Europe.[citation needed]

In the first century, Christian documents report that there was a town named Urci, possibly near the current site of Almería, in the Hispania of the Roman Empire. However, this is disputed, as there are several possible sites of the town. However, missionary Saint Indaletius is said to have evangelized Urci and become its first bishop, and is officially the patron saint of Almería.[6]

Later, the city was refounded by Calipha Abd-ar-Rahman III of Córdoba in 955 AD. It was to be a principal harbour in his extensive domain to strengthen his Mediterranean defences. 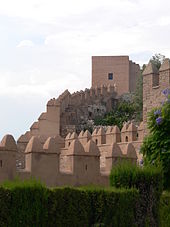 Its Moorish castle, the Alcazaba of Almería, is the second largest among the Muslim fortresses of Andalusia, after the Alhambra.

The ancient walls of Jayrán

In this period, the port city of Almería reached its historical peak. After the fragmentation of the Caliphate of Córdoba in 1031, Almería continued to be ruled by powerful local Muslim Taifa emirs like Jairan, the first independent Emir of Almería and Cartagena, and Almotacin, the poet emir. Both Jairan and Almotacin were fearless warriors, but also sophisticated patrons of the arts. A silk industry, based upon plantings of mulberry trees in the hot, dry landscape of the province, supported Almería in the 11th century and made its strategic harbour an even more valuable asset.

The statue of San Cristóbal

Contested by the emirs of Granada and Valencia, Almería experienced many sieges, including one especially fierce siege when Christians, called to the Second Crusade by Pope Eugene III, were also encouraged to counter the Muslim forces on a more familiar coast. On that occasion Alfonso VII, starting on 11 July 1147, at the head of mixed armies of Catalans, Genoese, Pisans and Franks, led a crusade against the rich city, and Almería was captured on 17 October 1147.[7]

Within a decade, however, Almería had passed to the control of the Muslim Almohad emirs,[7] and not until the late 15th century did it became again a Christian city when it accepted the sovereignty the Catholic Monarchs, Fernando and Isabel, on December 26, 1489.

The 16th century was for Almería a century of natural and human catastrophes; for there were at least four earthquakes, of which the one in 1522 was especially violent, devastating the city. The people who had remained Muslim were expelled from Almería after the War of Las Alpujarras in 1568 and scattered across Spain. Landings and attacks by Berber pirates were also frequent in the 16th century, and continued until the early 18th century. At that time, huge iron mines were discovered and French and British companies set up business in the area, bringing renewed prosperity and returning Almería to a position of relative importance within Spain.[citation needed]

During the Spanish Civil War the city was shelled by the German Navy, with news reaching the London and Parisian press about the "criminal bombardment of Almería by German planes".[8] Almería surrendered in 1939, being the last Andalusian main city to fall to Francoist forces.

In the second half of the 20th century, Almería witnessed spectacular economic growth due to tourism and intensive agriculture, with crops grown year-round in massive invernaderos – plastic-covered "greenhouses" – for intensive vegetable production.

After Franco's death and popular approval of the new Spanish Constitution, the people of southern Spain were called on to approve an autonomous status for Andalusia region in a referendum. The referendum were approved with 118,186 votes for and 11,092 votes against in Almería province,[9] which represented 42% of all registered voters.[10] 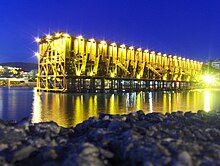 Almería has the highest proportion of Muslim population of any Spanish city at 11-20%, depending on source.[failed verification][11] 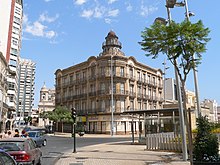 House of the Butterflies

Famous natives of Almería include Nicolás Salmerón y Alonso, who in 1873 was the third president of the First Spanish Republic, as well as several musicians, including the composer José Padilla Sánchez, whose music was declared of "universal interest" by Unesco in 1989, the popular folk singer Manolo Escobar, renowned Flamenco guitar player José Tomás "Tomatito" and Grammy Award winner David Bisbal; the champion motorcyclist Antonio Maeso moved to Almería as a child.

The Irish folk-rock group The Pogues paid tribute to Almería in "Fiesta," a song on the band's third album, If I Should Fall from Grace with God.

In 1989, English electronic band Depeche Mode filmed the video for their song "Personal Jesus" in Almería.

The tourism increased and hotels were all occupied from January to February during the filming of the sixth season of the TV series Game of Thrones.[12] 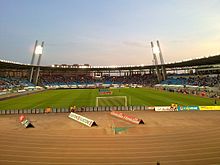 The economy of Almería is mostly based on agriculture, which is located mainly in the western part of the region. Numerous greenhouses mostly constructed with plasticulture produce tonnes of fruit and vegetables, more than 70% of their product being exported to the rest of Europe. These greenhouses are controversial, with allegations of cheap labour and harsh conditions. The plastic often ends up the sea, killing marine life.[citation needed]

By land, Almería can be reached by the A-7 Mediterranean Highway, which connects the Mediterranean area with the Spanish A-92 that unites it with the rest of Andalusia. Almería is served by Renfe Operadora with direct rail services to Granada, and Madrid using a branch off the Alcázar de San Juan–Cádiz railway; the Linares Baeza–Almería railway. In the future, high-speed rail AVE services will link Almería to Madrid via Murcia. The central railway station has been closed for several months and it is not known exactly when it will re-open. Passengers currently start their journey by being bussed a few kilometres to Huercal de Almeria station.

By sea, the port of Almería has connections to Melilla, Algeria, Morocco, and tourist cruises in the Mediterranean. It also has a marina with moorings for pleasure boats. Currently the port of Almería is being expanded with new docks and transformed into a container port to take large-scale international shipping and thereby increase its freight traffic. It normally connects with the following destinations:

By air, Almería is served by Almería Airport, the fourth largest in Andalusia[citation needed]. The winter timetable includes flights to Madrid, Barcelona, Melilla, London, and Seville, with international connections to Manchester, Birmingham, Brussels, Dublin and Swiss, German and other EU airports being added during the summer. 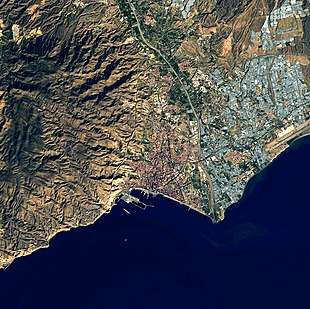 Due to its arid landscape, numerous spaghetti westerns were filmed in Almería and some of the sets are still remain as a tourist attraction.[13][14] These sets are located in the desert of Tabernas. The town and region were also used by David Lean in Lawrence of Arabia (1962), John Milius in The Wind and the Lion (1975) and others.

With a yearly precipitation of just 200 mm (7.9 in) and with only 26 days of precipitation, Almería is the only city in Europe with a true hot desert climate (BWh) according to the Köppen climate classification, bordering a hot semi-arid climate (BSh). Almería is the only European city with this type of climate, also being one of the driest zones on both shores of the Mediterranean coast. Almería has an annual temperature of 19.1 °C (66.4 °F)

The BWh climate is present in the city of Almería, in nearby areas of Almería province (such as the Cabo de Gata-Níjar Natural Park, the Andarax/Almanzora river valleys), the only region in Europe to have this climate (this excludes the Canary Islands, which are also part of Spain and are geographically on the continent of Africa, which have a hot desert climate on most of the islands, specifically on the islands of Fuerteventura and Lanzarote in the Province of Las Palmas).[15] With an average annual temperature above 19.1 °C (66.4 °F), it also qualifies as the 2nd warmest city in continental Europe, after Seville, also in Andalusia, Spain. This arid climatic region spreads along the coastline around Almería to Torrevieja, in the northeast.[16] The nearby Faro del Cabo in the Cabo de Gata-Níjar Natural Park, has the lowest annual precipitation on the European continent (156mm).[17]

Almeria also experiences the warmest winters of any city on the European continent with a population over 100,000, having as well hot and dry summers, being precipitation rare between June and August (July and August have in average 0.3 rainy days). Almería enjoys about 3000 hours of sunshine with over 320 sunny days per year in average (6 hours of sunshine in January and 12 in July) so it is one of the sunniest cities in Europe.

Almería is unique, for a city in Continental Europe, for not having any registered temperature under the freezing mark in its recorded weather history. The coldest temperature recorded was 0.2 °C (32.4 °F) on 9 February 1935.[18] Almería has a very warm climate for its latitude, as it has a very similar climate to the upper coastal parts of Baja California, Mexico or Alexandria, Egypt which are located further south between 30-31ºN latitudes.

During the winter, daily maximum temperatures tend to stay around 18 °C (64 °F). At night, the temperature very rarely drops below 9 °C (48 °F). This makes Almería the 2nd city with the warmest winters in Europe, just after Cádiz. The city only receives 26 days of rainfall annually; so no month could be described as truly wet, there are strong differences in terms of rainfall, with coastal parts of the city (such as the Cabo de Gata-Níjar Natural Park) receiving a rainfall amount of 156mm per year, which is also noted as the driest location in Europe, while inland areas (such as the Tabernas Desert) receiving a rainfall amount of 200mm per year, since the average altitude is 600 meters, and it has an average temperature of 17.9 °C (64.2 °F), so it would be classified as a cold desert climate (BWk) bordering a cold semi-arid climate (BSk) according to the Köppen climate classification.

Inland areas of the Almería province are believed to have reached temperatures close to 50 °C (122 °F) in summer (disputed).[19] Perhaps, temperatures above 40 °C (104 °F) are very rare in the city of Almería.

During the warmest months - July and August, the sky is clear and sunny and no rainfall occurs. The typical daily temperatures are around 30 °C (86 °F) during the heat of the day while the minimum temperatures stay around 22 °C (72 °F) during July and August. As is the case for most of coastal Iberia, heatwaves in Almería are much less common than in the interior because of its coastal location; The hottest temperature recorded was 41.6 °C (106.9 °F) in July 2019.[20]

In 2000, a team of geologists found a cave filled with giant gypsum crystals in an abandoned silver mine near Almería. The cavity, which measures 8 x 1.8 x 1.7 metres, may be the largest geode ever found.[23] The entrance of the cave has been blocked by five tons of rocks, and is under police protection (to prevent looters from entering). According to geological models, the cave was formed during the Messinian salinity crisis 6 million years ago, when the Mediterranean sea evaporated and left thick layers of salt sediments (evaporites). The cave is currently not accessible to tourists.

The fesitve events that occur in the municipality are listed below:[24]