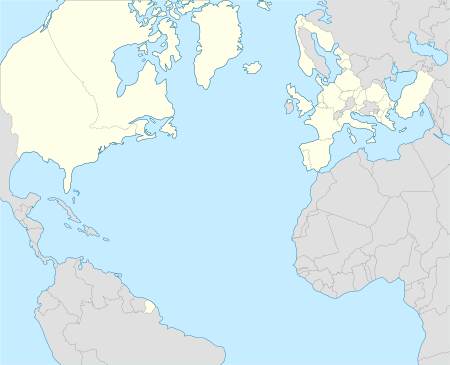 Allied Joint Force Command Naples (JFC Naples) is a NATO military command based in Lago Patria, in the Metropolitan City of Naples, Italy. It was activated on 15 March 2004, after what was effectively a redesignation of its predecessor command, Allied Forces Southern Europe (AFSOUTH), originally formed in 1951.[1] In NATO Military Command Structure terms, AFSOUTH was a "Major Subordinate Command".[2] The commander of JFC Naples reports to the Supreme Allied Commander Europe at the Supreme Headquarters Allied Powers Europe, Casteau, Belgium. 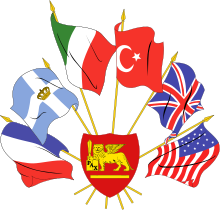 Originally, Allied Forces Southern Europe was one of two major NATO commands in the Mediterranean area, the other being Allied Forces Mediterranean based on the island of Malta, responsible for naval activities in the region. While Admiral Robert B. Carney of the U.S. Navy was appointed as Commander-in-Chief Allied Forces Southern Europe (CinCAFSOUTH) on 19 June 1951,[3] AFMED was not activated until 1953. The delay was due to negotiations and compromises between the Americans and the British, who wished to retain one of their commanders over Britain's traditional sea lines of communication stretching through the Mediterranean to the Suez Canal and beyond. From 1951 to 2003, the Commander-in-Chief of Allied Forces Southern Europe was always a United States Navy admiral, based at Naples, who also held the US Navy position of Commander-in-Chief United States Naval Forces Europe and functioned as the Navy service component commander for United States European Command within the US-only chain of command. AFSOUTH headquarters was established at Nisida island, Naples.

Later in 1953, the various national naval forces within Allied Forces Mediterranean were organised into six Sub-Principal Subordinate Commands (Sub-PSCs), each commanded by an Admiral (including one French (MEDOC), one Greek, one Turkish, one Italian and two British). In time of war, CINCAFMED would be responsible for securing the Sea lines of communications throughout the Mediterranean Sea.[5]

Some of AFSOUTH's first exercises took place in 1952. Operation Ancient Wall was a series of military maneuvers involving ground small unit tactical training, land-based tactical air support, and carrier-based air support under the overall command of Admiral Carney.[8] Exercise Grand Slam was a combined naval exercise held in the Mediterranean Sea between 25 February to 16 March 1952. The exercise included allied warships escorting three convoys of supply ships which were subjected to repeated simulated air and submarine attacks, as well as anti-submarine warfare (ASW) operations and naval gunfire shore bombardment.[9] Operation Longstep was a ten-day naval exercise held in the Mediterranean Sea held during November 1952. It involved over 170 warships and 700 aircraft, and it featured a large-scale amphibious assault along the western coast of Turkey.[10]

In 1957, Operation Deep Water simulated the defence of the Dardanelles from a Soviet attack. The exercise included an 8,000 strong amphibious landing.

AFSOUTH continued to conduct exercises in the 1960s and 1970s, among which was exercise 'Dawn Patrol,' a five-nation naval and air exercise conducted throughout the Mediterranean in 1974.[12] The U.S. contribution to the exercise was based on the USS America carrier battle group. During the 1960s Exercise Deep Furrow appears to have been held annually. Deep Furrow, will be conducted from 20–29 September 1973 in the southern region of Allied Command Europe. Forces from Greece, Turkey and other countries in AF South Command will participate in Exercise Deep Furrow 73, which is scheduled annually by CINCSOUTH. Land forces will hold maneuvers in Greek and Turkish Thrace and naval Force will exercise in the Eastern Mediterranean, including the Aegean Sea; naval activities will include amphibious and carrier operations. As part of the exercise, ground units will be airlifted from their home stations in the United Kingdom and the United States to northwestern Turkey, where Turkish National Forces will execute plans for receiving them. Turkish National Forces will also conduct operations with Hellenic Armed Forces and NATO air units providing fighter-bomber and reconnaissance support throughout the area of operations. Highlights of the exercise in Turkish Thrace will be a multi-national amphibious landing on 25 September 1973 and a multinational airborne operation on 26 September 1973.

From 1967 the overall shape of AFSOUTH did not significantly change until the command was renamed in 2004. There were five principal subordinate commands (PSCs).[13] The number rose to six when Greece was taking part in the military structure; Greece withdrew from the NATO military structure after the Turkish invasion of Cyprus in 1974, and after some behind the scenes negotiating by NATO officials, returned in October 1980. Two land commands, Allied Land Forces Southern Europe and Allied Land Forces Southeastern Europe, were tasked to defend Italy and Turkey respectively. Each was directly responsible to Commander-in-Chief, AFSOUTH, and supported by a tactical air force, Fifth Allied Tactical Air Force in Italy and Sixth Allied Tactical Air Force in Turkey. The two allied tactical air forces were under an overall air command, Allied Air Forces Southern Europe, headquartered at Naples in Italy under a United States Air Force officer, ComAirSouth, responsible himself to CinCAFSOUTH.[14] ComAirSouth held the U.S. national appointment of Commander Sixteenth Air Force for a long period.

Due to political considerations, command of the naval forces in the region was split. Allied Naval Forces Southern Europe, at Naples, operated most of the NATO allies' naval forces in the Mediterranean under an Italian admiral. But due to the U.S. desire to retain control of their nuclear-armed naval forces,[15] the United States Sixth Fleet reported directly to CinCAFSOUTH, supported by a separate headquarters named Naval Striking and Support Forces Southern Europe (STRIKFORSOUTH).

The sixth command was an Allied command responsible for the land defence of Greece, named Allied Land Forces South-Central Europe or LANDSOUTHCENT. However it is not certain that it actually was ever operational, with the 1998/99 NATO Handbook listing it as 'yet to be activated.' Below these PSCs were smaller headquarters such as Maritime Air Forces, Mediterranean, at Sigonella, Sicily, responsible for coordination of the aerial anti-submarine effort, Submarine Forces, South,[16] and the Naval On-Call Force Mediterranean, a multinational escort squadron activated at intervals.

Main article: Structure of the Italian Army in 1989

At the end of the Cold War consisted of the following commands:

From 1992 AFSOUTH was heavily involved in NATO operations in the Balkans, initially with NATO seaborne enforcement of a UN arms embargo, Operation 'Maritime Monitor,' which began in July 1992. This operation was fused with a similar Western European Union effort and thus became Operation Sharp Guard from July 1993. AFSOUTH also directed activities such as Operation Deny Flight from AIRSOUTH headquarters in Italy. Commander-in-Chief AFSOUTH directed the NATO peacekeeping missions in Bosnia & Hercegovina, IFOR and SFOR, from December 1995. While technically in charge of KFOR from mid-1999, General Sir Mike Jackson's autobiography, Soldier, indicates General Wesley Clark at SHAPE in Belgium directly supervised many of KFOR's activities, without going through AFSOUTH, at least during the Allied Rapid Reaction Corps' tour as HQ KFOR in 1999.

Beginning 10 July 1951, Headquarters Allied Land Forces Southern Europe was responsible for the defence of the Italian North-Eastern sector, in cooperation with other NATO nations. During the intervening 40 years, the HQ produced plans and studies to counter a potential invasion by the Soviet-led Warsaw Pact. After 53 years in the city of Verona, what had become Joint Command South (JCS) closed its doors on 15 June 2004.[17] Also closing was Joint Headquarters Southwest in Madrid and Joint Headquarters Southeast/Joint Command Southeast in Izmir.

The reorganisation of AFSOUTH as JFC Naples in 2004 was a part of NATO’s transformation, initiated by the Prague summit of 2002, aimed at adapting the allied military structure to the operational challenges of coalition warfare, to face the emerging threats in the new millennium. The new NATO Command Structure is leaner, and focused on conducting a much wider range of missions.

NATO and Romanian Ministry of Defense representatives activated the Headquarters Multinational Division Southeast (HQ MND-SE) headquarters in Bucharest, Romania, on December 1, 2015.[23][24] The new HQ was activated as part of the Readiness Action Plan agreed at the 2014 Wales Summit. JFC Naples will serve as the operational control of MND-SE. The division HQ will be prepared to execute command and control over the NATO Force Integration Units in Romania and Bulgaria for a range of missions, which includes Article V operations based on NATO advance planning, when authorized by the North Atlantic Council and directed by the Supreme Allied Commander Europe.

The NATO Military Command Structure consists of two strategic commands and is directed by the North Atlantic Council, all of which are liaised by a common Secretary-General:[25]

Commander, Allied Joint Force Command Naples, is responsible for conducting the full range of military operations throughout the NATO Area of Responsibility (AOR) and beyond in order to deter aggression and to contribute to the effective defence of NATO territory and forces, safeguard freedom of the seas and economic lifelines and to preserve or restore the security of NATO nations.[26]