Alliance of Liberals and Democrats for Europe Party

On 10 November 2012, the party chose its current name of ALDE Party, taken from its then-European Parliament group, the Alliance of Liberals and Democrats for Europe (ALDE), which had been formed on 20 July 2004 in conjunction with the European Democratic Party (EDP). Prior to the 2004 European election the European party had been represented through its own group, the European Liberal Democrat and Reform Party (ELDR) Group. In June 2019, the ALDE group was succeeded by Renew Europe.

As of 2020[update], ALDE is represented in European Union institutions, with 65 MEPs and five members of the European Commission. Of the 27 EU member states, there are six with ALDE-affiliated Prime Ministers: Mark Rutte (VVD) in the Netherlands, Xavier Bettel (DP) in Luxembourg, Jüri Ratas (Estonian Centre Party) in Estonia, Andrej Babiš (ANO) in the Czech Republic, Sophie Wilmès (MR) in Belgium and Micheál Martin (FF) in Ireland. ALDE member parties are also in governments in four other EU member states: Croatia, Finland, Latvia and Slovenia. Some other ALDE member parties offer parliamentary support to governments in Croatia, Denmark, Italy, Romania and Sweden. Charles Michel, former Belgian Prime Minister, is current President of the European Council.

The day-to-day management of the ALDE Party is handled by the Bureau, the members of which are:[5]

On 10 November 2012, the ELDR Party adopted the name of the alliance between the two parties, to match the parliamentary group and the alliance.

On 12 June 2019, the ALDE group was succeeded by a new enlarged group, Renew Europe, which primarily consists of ALDE and EDP member parties and France's La République En Marche! (LREM).[7]

ALDE Member Parties contribute four out of the 28 members of the European Commission:

National parliaments outside the European Union

Proportion of ALDE Party MEPs per country as of 2004[update] 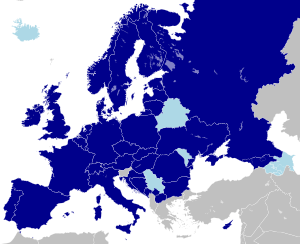