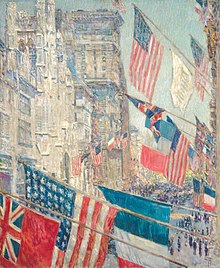 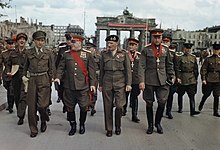 An alliance is a relationship among people, groups, or states that have joined together for mutual benefit or to achieve some common purpose, whether or not explicit agreement has been worked out among them.[1] Members of an alliance are called allies. Alliances form in many settings, including political alliances, military alliances, and business alliances. When the term is used in the context of war or armed struggle, such associations may also be called allied powers, especially when discussing World War I or World War II.

A formal military alliance is not required for being perceived as an ally—co-belligerence, fighting alongside someone, is enough. According to this usage, allies become so not when concluding an alliance treaty but when struck by war.

The Allied Powers in World War I (also known as the Entente Powers) were initially the United Kingdom, France, the Russian Empire, Belgium, Serbia, Montenegro and Japan, joined later by Italy, Portugal, Romania, the United States, Greece and Brazil. Some, such as the Russian Empire, withdrew from the war before the armistice due to revolution or defeat.

After the end of World War II and during the Cold War, the North Atlantic Treaty Organization (NATO) was formed as a political and military alliance that promotes democratic values.[3]

More recently, the term "Allied forces" has also been used to describe the coalition of the Gulf War, as opposed to forces the Multi-National Forces in Iraq which are commonly referred to as "Coalition forces" or, as by the George W. Bush administration, "the coalition of the willing".

Scholars are divided as to the impact of alliances. Several studies find that defensive alliances deter conflict.[4][5][6][7] One study questions these findings, showing that alliance commitments deterred conflict in the prenuclear era but has no statistically meaningful impact on war in the postnuclear era.[8][9] Another study finds that while alliance commitments deter conflict between sides with a recent history of conflict, alliances tend to provoke conflicts between states without such a history.[10]

A 2000 study in the Journal of Conflict Resolution found that allies fulfill their alliance commitments approximately 75% of the time.[11] Most research suggests that democracies are more reliable allies than non-democracies.[12][13][14] A 2004 study did however question whether alliance commitments by democracies are more durable.[15] A 2018 study updated and extended the data from the 2000 Journal of Conflict Resolution study and found that allies only fulfill their commitments about 50% of the time from 1816 to 2003.[16] According to the study, "States honored their alliance commitments 66% of the time prior to 1945 but the compliance rate drops to 22% from 1945 to 2003. Moreover, the rates of fulfillment for defense pacts (41%) and nonaggression pacts (37%) are dramatically lower than offensive alliances (74%) and neutrality agreements (78%)."[16]

One of the most profound effects of alliances can be seen in technological innovation, due to conduits of knowledge flows that are open between allies but closed between rivals.[17]

Map indicating international preferences for principal ally in the case a country were attacked, as of 2017.

According to a 2017 poll by WIN/GIA, the United States was the most preferred ally internationally. Russia and China, who preferred one another, both trailed America globally. Four countries, Bulgaria, Greece, Slovenia and Turkey, preferred Russia, despite being members of NATO.[18]