A member of the noble Lambsdorff family, he holds an Imperial Russian comital title.

Lambsdorff grew up in Hamburg, Brussels, and Bonn, attending the Catholic Academic High School Aloisiuskolleg at Bonn-Bad Godesberg until 1985, before going up to the University of Bonn.

From 1991 until 1993 Lambsdorff studied at Georgetown University on a Fulbright Scholarship graduating as a MA in History and an MS in Foreign Service (1993).

After diplomatic training, Lambsdorff served on the German Policy Planning Staff (together with Jorgo Chatzimarkakis, his contemporary and fellow FDP MEP) before becoming director of the Bundestag office of former German Foreign Minister Klaus Kinkel, after the FDP left government in 1998.[2]

Lambsdorff was first elected to the European Parliament in 2004 and was confirmed in 2009 and 2014. Held in high regard, he was widely viewed as a possible successor to Graham Watson as leader of the Alliance of Liberals and Democrats for Europe Group in the parliament, but the post went instead to Guy Verhofstadt.[3] From 2011, Lambsdorff chaired the 12-member German FDP delegation in the European Parliament, before subsequently being elected Leader of the European Liberals and Democrats Group in 2014.

Until 2014, Lambsdorff served as member of the European Parliament's Committee on Foreign Affairs and the EU-Delegation for relations with the People's Republic of China. He also served as a deputy on the European Parliament Committee on Culture and Education and on the Delegation to the EU-Turkey Joint Parliamentary Committee DACP as well as the ACP–EU Joint Parliamentary Assembly. During his tenure, he steered efforts to create a single EU-market for Defence and Security-related equipment as parliamentary rapporteur in 2009.[4] In 2010, he joined the Friends of the EEAS, a unofficial and independent pressure group formed because of concerns that the High Representative of the Union for Foreign Affairs and Security Policy Catherine Ashton was not paying sufficient attention to the Parliament and was sharing too little information on the formation of the European External Action Service.[5]

In January 2014, at the FDP Convention in Bonn, Lambsdorff was elected as his party's lead candidate for the European Parliament elections receiving a resounding 86.2% of the vote.[9]

From 2014, Lambsdorff served as one of the fourteen Vice Presidents of the European Parliament who sit in for the president in presiding over the plenary. In this capacity, he was also in charge of representing the parliament at multilateral bodies, including the United Nations and the World Trade Organization, as well as of the parliament’s contacts with European business associations.[10] In addition, he was a member of the Democracy Support and Election Coordination Group (DEG), which oversees the Parliament’s election observation missions.[11]

Member of the German Bundestag, 2017–present

Lambsdorff has been a member of the German Bundestag since the 2017 national elections. He has since been serving as one of six deputy chairpersons of the FDP parliamentary group under the leadership of its chairman Christian Lindner, where he oversees the group's activities on foreign policy.[12] In addition, he chairs the German-Israeli Parliamentary Friendship Group.

Roles within the FDP

Following the 2017 state elections in North Rhine-Westphalia, Lambsdorff was part of the FDP team in the negotiations with Armin Laschet’s CDU on a coalition agreement. He led his party's delegation in the working group on European affairs; his co-chair of the CDU was Matthias Kerkhoff.[13]

Lambsdorff has become increasingly critical of an accession of Turkey to the European Union and publicly declared that accession talks should be suspended until the Turkish government returns to the direction of the EU.[14][15] In 2011, he accused Prime Minister Recep Tayyip Erdoğan of using "gunboat rhetoric" in his statements about Israel, adding that "with a strident anti-Israel course, it isn't making any friends in Europe."[16] On the 2014 post-election protests in Turkey, he commented: "There are more journalists in jail [in Turkey] than in China or Iran and now the Prime Minister wants to close down YouTube and Twitter because people are saying things he doesn’t like."[17] When Erdoğan, then in his position as President of Turkey, disparaged German president Joachim Gauck as a "pastor" in 2014, Lambsdorff demanded that "the negotiations [on EU accession] should be put in a deep freeze."[18]

Following British Prime Minister David Cameron's veto of EU-wide treaty change to tackle the European debt crisis in 2011, Lambsdorff was quoted by German weekly Der Spiegel as saying: "It was a mistake to admit the British into the European Union."[19]

Along with his fellow parliamentarians Marietje Schaake, Ramon Tremosa and members of the Greens/EFA group, Lambsdorff nominated Leyla Yunus, imprisoned Azerbaijani human rights activist and director of the Institute of Peace and Democracy, for the 2014 Sakharov Prize.[21]

As a consequence of the European debt crisis, Lambsdorff told the Financial Times Deutschland in 2012 that it might make sense to give the European Commissioner for Economic and Monetary Affairs greater influence over euro-zone countries’ budgets.[22]

In December 2014, Lambsdorff proposed that the English language should be mastered by servants of the public administration, and should later become an official language of Germany, in addition to German. According to Lambsdorff, as experienced in other countries with a good knowledge of English in public institutions, this should help to attract more skilled migrants to prevent labor shortage, to ease business for investors and to establish a more welcoming culture.[24] As evaluated by a representative YouGov survey, 59 percent of all Germans would welcome the establishment of English as an official language in the whole European Union.[25] 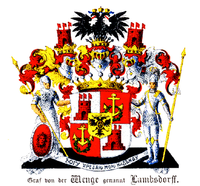 Count Alexander Lambsdorff is a member of the Baltic branch of the noble Lambsdorff family; his family branch emigrated from Westphalia to the Baltic region in the early 15th century and was recognised as noble in Courland in 1620. The family owned large estates in modern-day Latvia and Estonia, and family members distinguished themselves as military officers in the service of the Russian Empire. One of Alexander Lambsdorff's ancestors, Count Matthias von der Wenge Lambsdorff, was a Russian general and was conferred the hereditary comital title in 1817 by Alexander I of Russia.[citation needed] In 1880 the family was authorised by royal licence to use the titles Baron of the Wenge and Count of Lambsdorff in the Kingdom of Prussia. His father, Count Hagen Lambsdorff (born 1935), was the first German Ambassador to Latvia from 1991 and later Ambassador to the Czech Republic from 1999 to 2001; his uncle, Count Otto Lambsdorff (1926–2009), was a prominent liberal politician and Federal Minister for Economic Affairs from 1977 to 1982.

In 1994, Lambsdorff married Franziska, daughter of Werner von Klitzing and Princess Wilhelmina of Wied,[32] by whom he has two children.[33]

Regarding personal names: Until 1919, Graf was a title, translated as Count, not a first or middle name. The female form is Gräfin. In Germany since 1919, it forms part of family names.

It is equivalent to the noble rank of Earl (female form: Countess).