King Albert II is the last living child of King Leopold III and Queen Astrid, born princess of Sweden. He is the younger brother of Grand Duchess Joséphine-Charlotte of Luxembourg and King Baudouin, whom he succeeded upon Baudouin's death in 1993. He married Donna Paola Ruffo di Calabria (now Queen Paola), with whom he had three children. Albert's eldest son, Philippe, is the current King of the Belgians.

On 3 July 2013, King Albert II attended a midday session of the Belgian cabinet. He then announced that, on 21 July, Belgian National Day, he would abdicate the throne for health reasons. He was succeeded by his son Philippe on 21 July 2013. Albert II was the fourth monarch to abdicate in 2013, following Pope Benedict XVI, Queen Beatrix of the Netherlands, and Emir Hamad bin Khalifa of Qatar.[2] In so doing, he was also the second Belgian monarch to abdicate, following his father Leopold III who abdicated in 1951, albeit under very different circumstances.

Prince Albert was born in Stuyvenberg Castle, Brussels, as the second son and youngest child of King Leopold III and his first wife, Princess Astrid of Sweden. He was second in line to the throne at birth, and was given the title Prince of Liège. Queen Astrid died in a car accident on 29 August 1935, in which King Leopold was lightly injured but survived. The King remarried to Mary Lilian Baels in 1941, an unpopular union that produced three more children: Prince Alexandre, Princess Marie-Christine and Princess Marie-Esméralda.

During World War II, on 10 May 1940, at the time when Belgium was being invaded, Prince Albert, his elder sister Princess Joséphine-Charlotte and his elder brother Prince Baudouin, left the country for France and later Spain. The Prince and the Princess returned to Belgium on 2 August 1940. They continued their studies until 1944, either at Laeken, or at the Castle of Ciergnon in the Ardennes. In June 1944, at the time of the Allied landings, King Leopold, his wife Princess Lilian and the royal children were deported by the Germans to Hirschstein, Germany, and later to Strobl, Austria, where they were liberated by the American Army on 7 May 1945. Owing to the political situation in Belgium, King Leopold and his family moved to the villa "Le Reposoir" in Pregny, Switzerland, when they left Austria in October 1945 and stayed until July 1950. During that time, Prince Albert would continue his education in a secondary school in Geneva. King Leopold III, accompanied by Prince Baudouin and Prince Albert, returned to Belgium on 22 July 1950.[1]

King Albert II and Queen Paola with US President George W. Bush and First Lady Laura Bush at the Royal Palace in Brussels in 2005

In 1958, Albert went to the Vatican to witness the coronation of Pope John XXIII. At a reception at the Belgian Embassy, he met Italian Donna Paola Ruffo di Calabria. Prince Albert proposed marriage to her, to which she accepted. Two months after their meeting, the prince introduced his future wife to his family, and four months later to the press. The couple married on 2 July 1959 and have three children, two sons and a daughter, twelve grandchildren and two great-grandchildren. Their children are:

In 1997, the Belgian weekly magazine 't Scheldt reported that the Belgian sculptor Delphine Boël (born in 1968) was King Albert II's extramarital daughter.[3] It took some years for the Belgian mainstream media to echo this news. According to Baroness Sybille de Selys Longchamps, the mother of Delphine, she and Albert shared an 18-year-long relationship[4] into which Delphine was born. In June 2013, Boël summoned the then King, the then Duke of Brabant and the Archduchess of Austria-Este to appear in court. She hoped to use DNA tests to prove that she is the King's daughter. As the King enjoyed complete immunity under the law, Boël decided to summon his elder children as well.[5][6] After the King's abdication, she abandoned her first suit to introduce a second one only against the King as he was no longer protected by immunity and the first claim would have been judged according to the situation at the time of the introduction of the claim.[7] In March 2017, the Court ruled that her claim was unfounded, and her lawyers said she would take the claim to appeal.[8] On 25 October 2018, the Court of Appeal decided that Delphine Boël is not a descendant of Jacques Boël, and ordered King Albert to undergo DNA testing. His lawyer announced that he would seek further advice about a possible referral to Belgium's Cour de Cassation / Hof van Cassatie.[9] In 2019, the King's lawyer confirmed he would not provide a DNA sample in the case.[10]

On 29 May 2019, it was reported by CNN that Albert II had submitted a DNA sample after a Belgian court ruled on 16 May that he would be fined 5,000 euros for each day that he failed to do so, although he would continue to challenge the ruling, according to his attorney, Alain Berenboom [fr].[11][12]

"The king will treat all his children as equal," Berenboom said, according to VTM News. "King Albert now has four children."[14][15]

Currently Boël is his biological daughter, but not yet his legal daughter. A court has to decide who has the legal paternity over Boël.[16][17]

The King reviewing the army during the Belgian National Day, 2011

As the younger brother of the childless King Baudouin, Prince Albert was the heir-presumptive to the throne. Albert's son Philippe was groomed to eventually succeed. On Baudouin's death, Albert was sworn in before parliament, on 9 August 1993, as King of the Belgians.[18]

As King, Albert's duties included representing Belgium at home and abroad on state visits, trade missions, and at high level international meetings as well as taking an interest in Belgian society, culture and enterprise.[19]

In 1984, he set up the Prince Albert Foundation, to promote expertise in foreign trade.[20]

The King had a constitutional role which came into play in 2010–2011 when Belgium's parliament was unable to agree on a government. When the crisis was resolved, Albert swore in the new government.[21]

Albert sparked controversy in his December 2012 Christmas speech by comparing modern "populist movements" with those of the 1930s. This was seen by several political commentators, as well as many Flemish politicians, as aimed implicitly at the large Flemish nationalist party, the N-VA.[22] Bart De Wever, the party's leader, called for the King's role in the formation of Belgian governments to be changed in the wake of this comment since he "could no longer see the monarch as playing the constitutional role of referee."[22]

On 3 July 2013, 79-year-old King Albert II attended a midday session of the Belgian cabinet, where he revealed his intention to abdicate to Prime Minister Elio Di Rupo and to the deputy prime ministers. According to a letter sent by the King to the Prime Minister and dated 3 July 2013, and which was made public, the King had already broached the topic of his intention to abdicate several times with the Prime Minister, who had asked him to reconsider it.[23] At 6 PM (CET) the King announced in a recorded radio and television speech that on 21 July, Belgium's National Day, he would abdicate the throne for health reasons. He was succeeded by his elder son, Philippe.[2] 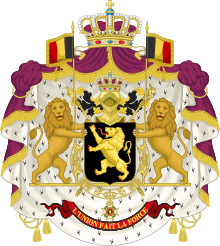 Coat of arms as King of the Belgians 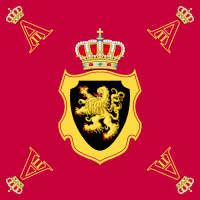