Topographical map of the Albanian Riviera.

The Albanian Riviera (Albanian: Riviera Shqiptare Albanian pronunciation: [ɾiˈvi:ɛɾa ʃcipˈta:rɛ]), also popularly known as Bregu, is a coastline along the Northeastern Ionian Sea in the Mediterranean Sea encompassing the districts of Sarandë and Vlorë in Southwestern Albania. It forms an important section of the Albanian Ionian Sea Coast dotted with the villages of Palasë, Dhërmi, Vuno, Himara, Qeparo, Borsh, Piqeras, Lukovë and Sarandë.[1]

The riviera should not be confused with the entire coastline of the country, which includes the Ionian Sea Coast, and the mostly flat Adriatic Sea Coast in the north. The Ceraunian Mountains separates the coast from the hinterland. The area is a major nightlife, ecotourist, and elite retreat destination in Albania. It features traditional Mediterranean villages, ancient castles, churches, monasteries, secluded turquoise beaches, bays, mountain passes, seaside canyons, coves, rivers, underwater fauna, caves, and orange, lemon, and olive groves. During the classical times, 48 BC during his pursuit of Pompey, Julius Caesar set foot and rested his legion at Palasë. He continued onto Llogara Pass in a place later named Caesar's Pass.

The region gained international attention after the 2009 reconstruction of the coastal road SH8, the 2010 tour stop of DJ Tiësto in Dhermi,[2] and the filming of a Top Gear episode featuring a breathtaking car pursuit along the winding coastal road.[3][4] The Albanian Riviera was proclaimed as the 2012 Top Value Destination by Frommer's.[5] The area has been host to several international music festivals such as Kala Festival, Soundwave Albania, and Turtle Fest, while becoming known for its long standing nightclubs such as Havana Beach Club near Dhermi and recently opened Folie Marine in Jale beach.

As part of the regional master plan,[6] the World Bank and other institutions are financing local infrastructure projects,[7][8] including the renovation of roofs and facades of traditional houses overlooking the Riviera, town squares redesign, and the construction of water supply and treatment plants.[9][10] 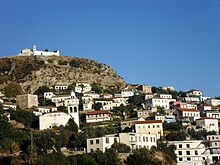 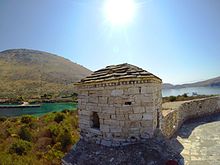 The Llogara National Park is known from its vibrant flora and fauna with over 100 different types of wild animals and birds including: deer, wild cats, foxes, etc. The mixture of refreshing high altitude mountain air and proximity of the sea makes it very attractive destination for tourists. The area is also important for the growth of eco-tourism, picnic, hiking and air sports.

The Ali Pasha Castle was named after Ali Pasha of Tepelenë, who resided there until 1820. The current fortress was rebuilt in 1819 from its surface with 3 towers. Until 1820, it was the second residence of Ali Pasha. The castle described and pictured is popularly known as The Triangular Fortress. Built under Venetian dominion in the late 15th or early 16th century, it provided a stronghold for the Venetians on Corfu to exploit fishing, grazing, olives and timber in and around Butrint.[12] The Borsh Castle is also known as the Castle of Sopot by the name of the hill on which it is located.

Lëkurësi Castle is located on a strategic hill point overlooking the horseshoe bay of Sarandë. From here one can view the entire town as well as the islands of Ksamil, Corfu Island and the Butrint Lagoon.

Porto Palermo Castle located a few kilometers south of Himarë in southern Albania. It is situated in the bay of Porto Palermo. Huffington Post ranked Porto Palermo first among 15 Undiscovered European Destinations for 2014.