Due to the strong presence of Albanians in Italy and the historic presence of the Arbëreshë community there, the two countries today enjoy very friendly diplomatic relations. There are frequent high-level contacts between the governments of Albania and Italy. Both countries are members of many international organizations and share common political views about the Balkans and the world, with Italy being a strong supporter of the EU candidacy of Albania. During a recent visit of the Italian Prime Minister Matteo Renzi in Tirana was considered by him as Italy's closest partner in the region.[1]

There is a great degree of historical and cultural similarities between Albanians and Italians which has aided cultural relations greatly. Albania is also home to 20,000 Italian migrants and has a 5,000 Italian indigenous community.[2]

The countries are as well members of the North Atlantic Treaty Organisation (NATO) and the Council of Europe. As a member and founder of the European Union (EU), Italy supports Albania in its euro-integration path and is considered as one of the strongest supporter of Albania.

During the 2019-20 coronavirus pandemic, Albania sent Italy 90 doctors and nurses to cope with the pressure the Italian health system was experiencing. The act of solidarity further strengthened the good relations between the two nations.[3]

Italian soldiers in Vlorë, Albania during World War I. The tricolour flag of Italy bearing the Savoy royal shield is shown hanging alongside an Albanian flag from the balcony of the Italian headquarters. 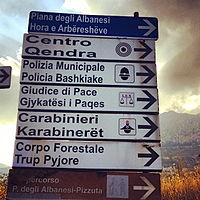 Formal relations between the two countries commenced on 1912, as the Kingdom of Italy supported the Albanian Declaration of Independence in 1912.

During the World War I, the Italian protectorate over Albania was established by the Kingdom of Italy in an effort to secure a de jure independent Albania under Italian control. It existed from June 23, 1917 until the summer of 1920. From June 4 to September 3, 1920 a series of battles between Italian forces garrisoned throughout Vlorë region and Albanian nationalists divided in small groups of fighters happened and these battles were later called as the Vlora War, which ended the Italian Protectorate over Albania.

Later during the monarchy period and the reign of King Zog, Italy became the closest ally of Albania, declaring once again a de jure protectorate over the small Kingdom. Italian was being taught as a second languages in all schools in the country and the Economy was highly dependent on loans and financial aid given from Italy. In the spring of 1925 two important concessions were signed with Italy; the first was the right to found a national bank and the second was the approval of the establishment of an Italian company (SVEA), to develop the economy of Albania. Later the National Bank of Albania was founded with Italian capital and Italy helped to issue and introduce the official currency of Albania, the Lek.[4]

On April 7, 1939, Mussolini's troops invaded Albania. Despite some stubborn resistance, especially at Durrës, the Italians made short work of the Albanians. King Zog was forced into exile, and the country was made part of the Italian Empire as a separate kingdom in personal union with the Italian crown.

After the capitulation of Italy in 1943, Nazi Germany occupied Albania and after the end of World War II relations between Italy and Albania were interrupted. During the communist rule in Albania, the country was isolated and no relations were carried with western countries, including Italy.

Relations were reestablished after the Fall of communism in Albania. After the breakdown of the communist regime, Italy had been the main immigration target for Albanians leaving their country. This was because Italy had been a symbol of the West for many Albanians during the communist period and because of its geographic proximity. From March 1997, Italy instituted a strict patrol of the Adriatic in an attempt to curb Albanian immigration. and since then Italy has helped Albania's economy during this transition time. Italy has also helped on restoring law and order in Albania after the 1997 rebellion, through Operation Alba.

The Italian Embassy Building in Tirana

Italy is the main export partner of Albania, with 42.8%[5] of the exports and also the main import partner with 33.4% of all products imported by Albania. Italy is one of the biggest donors for Albania and also a big supporter of the Euro-Atlantic integration of the Republic of Albania.[citation needed] Both countries share a maritime border and there is an Exclusive economic zone between them. Italy has financed different projects in many fields, such as political, judicial, energy and tourism.

On 24 November 2008, the then Prime Minister of Italy, Silvio Berlusconi, carried a state visit in Tirana, where he met with his counterpart PM Sali Berisha. During this visit an agreement was signed on the construction of two coal-fired power plants, financed by Italy which would help boost Albania's economy.[6]

Former President of Italy, Giorgio Napolitano visited Tirana on 4 March 2014, where he met with the President, the Prime Minister and the Speaker of Parliament and he also held a meeting with the Italian community that lives in Tirana.[7] Later on 10 March governments of both countries signed an agreement on energy cooperation promoting interconnection and integration of electric energy and natural gas systems in both countries, which was important decision for the Trans Adriatic Pipeline project, which will transport natural gas, starting from Greece via Albania and the Adriatic Sea to Italy and further to Western Europe.[8]

On December 20, 2014 the Italian Prime Minister, Matteo Renzi visited Albania, during a state visit in which he met with the PM of Albania Edi Rama, President Bujar Nishani and members of the Italian community in Tirana. During this meeting an agreement on the recognition of pensions was signed. During his speech, PM Renzi said that Albania is Italy's closest ally in the region and that Italy fully supports the future integration of Albania in EU.[9][10]

On 13 October 2016, the President of the Chamber of Deputies of Italy Laura Boldrini visited Tirana, once again supporting the integration path of Albania and the juridical reform recently passed by the Parliament.[11]