France Lazio Comune
Not to be confused with alatrism.
Comune in Lazio, Italy

Alatri (Latin: Aletrium) is a town and comune of province of Frosinone in the Italian region of the Lazio, with c. 30,000 inhabitants. A part of the traditional region of Ciociaria, it is known for its megalithic acropolis.

The area of the modern city was settled as early as the 2nd millennium BC.

Aletrium was a town of the Hernici which, together with Veroli, Anagni and Ferentino, formed a defensive league against the Volsci and the Samnites around 550 BC. In 530 they allied with Tarquinius Superbus' Rome, confirming the Etruscan influence in the area attested also by archaeological findings. Alatri was defeated by Rome in 306 BC and forced to accept the citizenship. In Cicero's time it was a municipium (an ancient coat of arms can be seen with the write "S.P.Q.A."), and continued in this position throughout the imperial period.[3]

After the fall of the Western Roman Empire, the city decayed, the only respected authority being represented by the Christian bishop. During the reign of Theodoric the Great (5th century AD) the patrician Liberius promoted the construction of a monastic community, one of the most ancient in the West, where in 528 St. Benedict sojourned briefly. In 543, during the Gothic Wars, Alatri was sacked and destroyed by Totila's troops. 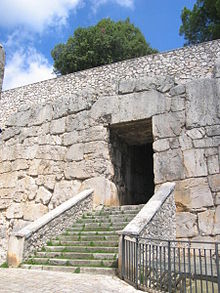 In the 12th century the city became an important stronghold of the popes when they were obliged to leave the then unsafe Rome. In the following century it became a free commune, although under the authority of the bishops and the pope, governed by consuls until 1241, when a podestà was introduced. In the following centuries it flourished economically and expanded, conquering Collepardo, Guarcino, Trivigliano, Vico and Frosinone, though often hampered by inner strifes. In the 15th century Alatri started to lose its freedom, due to the involvements of Ladislaus of Naples and Pope Martin V. After the short seigniory of Filippo Maria Visconti in 1434, the city had to accept the Papal suzerainty.

Struggles with the neighbouring communes continued, and in 1556 it was occupied by Spanish soldiers. During the Roman Republic, it remained loyal to the Pope. During the Napoleonic occupation (1809–1814) numerous members of the papal administration, as well as bishop Giuseppe della Casa, were deported to France. It became part of Italy in 1870.

Alatri has well-preserved fortifications constructed of tetrahedral and polygonal blocks of local limestone well jointed. It is almost entirely an embanking wall, as is the rule in the cities of this part of Italy, with a maximum height, probably, of about 9 metres (30 ft). Two of the gates (of the perhaps five once existing) are still to some extent preserved, and three posterns are to be found.[4]

In the centre of the city rises a hill which was adopted as the citadel. Remains of the fortifications of three successive periods can be traced, of which the last, perhaps a little more recent than that of the city wall, is the best preserved. In the first two periods the construction is rough, while in the third the blocks are very well jointed, and the faces smoothed; they are mostly polygonal in form and are much larger (the maximum about 3 by 2 m) than those of the city wall. A flat surface was formed partly by smoothing off the rock and partly by the erection of huge terrace walls which rise to a height of over 15 metres (49 ft), enclosing a roughly rectangular area of 220 by 100 metres (720 by 330 ft). Two approaches to the citadel were constructed, both passing through the wall; the openings of both are rectangular. The architrave of the larger, known as Porta Maggiore, measures about 5 metres (16 ft) in length, 1.5 metres (4.9 ft) in height, 1.8 metres (5.9 ft) in thickness; while that of the smaller is decorated with three phalli in relief. Later, though probably in ancient times, a ramp was added on the northern side. In the centre of the arx was a building on the site of the present cathedral, of which only a small portion is preserved. Remains of a high-pressure aqueduct, which supplied the town with water and was constructed with other public buildings by L. Betilienus Varus, may still be traced. A temple was excavated in 1889 a few miles to the north of the town, and many fragments of the painted terracottas with which it was decorated were found. A reconstruction of it has been erected in the National Etruscan Museum at Rome.[4]

The ancient church of St. Sylvester.

In the neighborhood are:

Alatri is divide into the following rioni (quarters):

Alatri is twinned with: