Al-Aḥsāʾ (Arabic: الْأَحْسَاء‎, al-ʾAhasā), also known as al-Ḥasāʾ (الْحَسَاء) or Hajar (هَجَر), is a traditional oasis historical region in eastern Saudi Arabia whose name is used by the Al-Ahsa Governorate, which makes up much of that country's Eastern Province. The oasis is located about 60 km (37 mi) inland from the coast of the Persian gulf.

With an area of around 85.4 km2 (33.0 sq mi), Al-Ahsa Oasis is the largest oasis in the world. There are more than 2.5 million palm trees including date palms in the oasis, which is fed from a huge underground aquifer and irrigated by the flow of more than 280 artesian springs, which allows agriculture all year round in a region that is otherwise sand desert.[1]

Al-Ahsa is part of the region known historically for its high skill in tailoring, especially in making bisht, a traditional men's cloak.[2] Al-Bahrain geographical province is in Eastern Arabia, which includes the eastern coast of the Arabian Peninsula down to the borders of the UAE, Oman, and also includes the island of Awal (modern-day Bahrain). Historically, Al-Ahsa was the main city in Al-Bahrain province, making up most of its population and providing most of its agricultural output.

The site has become a World Heritage site in 2018.[3] It has also been part of UNESCO Creative Cities Network since December 2015.[4] According to one author, the oases of Al-Hasa and Al Ain (in the UAE, on the border with Oman) are the most important in the Arabian Peninsula.[5]

Al-Ahsa is a plural word of "Al-Ḥisā" (Arabic: ٱلْحِسَى‎) which refers to the accumulated sand with an impermeable layer underneath. Thus, when rain comes down, the water will soak through the sand, protected from evaporation by the sand, and be retained by the base layer, forming an aquifer. Hence, the site would become when drilled like a sweet cold spring.[6]

Al-Ahsa has been inhabited since prehistoric times, due to its abundance of water in an otherwise arid region.[7] Natural fresh-water springs have surfaced at oases in the region for millennia, encouraging human habitation and agricultural efforts (date palm cultivation especially) since prehistoric times.[citation needed]

The oasis reagon and the name Hajar (also Hagar, Haǧar) specifically may be related to the Ancient Near East toponym Agarum, mentioned in Dilmunite inscriptions as the original home of their chief deity Inzak. If so, Agarum probably referred to the mainland Arabia opposite of Bahrain.[8] According to the hypothesis, the Dilmun civilization originated at the oases of Eastern Arabia, but later relocated to the isle of Bahrain. This interpretation is not without criticism, however, and other sources place Agarum on the isle of Failaka.[9]

Eastern Arabia was conquered by the emerging Rashidun Caliphate during the 7th century. It was later inherited by the Umayyads and Abbasids.[citation needed] In 899 A.D., the region came under the control of the Qarmatian leader, Abu Tahir al-Jannabi,[10] and was declared independent from the Abbasid Caliphate of Baghdad. Its capital was at al-Mu'miniya near modern Hofuf. By circa 1000, Al-Hasa became the 9th largest city worldwide supporting 100,000 inhabitants.[11] In 1077, the Qarmatian state of Al-Ahsa was overthrown by the Uyunids. Al-Ahsa subsequently fell under the rule of the Bahrani dynasty of the Usfurids, followed by their relatives, the Jabrids, who became one of the most formidable powers in the region, retaking the islands of Bahrain from the princes of Hormuz. The last Jabrid ruler of Bahrain was Muqrin ibn Zamil.

In 1521, the Portuguese Empire conquered the Awal Islands (the islands that comprise present day Bahrain) from the Jabrid ruler Muqrin ibn Zamil, who fell strongly in battle.[12] The Jabrids struggled to maintain their position on the mainland in the face of the Ottomans and their tribal allies, the Muntafiq. In 1550, Al-Ahsa and nearby Qatif came under the sovereignty of the Ottoman Empire with Sultan Suleiman I.[13] Al-Ahsa was nominally the Eyalet of Lahsa in the Ottoman administrative system, and was usually a vassal of the Porte. Qatif was later lost to the Portuguese.[citation needed]

The Ottomans were expelled from Al-Ahsa in 1670,[13] and the region came under the rule of the chiefs of Banu Khalid tribe.

Al-Ahsa, along with Qatif, was incorporated into the Wahhabist Emirate of Diriyah in 1795, but returned to Ottoman control in 1818 with an invasion ordered by Muhammad Ali of Egypt. The Banu Khalid were again installed as rulers of the region but, in 1830, the Emirate of Nejd retook the region.

Direct Ottoman rule was restored in 1871,[13] and Al-Ahsa was placed first under Baghdad Vilayet and with Baghdad's subdivision Basra Vilayet in 1875. In 1913, ibn Saud, the founder of modern Saudi Arabia, annexed Al-Ahsa and Qatif into his domain of Najd.[14]

On December 2, 1922, Percy Cox officially notified Kuwait's Emir Sheikh Ahmad Al-Sabah that Kuwait's borders had been modified.[15] Earlier that year, Major John More, the British representative in Kuwait, had met with Ibn Saud of Saudi Arabia to settle the border issue between Kuwait and Najd. The result of the meeting was the Uqair Protocol of 1922, in which Britain recognized ibn Saud's sovereignty over territories claimed by the emir of Kuwait.

Al-Ahsa under the control of the al Saud 3rd country, it was taken from the Ottomans in 1913, bringing him control of the Persian Gulf coast and what would become Saudi Arabia's vast oil reserves.

Recently, Al-Ahsa Oasis has been nominated as one of the seven wonders of the world.[citation needed]

The oasis of palm trees

Historically, Al-Hasa was one of the few areas in Arabian Peninsula growing rice.[16] In 1938, petroleum deposits were discovered near Dammam,[17][18] resulting in the rapid modernization of the region. By the early 1960s, production levels reached 1 million barrels (160,000 m3) per day. Today, Al-Hasa engulfs the largest conventional oil field in the world, the Ghawar Field.

Al-Hasa is known for its palm trees and date palms. Al-Hasa has over 2.5 million palm trees which produce over 100 thousand tons of dates every year.

The number of springs and freshwater sources in Al-Hasa oasis range from 60 to 70 like those in Ummsaba'ah, Al-Harrah and Al-Khadod.

Al-Hasa oasis filled with a number of archaeological sites that give witness to the area's importance. 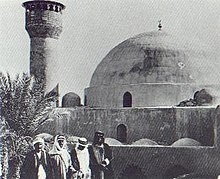 12 locations were defined as the Cultural Landscape of Al-Hasa Oasis (the World Heritage site):[3]

Al-Ahsa has a hot desert climate (Köppen Climate Classification: BWh), with long, extremely hot summers and short, very mild winters. The oasis has a very low annual precipitation of 83.3 mm (3.28 in), but receives a little amount of rain in winter and spring.