The town is named for HMS Ajax, a Royal Navy cruiser that served in World War II. It is approximately 25 kilometres (16 mi) east of Toronto on the shores of Lake Ontario and is bordered by the City of Pickering to the west and north, and the Town of Whitby to the east.

Before the Second World War, the territory in which Ajax is situated was a rural part of the township of Pickering. The town itself was first established in 1941 when a Defence Industries Limited (D.I.L.) shell plant was constructed and a townsite grew around the plant. By 1945 the plant had filled 40 million shells and employed over 9,000 people at peak production. It had its own water and sewage treatment plants, a school population of over 600, and 50 km (31 mi) of railroad and 50 km (31 mi) of roads. The entire D.I.L. plant site included some 12 km2 (5 sq mi). People came from all over Canada to work at D.I.L.

The burgeoning community received its name in honour of the first significant British naval victory of the war. From December 13 to December 19, 1939, a flotilla of British warships — HMS Ajax, HMS Exeter and HMS Achilles — commanded by Commodore Henry Harwood — engaged and routed the powerful German pocket battleship Admiral Graf Spee at the Battle of the River Plate, near the Uruguayan port of Montevideo in South America. Ajax was chosen as the name of this war-born community.[3]

After the war, the University of Toronto leased much of the D.I.L. plant to house the flood of newly discharged soldiers who had enrolled as engineering students. War machines were moved out and the buildings were converted to classrooms and laboratories. By 1949, the last year of the University of Toronto, Ajax Division, some 7,000 engineering students had received their basic training there.

Following the departure of the University of Toronto, the town's growth was largely due to the vision of George W. Finley of Canada Mortgage and Housing Corporation, and Ajax became a planned modern community using the wartime base for its post-war foundation.

From 1941 to 1950, Ajax had no local municipal government of its own. In 1950, as a result of a petition, the community became the Corporation of the Improvement District of Ajax with three trustees appointed by the Lieutenant-Governor in Council. By 1953, the desire for full and active participation by its citizens in an elected council and school board was strong. The Ajax Citizens' Association, formed by many civic-minded persons, presented a brief to the Ontario Municipal Board urging that the Improvement District of Ajax become the Corporation of the Town of Ajax. The Municipal Board approved this step, and on December 13, 1954, the people elected the first Town Council and the first Public School Board.

On June 22, 1973, the Ontario Legislature enacted Bill 162 to amalgamate the Town of Ajax and the Village of Pickering and annex certain portions of the Township of Pickering to the Town of Ajax, as part of the creation of the new Durham Region; this also included the remote lakeside Town of Pickering Beach. The Region and Town both officially came into being on January 1, 1974.

Ajax is bordered to the west and north by the City of Pickering, to the east by the Town of Whitby and to the south by Lake Ontario. 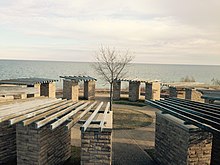 Ajax Council and a private developer entered into an agreement in 2012 for the purchase and sale of 9 acres (3.6 ha) of vacant town-owned land at the corner of Bayly Street and Harwood Avenue. Called "Pat Bayly Square", it will provide residential, retail and office space, as well as a civic square and civic facility.[5] Pat Bayly Square opened in September 2018.

The members of the elected council as of the 2018 municipal election are:[6]

Religiously speaking, 18.6% of Ajax's population does not affiliate with any religion. For those who do identify as religious, the makeup is Christian (81.9%), Muslim (8.5%), Hindu (7.3%) and the remaining 2.3% affiliate with another religion.[9]

94% of Ajax's population were Canadian citizens with 11.4% being recent immigrants (from 1991 to 2006) including 3.5% having arrived within the preceding 5 years (since 2001). Of the Ajax population 15 years of age and over, which represent 77% of Ajax's total population, 38.8% immigrated to Canada, 23.3% were born in Canada to one or both parents having been born outside of Canada, and 37.9% were born inside Canada to both parents being Canadian born (and possibly their grandparents as well).

For those aged 25 to 64 years, the highest levels of education were 64.1% with a post-secondary degree, 26.4% with a high school diploma (or equivalent) and 9.5% had no certificate, diploma or degree.

In 1945, with the closing of D.I.L., there was no industry within the town, but in 1949, Dowty Aerospace started operations in Ajax. By 1969, major employers included Volkswagen Canada, DuPont, Paintplas, Ajax Textile, AEG Bayly Engineering and many others.

Shopping was virtually non-existent in the mid-1940s, but by 1970 major shopping centres such as Ajax Plaza, Harwood Place Mall and Clover Ridge Plaza were constructed. The 1980s saw an expansion of retail shopping malls to include Discovery Bay Plaza, Transit Square, Baywood Plaza, Westney Heights Plaza and most recently the Durham Centre at Harwood Avenue and Kingston Road.

The 1970s saw the beginning of many physical changes to the face of Ajax. New subdivisions spread over vacant land in central Ajax. The early 1980s brought extensive development to the southern part of Ajax with large, upscale housing units constructed along Lake Driveway.

Ajax Downs is a casino that is located on 50 Alexander's Crossing, near the intersection of Kingston Road (Toronto) and Audley Road. It has been controversial since the announcement of the Durham Live casino in 2018. The Ontario premier Doug Ford had promised to keep the Ajax Downs open after the completion of the casino.

The Ajax and Pickering General Hospital first opened in 1954 with 38 adult and children's beds. It was expanded to 50 beds in 1958 and a major expansion to 127 beds took place in 1964. The emergency and outpatient services were expanded in 1975. The large growth of population in the Town has prompted a further expansion. Approval was granted in the fall of 1990 to further expand. In 1999, the Hospital merged with Centenary Health Centre in Scarborough to become part of the Rouge Valley Health System. Construction on a $60 million expansion began in 2007, although that has been marred by the highly controversial closure of the 3 West Mental Health ward in 2008, which was originally to be part of the expansion. 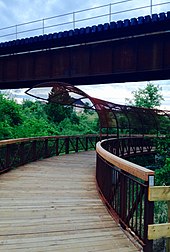 In 1973, the Town of Ajax conducted a survey of potential transit ridership in Ajax. This led to the creation of Ajax Transit with bus service beginning in 1973 under a contract with Charterways Transportation Limited, which operated service using a fleet of school buses, with heaviest ridership between the Pickering Beach area and downtown Ajax.

In the late 1970s, the town brought the operations in house and began operations on the Elm, Duffins, and Beach routes, which exist to this day. In the early 1980s, the Harwood, Westney Heights, and Village routes began service. Service on the Puckrin route began in the late 1980s.

In 2006, APTA was amalgamated into Durham Region Transit along with the other municipal transit services in Durham Region.

Road transportation in Ajax is dominated by Highway 401, which runs east–west through the town, dividing it in half. Access to Highway 401 both east and west is available via Westney Road and Salem Road. Only four streets allow transportation from the north end of town to the south end of town by crossing over or under Highway 401. These streets are (from west to east) Church Street, Westney Road, Harwood Avenue and Salem Road. Lakeridge Road crosses the highway, but it is traditionally held to be the border between the towns of Ajax and Whitby. Notable streets that run parallel to the highway are (from north to south) Taunton Road, Rossland Road, Kingston Road (Highway 2) and Bayly Street. At Salem Road is where Highway 401 narrows to three lanes each way, causing a severe traffic bottleneck eastbound during rush hours and special holidays due to increased travel to Ottawa and Montreal.

The closest international airport to Ajax is Toronto Pearson International Airport, located 50 kilometres to the west in Mississauga.

The Ajax Rock are a box lacrosse team that, as of 2009, have been promoted to the Senior "A" Major Series Lacrosse league.[16] They play during the summer months out of the Ajax Community Centre.

The town is the home of two minor leagues, the Ajax Spartans Minor Baseball Association and the Ajax Knights Minor Hockey Association.

There is also a growing rugby union club that has been established since 1949 called the Ajax Wanderers. Their clubhouse is located on 1717 Harwood Ave. N, just south of Taunton Rd.

Ajax Cricket Club is located in the community.