An airport rail link is a service providing passenger rail transport from an airport to a nearby city by mainline or commuter trains, rapid transit, people mover, or light rail. Direct links operate straight to the airport terminal, while other systems require an intermediate use of people mover or shuttle bus.

Although airport rail links have been popular solutions in Europe and Japan for decades, only recently have links been constructed in North America, Oceania, and the rest of Asia. Advantages for the rider include faster travel time and easy interconnection with other public transport, while authorities have benefited from less highway and parking congestion, less pollution, and additional business opportunities. Additionally, the links benefit airports by drawing in more passengers via easy access. 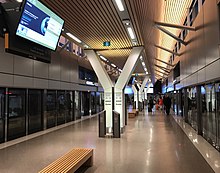 Toronto's Union Pearson Express links the city centre with the airport, but also has intermediate stations. This has made it a popular premium alternative for local commuters.

For airports built within or close to the city limits, extending mass transit urban rail systems like rapid transit or light rail to airport terminals allows full integration with other public transport in the city, and seamless transport to all parts of town. Service frequency will be high, although travel time is a drawback as the services make many intermediate stops before reaching the city center and thus there may not be enough space for the baggage commonly carried by airport-bound passengers. Furthermore, luggage stowing facilities are not commonly found on mass transit vehicles as their primary objective is to provide high-capacity transport, as in the Airport & South Line in Sydney, Australia. A common solution involves building a separate people mover from a mass transit station to the airport terminal (see below), often using automated systems, allowing faster travel time and fare discrimination, for instance Orlyval. Because they are solely dedicated to passengers using the airport, luggage stowing facilities are more likely to appear on these systems.

The first rapid transit station to connect an airport with a mass transit system was the Berlin U-Bahn's Paradestraße station which opened in 1927 as Flughafen (Airport) and was built to provide direct access to Berlin Tempelhof Airport. The connection between Tempelhof Airport and the Berlin U-Bahn at Paradestraße was however revoked in 1937 and the preceding station Platz der Luftbrücke was instead granted that connection and remained so until Tempelhof Airport's closure in 2008. Other early examples of mass transit stations located at airports include the MBTA Blue Line's Airport station which is situated at Boston's Logan International Airport and opened for service in 1952 and rebuilt in 2004, and Cleveland RTA Rapid Transit Red Line's Cleveland Hopkins International Airport station which opened in 1968 and rebuilt in 1994, although Cleveland's rapid transit is considered the first direct airport-to-downtown rapid transit system in the Western Hemisphere. Boston's Blue Line requires a short bus transfer from the airport rail station to the airport terminal. 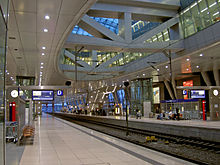 Dedicated railway lines to airports have become popular since the 1980s. In many cases, there are stations at the airport terminal(s) for express, intercity and commuter trains, allowing direct travel to the check-in halls. In most cases, this solution requires the building of new track, whether it is a newly built main line or a branch (spur) line from an existing main line.

Integration with intercity services has produced alliances where airlines sell air tickets that include the connecting rail service. Central Europe has seen integration of high-speed rail into airports, with domestic and international TGV and ICE services from Charles de Gaulle Airport in Paris and Frankfurt Airport. Because of this, many airport railway stations have received IATA codes.

Yet another option for airports is to use a high-speed "airport express" train to the city centre, especially if the airport is outside the urban area and some way from the mass transit system, but a direct downtown service is required, such as Flytoget serving Oslo Airport, Gardermoen. There are various ways this can be done: it may operate on a combination of existing and newly built mainline rail or mass transit track using a dedicated fleet of rolling stock designed for airport service. These solutions often have the drawback of lower frequencies (e.g. twice per hour), and often charge a premium fare higher than other services, but are more likely to have luxury features such as luggage racks, power outlets, Wifi, and washrooms.

Most dedicated railways use mainline trains and trackage, while mass transit "airport express" lines are usually found in Asia, as in the case of the Airport Express Line in Hong Kong. Other airports, such as Heathrow Airport, are served by both express trains and mass transit.

In many cases, there is no train station directly at the airport, usually because the infrastructure on which the service operates makes it impractical to build such a station. When this happens, a shuttle system is required for the last part of the journey; using either a people mover (often automated, such as AirTrain JFK in New York City) or a bus. The former allows low operating costs[citation needed] and higher perceived quality; the latter does not require specialized infrastructure to be built, and is often the preferred choice at smaller or low-cost airports. Shuttles do not provide a direct connection, and often involve a wait for a transfer to the next stage of the journey. Thus their market shares are often lower.

In some airports, such as San Francisco International Airport, the rail link may not serve some or all of the terminals or concourses directly; passengers using terminals that lack such connections must use a people mover or airport circulator to access their terminal. These circulators typically also serve parking lots, and sometimes airport hotels and off-site car rental locations.

Commuter rail-type service directly from a city centre to the airport, without needing to change trains and sometimes without intermediate stops. 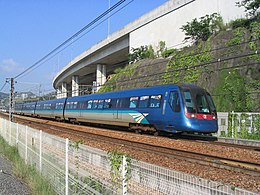 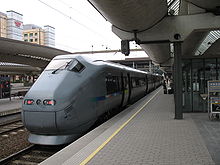 Many cities also provide a link to their airports through their rapid transit or light rail systems, which, unlike express trains, often make numerous stops on the way to the airport. At some airports, such as O'Hare in Chicago or Hartsfield-Jackson in Atlanta, the rapid transit train only visits one terminal or concourse; passengers must transfer to an airport circulator (people mover system) to reach other terminals or concourses. 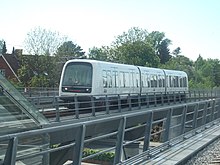 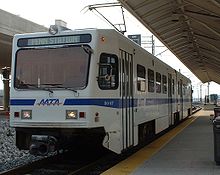 A hybrid solution adopted in some cities is a direct rail connection to an airport train station instead of to the airport itself. At the airport train station, the passenger switches to a people mover or other train that goes to the airport terminals. The same system can also serve passengers moving between different terminals and traveling between the terminals and car rental lots or parking areas. Several very large airports have rail stations near some terminals, but people movers are used by many to get to some other terminals. Examples: Paris Charles de Gaulle and Oakland.

Rail to bus to airport