ISBN (identifier) John F. Kennedy International Airport Enlarge
Airport that an airline uses as a transfer point to get passengers to their intended destination 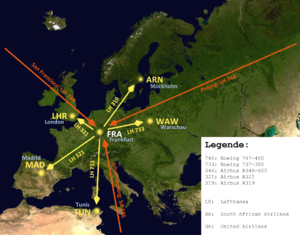 Airline hubs or hub airports are used by one or more airlines to concentrate passenger traffic and flight operations at a given airport. They serve as transfer (or stop-over) points to get passengers to their final destination.[a][b] It is part of the hub-and-spoke system. An airline operates flights from several non-hub (spoke) cities to the hub airport, and passengers traveling between spoke cities need to connect through the hub. This paradigm creates economies of scale that allow an airline to serve (via an intermediate connection) city-pairs that could otherwise not be economically served on a non-stop basis. This system contrasts with the point-to-point model, in which there are no hubs and nonstop flights are instead offered between spoke cities. Hub airports also serve origin and destination (O&D) traffic.

The primary hub of British Airways is Heathrow Airport in London

The hub-and-spoke system allows an airline to serve fewer routes, so fewer aircraft are needed.[3] The system also increases passenger loads; a flight from a hub to a spoke carries not just passengers originating at the hub, but also passengers originating at multiple spoke cities.[4] However, the system is costly. Additional employees and facilities are needed to cater to connecting passengers. To serve spoke cities of varying populations and demand, an airline requires several aircraft types, and specific training and equipment are necessary for each type.[3] In addition, airlines may experience capacity constraints as they expand at their hub airports.[4][5]

For the passenger, the hub-and-spoke system offers one-stop air service to a wide array of destinations.[3][6] However, it requires having to regularly make connections en route to their final destination, which increases travel time.[6] Additionally, airlines can come to monopolise their hubs (fortress hubs), allowing them to freely increase fares as passengers have no alternative.[4]

Airlines may operate banks of flights at their hubs, in which several flights arrive and depart within short periods of time. The banks may be known as "peaks" of activity at the hubs and the non-banks as "valleys". Banking allows for short connection times for passengers.[7] However, an airline must assemble many resources to cater to the influx of flights during a bank, and having several aircraft on the ground at the same time can lead to congestion and delays.[8] In addition, banking could result in inefficient aircraft utilisation, with aircraft waiting at spoke cities for the next bank.[8][9]

Instead, some airlines have debanked their hubs, introducing a "rolling hub" in which flight arrivals and departures are spread throughout the day. This phenomenon is also known as "depeaking".[9] While costs may decrease, connection times are longer at a rolling hub.[8] American Airlines was the first to depeak its hubs,[8] trying to improve profitability following the September 11 attacks.[7] It rebanked its hubs in 2015, however, feeling the gain in connecting passengers would outweigh the rise in costs.[7]

Before the US airline industry was deregulated in 1978, most airlines operated under the point-to-point system (with a notable exception being Pan Am).[4] The Civil Aeronautics Board dictated which routes an airline could fly. At the same time, however, some airlines began to experiment with the hub-and-spoke system. Delta Air Lines was the first to implement such a system, providing service to remote spoke cities from its Atlanta hub.[6] After deregulation, many airlines quickly established hub-and-spoke route networks of their own.[3]

In 1974, the governments of Bahrain, Oman, Qatar and the United Arab Emirates took control of Gulf Air from the British Overseas Airways Corporation (BOAC). Gulf Air became the flag carrier of the four Middle Eastern nations. It linked Oman, Qatar and the UAE to its Bahrain hub, from which it offered flights to destinations throughout Europe and Asia. In the UAE, Gulf Air focused on Abu Dhabi rather than Dubai, contrary to the aspirations of UAE Prime Minister Mohammed bin Rashid Al Maktoum to transform the latter into a world-class metropolis. Sheikh Mohammed proceeded to establish a new airline based in Dubai, Emirates, which launched operations in 1985.[14]

Elsewhere in the Middle East region, Qatar and Oman decided to create their own airlines as well. Qatar Airways and Oman Air were both founded in 1993, with hubs at Doha and Muscat respectively. As the new airlines grew, their home nations relied less on Gulf Air to provide air service. Qatar withdrew its share in Gulf Air in 2002. In 2003, the UAE formed another national airline, Etihad Airways, which is based in Abu Dhabi. The country exited Gulf Air in 2006, and Oman followed in 2007.[14]

Emirates, Qatar Airways and Etihad Airways have since established large hubs at their respective home airports. The hubs, which benefit from their proximity to large population centres,[14] have become popular stopover points on trips between Europe and Asia, for example.[15] Their rapid growth has impacted the development of traditional hubs, such as London, Paris, and New York City.[16]

The hub-and-spoke system is also used by some cargo airlines. FedEx Express established its main hub in Memphis in 1973, prior to the deregulation of the air cargo industry in the United States. The system has created an efficient delivery system for the airline.[17] Other airlines that use this system include UPS Airlines, TNT Airways, Cargolux and DHL Aviation, which operate their primary hubs at Louisville, Liège, Luxembourg and Leipzig respectively.[18] 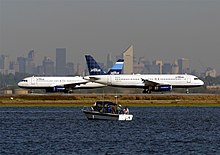 In the airline industry, a focus city is a destination from which an airline operates limited point-to-point routes.[20] Ergo, a focus city primarily caters to the local market rather than to connecting passengers.[21][22]

Although the term focus city is used to mainly refer to an airport from which an airline operates limited point-to-point routes, its usage has loosely expanded to refer to a small-scale hub as well.[23] For example, JetBlue's New York–JFK focus city runs like a hub, although in reality it is still deemed by JetBlue as a focus city.[8]

A fortress hub exists when an airline controls a significant majority of the market at one of its hubs. Competition is particularly difficult at fortress hubs.[24] Examples include Delta Air Lines at Atlanta, American Airlines at Dallas/Fort Worth and United Airlines at Houston–Intercontinental.[25]

Flag carriers have historically enjoyed similar dominance at the main international airport of their countries and some still do. Examples include Air Canada at Toronto–Pearson, Air France at Paris–Charles de Gaulle, British Airways at London–Heathrow, Korean Air at Seoul–Incheon, Lufthansa at Frankfurt, Qantas at Sydney Kingsford Smith and South African Airways at Johannesburg.

A primary hub is the main hub for an airline. However, as an airline expands operations at its primary hub to the point that it experiences capacity limitations, it may elect to open secondary hubs. Examples of such hubs are British Airways' hub at London–Gatwick, Air India's hub at Mumbai and Lufthansa's hub at Munich. By operating multiple hubs, airlines can expand their geographic reach.[26] They can also better serve spoke–spoke markets, providing more itineraries with connections at different hubs.[1]

A given hub's capacity may become exhausted or capacity shortages may occur during peak periods of the day, at which point airlines may be compelled to shift traffic to a reliever hub. A reliever hub has the potential to serve several functions for an airline: it can bypass the congested hub, it can absorb excess demand for flights that could otherwise not be scheduled at the congested hub, and it can schedule new O&D city pairs for connecting traffic.

One of the most recognized examples of this model is Delta Air Lines's use of LaGuardia Airport as a domestic hub in New York City, due to capacity and slot restrictions at its hub at John F. Kennedy International Airport. Many regional flights operate out of LaGuardia, while most international flights remain at JFK.

A scissor hub occurs when an airline operates multiple flights to an airport that arrive at the same time, swap passengers, and then continue to their final destination.[27] Air India operates a similar scissor hub at London's Heathrow Airport, where passengers from Delhi, Ahmedabad, and Mumbai can continue onto a flight to Newark.[28] An international scissor hub could be used for third and fourth freedom flights or it could be used for fifth freedom flights, for which a precursor is a bilateral treaty between two country pairs.

WestJet uses St. John's as a scissor hub during its summer schedule for flights inbound from Ottawa, Toronto, and Orlando and outbound to Dublin and London–Gatwick. At Los Angeles International Airport, Qantas passengers from Melbourne, Brisbane or Sydney may transfer onto a flight to New York–JFK and vice versa.

In past history, carriers have maintained niche, time-of-day operations at hubs. The most notable is America West's use of McCarran International Airport in Las Vegas as a primary night-flight hub to increase aircraft utilization rates far beyond those of competing carriers.