Air Kazakhstan[1] was an airline of Kazakhstan which later became its national carrier after bankrupt Kazakhstan Airlines was shut down. It was headquartered in Almaty.[2]

The airline was established in 1991 as Kazakhstan Airways but changed to Air Kazakhstan on 10 March 1997 (spelled as "Air Kazakstan" until 2001). It ceased operations on 29 February 2004, after accumulating heavy debts, and was declared bankrupt in April 2004 by the court in Almaty.

When it shut down, Air Kazakhstan was serving the following locations: 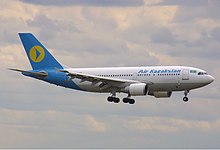