The Expo 2005 World Exposition was held in Seto and Nagakute.

In the third volume of the Man'yōshū there is a poem by Takechi Kurohito that reads: "The cry of the crane, calling to Sakurada; it sounds like the tide, draining from Ayuchi flats, hearing the crane cry". Ayuchi is the original form of the name Aichi, and the Fujimae tidal flat is all that remains of the earlier Ayuchi-gata. It is now a protected area.[4][5]

For a time, an Aichi Station existed on the Kansai Line (at the time the Kansai Railway) between Nagoya and Hatta stations, but its role was overtaken by Sasashima-raibu Station on the Aonami Line and Komeno Station on the Kintetsu Nagoya Line. 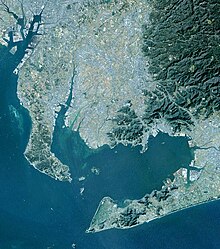 Located near the center of the Japanese main island of Honshu, Aichi Prefecture faces the Ise and Mikawa Bays to the south and borders Shizuoka Prefecture to the east, Nagano Prefecture to the northeast, Gifu Prefecture to the north, and Mie Prefecture to the west. It measures 106 km (66 mi) east to west and 94 km (58 mi) south to north and forms a major portion of the Nōbi Plain. With an area of 5,172.48 km2 it accounts for approximately 1.36% of the total surface area of Japan. The highest spot is Chausuyama at 1,415 m (4,642 ft) above sea level.

The western part of the prefecture is dominated by Nagoya, Japan's third largest city, and its suburbs, while the eastern part is less densely populated but still contains several major industrial centers. Due to its robust economy, for the period from October 2005 to October 2006, Aichi was the fastest growing prefecture in terms of population, beating Tokyo, at 7.4%.

As of April 1, 2012, 17% of the total land area of the prefecture was designated as Natural Parks, namely the Aichi Kōgen, Hida-Kisogawa, Mikawa Wan, and Tenryū-Okumikawa Quasi-National Parks along with seven Prefectural Natural Parks.[6]

See also: List of cities in Aichi Prefecture by population

Companies headquartered in Aichi include the following. 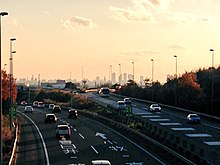 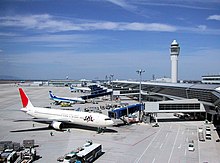 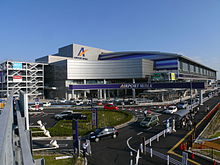 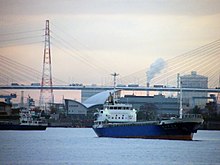 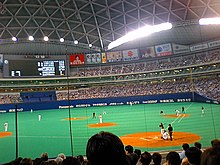 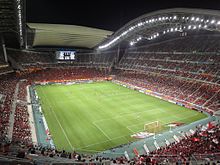 The sports teams listed below are based in Aichi. 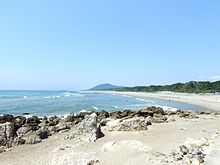 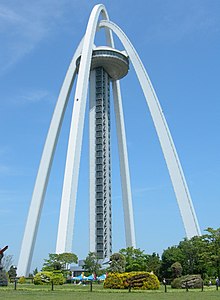 Notable sites in Aichi include the Meiji Mura open-air architectural museum in Inuyama, which preserves historic buildings from Japan's Meiji and Taishō periods, including the reconstructed lobby of Frank Lloyd Wright's old Imperial Hotel (which originally stood in Tokyo from 1923 to 1967).

Other popular sites in Aichi include the tour of the Toyota car factory in the city by the same name, the monkey park in Inuyama, and the castles in Nagoya, Okazaki, Toyohashi, and Inuyama.