Ahuntsic-Cartierville is located in the north end of Montreal, on the banks of the Rivière des Prairies. It traces its history to the fortified Sault-au-Récollet settlement, which was established by the Sulpicians in 1696. This in turn led to the colonization of the area.[5] 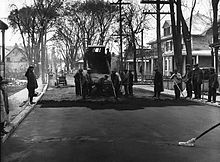 Workers spreading asphalt in Sault-au-Récollet about 1930.

One of the oldest villages on the island of Montreal, Sault-au-Récollet still retains its village atmosphere with many houses dating from the 18th and 19th centuries. It was the original site of Fort Lorette, a trading post and mission for the conversion of the First Nations people of the area.

It grew prosperous in the 18th century with the construction of a mill on the rapids on the Rivière des Prairies (from which the village derives its name: Sault-au-Récollet, or Recollet Falls). A dam was built on the narrow arm of the river that passes between the village and Visitation Island, which splits the river in two at that point. A museum and cultural centre, the Maison du Pressoir, perpetuates this memory. A hydroelectric dam was built later and still exists further down the river. 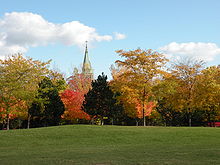 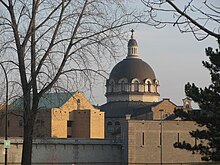 Cartierville grew as a suburb when it became in 1898 the north terminus of the Montreal Park and Island Railway tramway line, also known as the "17-Cartierville". Named in the honor of Sir George-Étienne Cartier, it became a village officially in 1906. During December 1912, it achieved city status. Two years later, the rural and agricultural part of Cartierville was granted independence from the city and was then known as Ville de Saraguay.

On 22 December 1916, the provincial government ordered the annexation of Cartierville to Montreal. The district was famous for the Belmont Park amusement park which operated from 1929 to the 1980s.

New Bordeaux (or simply Bordeaux) was originally part of the independent village of Cartierville until it became its own municipality in 1898. The district was originally named Saint-Joseph de Bordeaux until 1906. One year later, Bordeaux attained city status. On June 4, 1910, it was annexed by the larger City of Montreal. The district was home to Maurice Richard, writer Claude Jasmin and Comte Daeylar.

The municipality of the Village of Ahuntsic was founded on January 21, 1897, by a proclamation of the Quebec provincial government. The council of the new village operated until 1910, when the province passed laws creating the charter of the City of Montreal. It was then annexed and later combined with Nouveau-Bordeaux, forming the district of Ahuntsic-Bordeaux. The city of Cartierville and Sault-au-Récollet were added in 1918.

In 1952, following a land exchange, Ahuntsic took over part of Saint-Laurent. The Ahuntsic-Cartierville borough was part of the City of Montreal prior to January 1, 2002. For further reading on pre-merger Montreal, see Karen Herland's book "People, Potholes and Politics".

In 1914, the rural and agricultural part of the city of Cartierville became independent, forming its own city. It was only in 1964, that Saraguay joined itself to the City of Montreal under law 2926 approved by the lieutenant-governor of the province of Quebec.

The borough's office is located at 555, rue Chabanel West, Montreal. The territory is divided into four districts.

The English Montreal School Board (EMSB) is in charge of English-language elementary and secondary schools in the borough of Ahuntsic-Cartierville. EMSB elementary schools include: John Caboto, Cedarcrest, Parkdale and Our Lady of Pompei. 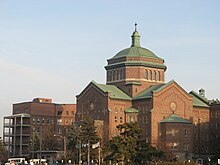 Ahuntsic-Cartierville features large parks along its riverside, such as Île Perry[6] and Parc de l'Île de la Visitation, which offer views of the river and of nearby Laval, Quebec. Ahuntsic Park and Marcelin-Wilson Park are the borough's main parks, which both have playgrounds, skate parks, and arenas housing ice skating rinks. Ahuntsic Park has a dog park, a community garden, water playground and large open-space field for outdoor seasonal events while Marcelin-Wilson Park has a swimming pool, tennis courts and soccer fields. The borough is also traversed by the Route Verte, a province-wide network of bicycle paths. The Complexe sportif Claude-Robillard, located at 1000 Émile-Journault Avenue, is one of the main sport complexes in the city. The Cartierville area to the west was formerly the home of the Belmont Park amusement park.