Agave (/əˈɡɑːvi/, UK also /əˈɡeɪvi/,[1] Anglo-Hispanic: /əˈɡɑːveɪ/)[2] is a genus of monocots native to the hot and arid regions of the Americas, although some Agave species are also native to tropical areas of South America. The genus Agave (from the Ancient Greek αγαυή, agauê)[3] is primarily known for its succulent and xerophytic species that typically form large rosettes of strong, fleshy leaves.[4] Plants in this genus may be considered perennial, because they require several to many years to mature and flower.[5][page needed][6] However, most Agave species are more accurately described as monocarpic rosettes or multiannuals, since each individual rosette flowers only once and then dies (see semelparity); a small number of Agave species are polycarpic.[5][page needed][6]

Along with plants from the closely related genera Yucca, Hesperoyucca, and Hesperaloe, various Agave species are popular ornamental plants in hot, dry climates, as they require very little supplemental water to survive.[6] Most Agave species grow very slowly.[4] Some Agave species are known by the common name "century plant".[7]

The succulent leaves of most Agave species have sharp marginal teeth, an extremely sharp terminal spine, and are very fibrous inside.[6] The stout stem is usually extremely short, which may make the plant appear as though it is stemless.

Agave rosettes are mostly monocarpic, though some species are polycarpic.[5][page needed] During flowering, a tall stem or "mast" ("quiote" in Mexico), which can grow to be 40 feet (12 m) high,[8] grows apically from the center of the rosette and bears a large number of short, tubular flowers and sometimes vegetatively produced bulbils (a form of asexual reproduction). After pollination/fertilization and subsequent fruit development, in monocarpic species, the original rosette dies. However, throughout the lifetime of many Agave species, rhizomatous suckers develop above the roots at the base of the rosette.[5][page needed] These suckers go on to form new plants after the original rosette desiccates and dies.[5][page needed] Not all agaves produce suckers throughout their lifetimes; some species rarely or never produce suckers, while others may only develop suckers after final maturation with inflorescence.[5][page needed] Some varieties can live for 60 years before flowering.[9]

Agaves can be confused with cacti, aloes, or stonecrops, but although these plants all share similar morphological adaptations to arid environments (e.g. succulence), each group belongs to a different plant family and probably experienced convergent evolution.[10] Further, cactus (Cactaceae) and stonecrop (Crassulaceae) lineages are eudicots, while aloes (Asphodelaceae) and agaves (Asparagaceae) are monocots.

Agave species are used as food plants by the larvae of some Lepidoptera (butterfly and moth) species, including Batrachedra striolata, which has been recorded on A. shawii.

The agave root system, consisting of a network of shallow rhizomes, allows the agave to efficiently capture moisture from rain, condensation, and dew. In addition to growing from seeds, most agaves produce 'pups' – young plants from runners. Agave vilmoriniana (the octopus agave) produces hundreds of pups on its bloom stalk. Agave leaves store the plant's water and are crucial to its continued existence. The coated leaf surface prevents evaporation. The leaves also have sharp, spiked edges. The spikes discourage predators from eating the plant or using it as a source of water and are so tough that ancient peoples used them for sewing needles. The sap is acidic. Some agaves bloom at a height up to 30 ft (9 m) so that they are far out of reach to animals that might attack them. Smaller species, such as Agave lechuguilla, have smaller bloom stalks.

In the APG III system, the genus Agave is placed in the subfamily Agavoideae of the broadly circumscribed family Asparagaceae.[11] Some authors prefer to place it in the segregated family Agavaceae. According to the most recent phylogenetic analyses, the genus Agave is shown to be paraphyletic with the embedded genera Manfreda, Polianthes, and Prochnyanthes. These genera are now combined with Agave to form the group described as Agave sensu lato, which contains about 252 species total. Traditionally, the genus Agave was circumscribed to be composed of about 166 species.[12]

In the Cronquist system and others, Agave was placed in the family Liliaceae, but phylogenetic analyses of DNA sequences later showed it did not belong there.[13] In the APG II system, Agave was placed in the family Agavaceae. When this system was superseded by the APG III system in 2009, the Agavaceae were subsumed into the expanded family Asparagaceae, and Agave was treated as one of 18 genera in the subfamily Agavoideae.[11] In some of the older classifications, Agave was divided into two subgenera, Agave and Littaea, based on the form of the inflorescence. These two subgenera are probably not monophyletic.[13]

Agaves and close relatives have long presented significant difficulties to the biological field of taxonomy. These difficulties could be due to the relatively young evolutionary age of the group (major diversification events of the group most likely occurred 8-10 million years ago), ease of hybridization between species (and even genera), incomplete lineage sorting, and long generation times.[14] Within a species, morphological variations can be considerable, especially in cultivation; a number of named species may actually just be variants of original wild-type species that horticulturalists bred to appear unique in cultivation. 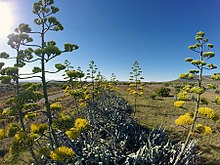 A row of agaves in bloom in the Karoo region of South Africa: The inflorescences of the plants are clearly visible.

One of the most familiar species is A. americana, a native of tropical America. Common names include century plant, maguey (in Mexico), or American aloe (though not related to the genus Aloe). The name "century plant" refers to the long time the plant takes to flower. The number of years before flowering occurs depends on the vigor of the individual plant, the richness of the soil, and the climate; during these years, the plant is storing in its fleshy leaves the nourishment required for the effort of flowering.

A. americana, century plant, was introduced into southern Europe about the middle of the 16th century, and is now widely cultivated as an ornamental, as it is in the Americas. In the variegated forms, the leaf has a white or yellow marginal or central stripe. As the leaves unfold from the center of the rosette, the impression of the marginal spines is conspicuous on the still erect younger leaves. The plant is reported being hardy to -9.5 to -6.5°C or Zone 8b 15-20f.[15][16] Being succulents, they tend to rot if kept too wet. In areas such as America's Pacific Northwest, they might be hardy for cold winter temperatures, but need protection from winter rain. They mature very slowly and die after flowering, but are easily propagated by the offsets from the base of the stem.

A. americana (a blue variety) occurs in abundance in the Karoo, and arid highland regions of South Africa. Introduced by the British settlers in 1820, the plant was originally cultivated and used as emergency feed for livestock.[17] Today, it is used mainly for the production of syrup and sugar.

A. attenuata is a native of central Mexico and is uncommon in its natural habitat. Unlike most species of agave, A. attenuata has a curved flower spike from which it derives one of its numerous common names - the foxtail agave. It is also commonly grown as a garden plant. Unlike many agaves, A. attenuata has no teeth or terminal spines, making it an ideal plant for areas adjacent to footpaths. Like all agaves, it is a succulent and requires little water or maintenance once established.

Agave azul (blue agave) is used in the production of tequila. In 2001, the Mexican government and European Union agreed upon the classification of tequila and its categories. All 100% blue agave tequila must be made from the A. tequilana 'Weber's Blue' agave plant, to rigorous specifications and only in certain Mexican states.[citation needed]

The ethnobotany of the agave was described by William H. Prescott in 1843:[18]

But the miracle of nature was the great Mexican aloe, or maguey, whose clustering pyramids of flowers, towering above their dark coronals of leaves, were seen sprinkled over many a broad acre of the table-land. As we have already noticed its bruised leaves afforded a paste from which paper was manufactured, its juice was fermented into an intoxicating beverage, pulque, of which the natives, to this day, are extremely fond; its leaves further supplied an impenetrable thatch for the more humble dwellings; thread, of which coarse stuffs were made, and strong cords, were drawn from its tough and twisted fibers; pins and needles were made from the thorns at the extremity of its leaves; and the root, when properly cooked, was converted into a palatable and nutritious food. The agave, in short, was meat, drink, clothing, and writing materials for the Aztec! Surely, never did Nature enclose in so compact a form so many of the elements of human comfort and civilization!

The four major edible parts of the agave are the flowers, the leaves, the stalks or basal rosettes, and the sap (in Spanish: aguamiel, meaning "honey water").[19]

Each agave plant produces several pounds of edible flowers during its final season. The stalks, which are ready during the summer, before the blossom, weigh several pounds each. Roasted, they are sweet and can be chewed to extract the aguamiel, like sugarcane. When dried out, the stalks can be used to make didgeridoos. The leaves may be collected in winter and spring, when the plants are rich in sap, for eating. The leaves of several species also yield fiber, for instance, Agave sisalana, the sisal hemp, and Agave decipiens, the false sisal hemp. Agave Americana is the source of pita fiber, and is used as a fiber plant in Mexico, the West Indies, and southern Europe.

The agave, especially Agave murpheyi, was a major food source for the prehistoric indigenous people of the Southwestern United States. The Hohokam of southern Arizona cultivated large areas of agave.[20]

The Navajo similarly found many uses for the agave plant. A beverage is squeezed from the baked fibers, and the heads can be baked or boiled, pounded into flat sheets, sun dried, and stored for future use. The baked, dried heads are also boiled and made into an edible paste, eaten whole, or made into soup. The leaves are eaten boiled, and the young, tender flowering stalks and shoots are roasted and eaten as well. The fibers are used to make rope, the leaves are used to line baking pits, and the sharp-pointed leaf tips are used to make basketry awls.[21]

During the development of the inflorescence, sap rushes to the base of the young flower stalk. Agave syrup (commonly called agave nectar), a sweetener derived from the sap, is used as an alternative to sugar in cooking, and can be added to breakfast cereals as a binding agent.[22] The agave sweetener is marketed as natural and diabetic-friendly, without spiking blood sugar levels.[23] However, extracts from agave leaves are under preliminary research for their potential use as food additives.[24]

The sap of A. americana and other species is used in Mexico and Mesoamerica to produce pulque, an alcoholic beverage. The flower shoot is cut out and the sap collected and subsequently fermented. By distillation, a spirit called mezcal is prepared; one of the best-known forms of mezcal is tequila. Agave tequilana or Agave tequilana var. azul is used in the production of tequila.[25] Agave angustifolia is widely used in the production of mezcal and pulque, though at least 10 other Agave species are also known to be used for this.[25]

Agave can be used as the raw material for industrial production of fructans as a prebiotic dietary fiber.[24][26] Resulting from its natural habitat in stressful environments, agave is under preliminary research for its potential use in germplasm conservation and in biotechnology to better anticipate the economic effects of global climate change.[27] It may also have use as a bioethanol or bioenergy feedstock.[28][29]

Images of species and cultivars