The Aga Khan Award for Architecture (AKAA) is an architectural prize established by Aga Khan IV in 1977. It aims to identify and reward architectural concepts that successfully address the needs and aspirations of Muslim societies in the fields of contemporary design, social housing, community development and improvement, restoration, reuse and area conservation, as well as landscape design and improvement of the environment.[1]

The award is associated with the Aga Khan Trust for Culture (AKTC), an agency of the Aga Khan Development Network (AKDN).

The Aga Khan Award for Architecture is presented in three-year cycles and has a monetary prize totalling US$1 million that is shared by multiple winning projects.[2] It recognizes projects, teams, and stakeholders in addition to buildings and people.[3]

The Chairman's Award is given in honour of accomplishments that fall outside the mandate of the Master Jury. It recognises lifetime achievements of individuals and has been presented four times: in 1980 to Egyptian architect and urban planner Hassan Fathy,[4] in 1986 to Iraqi architect and educator Rifat Chadirji,[5] in 2001 to Sri Lankan architect Geoffrey Bawa,[6] and in 2010 to historian of Islamic art and architecture Oleg Grabar.[7]

Prince Karim Aga Khan IV established the Aga Khan Award for Architecture in 1977.[8] At the time, very few architectural prizes of international scope existed.[9] It has been noted that the award emerged from "the Aga Khan's sadness at the state of architecture in the Islamic world of the 1970s",[10] and his conviction of the importance that the built environment holds in shaping a society's quality of life.[11]

Twenty years earlier, upon inheriting the seat of Imamat of the Shia Ismaili Muslims, the Aga Khan had become responsible for the wellbeing of the Ismaili community, which mostly live in the developing countries of Asia, Africa and the Middle East.[12] He was concerned at the absence of design thinking that could respond to specific challenges in those parts of the world.[12]

A relentless push for development had led to cheap copies of foreign architectural designs that held no connection or respect for the places where they were being built.[13] The Aga Khan also worried about the rapid disappearance of centuries of distinctive architectural tradition that embodied a continuity of Islamic values,[10][13] resulting in an absence of "architecture that could speak to and about the Muslim world".[14]

These problems were most acutely felt during the planning of the Aga Khan University and teaching hospital in Karachi.[14] Questions raised in this process – including the need for a contemporary visual language for the Islamic built environment, as well as for architects trained in modern technologies and sensitive to the diversity, values and dignity of Muslim culture – would inform the creation of the Award.[13]

By the 1970s, the decline of the built environment of Muslim societies and loss of cultural identity had become apparent to others as well.[13][15] From the outset the Aga Khan recruited a number of people to help define the award.[14] Among the first were Oleg Grabar a professor at the Harvard Department of Fine Arts,[16] William Porter then Dean of the MIT School of Architecture and Planning,[17] architectural historian Renata Holod, and Pakistani architect Hasan Udhin Khan.[14] They were joined by others, including Nader Ardalan, Hugh Casson, Charles Correa, and Hassan Fathy.[14]

Members of the team travelled widely – from Morocco to Indonesia.[14] They debated the cultural role of architecture, the parameters of the award and how to structure its processes.[14] The award was shaped by consultations held with chambers of architects and ministries of urbanism and culture. The first Aga Khan Award for Architecture Seminar was held during April 1978 in Aiglemont, Gouvieux, France.[18] Subsequent seminars have been held in Istanbul, Jakarta, Fez, Amman, Beijing, Dakar, Sana'a, Cairo, Granada and elsewhere.[19]

In seeking to define what "Islamic architecture" meant,[13][14] it became apparent that no singular definition was to be found.[13] Instead, the seminars brought to light the diversity of what constituted Islamic architecture.[18] This was recognized as a strength and a dormant source of creativity that the Award would seek to revive.[13]

Unlike conventional prizes that applaud the accomplishments of individual architects, the Aga Khan Award selects projects that improve the quality of life and recognizes all those who have a role in realizing them.[15] This includes clients, builders, artisans and decision makers.[20] Architecture is viewed as a collaborative endeavour in which architects play a role.[11]

In the four decades since its establishment, the Award has documented more than 9,000 projects[20] and actively contributed to the architectural discourse.[21][11][15] It has promoted the view that architecture is deeply connected with society and can respond to issues that are of local, national and even international relevance.[15]

The Award has brought together practitioners from different geographies and fields like philosophy, social sciences, and the arts,[15] who have served as jurors, steering committee members, technical reviewers, or attended seminars.[15]

The Aga Khan Award runs in three-year cycles and is governed by a steering committee chaired by the Aga Khan.[22] A new committee is constituted each cycle to establish the eligibility criteria for projects, provide thematic direction with reference to current concerns, and to develop plans for the long-term future of the award. The committee is also responsible for seminars and field visits, the award ceremony, publications and exhibitions. At the commencement of each cycle, the steering committee is convened to select a master jury[14] that is diverse in its perspectives and has in past cycles included sociologists, philosophers, artists as well as architects.[23]

In each cycle, submissions are received from a global network of approximately 500 nominators – women and men who live in Muslim societies and whose identities are kept anonymous throughout the award process.[15] Independent nominations are also accepted in accordance with the award's published guidelines and procedures.[15] Several hundred submissions are typically received in each cycle,[15] and the master jury narrows the field to a short-list.[24]

Professional, technical reviewers visit the short-listed projects to understand the living impact of each one on people and the surrounding area. They prepare exhaustive documentation, providing fact-based analysis for the master jury's consideration.[25]

Over the decades, many notable figures have served on the award's steering committees and master juries, including Homi K. Bhabha, Frank Gehry, Zaha Hadid, Glenn Lowry, Fumihiko Maki, Jacques Herzog, Ricardo Legoretta and Farshid Moussavi.[14][26] The award is administered from Geneva as part of the Aga Khan Trust for Culture, and Farrokh Derakhshani has served as Director of the Award since 1982.[27]

The Aga Khan Foundation funded the television series Architects on the Frontline which was about entries to the competition. The media watchdog Ofcom criticised BBC World News for breaking United Kingdom broadcasting rules with the series, which praised the competition; viewers were not informed that it was sponsored content.[28]

Prizes totalling up to US$1m[1] are presented every three years to projects selected by the Master Jury.[22] Since 1977, documentation has been compiled on over 7500 building projects located throughout the world, of which over 100 projects have received awards.[29]

The 1980 award ceremony took place at the Shalimar Gardens in Lahore, Pakistan. During this cycle, the Chairman's Award was given to Hassan Fathy in recognition of his lifelong commitment to architecture in the Muslim world. Prominent architect Muzharul Islam was a member of the Master Jury of the first Aga Khan Award for Architecture.

The 1983 award ceremony took place at the Topkapı Palace in Istanbul. Award recipients:[31]

The 1986 award ceremony took place at El Badi Palace in Marrakesh, Morocco. The brief prepared by the Steering Committee for this award cycle focused on the preservation and continuation of cultural heritage, community building and social housing, and excellence in contemporary architectural expression.

Six winners were chosen from among 213 entries.[32] The conservation of Mostar Old Town and restoration of Al-Aqsa Mosque were examples of cultural heritage, the first theme, while the Yama Mosque and Bhong Mosque were noted for their innovation in translating traditional techniques and materials to meet contemporary requirements. The Social Security Complex and Dar Lamane Housing address the issues of community and social housing while remaining sensitive to local culture. The Chairman's Award for Lifetime Achievements was given to Iraqi architect Rifat Chadirji. 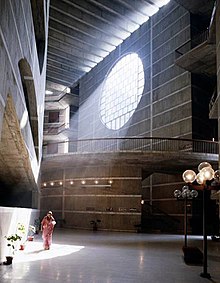 The 1989 award ceremony took place at the Citadel of Salah Ed-Din in Cairo. The fourth cycle of the award considered 241 project nominations. Of these, 32 were short-listed for technical review[35] and the Master Jury selected 11 winners. Two themes were noted as areas of focus in this cycle: Revival of past vernacular traditions, and projects that reflect the efforts of individual patrons and of non-governmental organisations in improving society.

Projects such as the Great Omari Mosque and the Rehabilitation of Asilah seek to reconstruct and preserve heritage buildings for continued use, demonstrating the significance of these spaces within their communities. Meanwhile, the Grameen Bank Housing Programme and Sidi el-Aloui Primary School apply architectural solutions to address current socioeconomic issues.

The 1995 award ceremony took place at the Kraton Surakarta in Surakarta, Indonesia.

The 1998 award ceremony took place at the Alhambra in Granada, Spain. The Master Jury selected seven winning projects of the 424 presented. During this cycle, special emphasis was placed on projects that responded creatively to the emerging forces of globalization. Issues such as demographic pressure, environmental degradation, and the crisis of the nation-state, and the changes in lifestyle, cultural values, and relationships among social groups and between governments and people at large they prompted, were considered.

Of the winning projects, the rehabilitation of the Old City of Hebron and Slum Networking of Indore City sought to reclaim community space in environments strained by social, physical and environmental degradation. The Lepers Hospital created a sustainable and dignified shelter for a marginalized segment of society. The remaining projects were recognized for their contribution in evolving an architectural vocabulary in response to contemporary social and environmental challenges.[40]

The 2001 Award Presentation Ceremony took place at the Citadel of Aleppo in Syria. During this cycle, the Chairman's Award was given to Geoffrey Bawa to honour and celebrate his lifetime achievements in and contribution to the field of architecture. 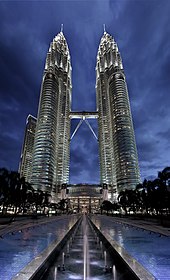 The 2004 award ceremony took place at the Humayun's Tomb in New Delhi, India. During the ninth cycle, 378 projects were nominated. Of these, 23 were site-reviewed, and the Master Jury selected seven award recipients.[44] Notable among the recipients are the Sandbag Shelter Prototypes, developed by Nader Khalili to enable victims of natural disasters and war to build their own shelter using earth-filled sandbags and barbed wire. The resulting structures – made up of arches, domes and vaulted spaces built using superadobe techniques – provide earthquake resistance, shelter from hurricanes and flood resistance, while being aesthetically pleasing.[45]

Other winning projects include a primary school in Gando, Burkina Faso, that combines high-caliber architectural design with local materials, techniques and community participation. The Bibliotheca Alexandria in Egypt and the Petronas Towers in Malaysia are examples of high-profile landmark buildings.

The 2007 Award Presentation Ceremony was held at the Petronas Towers in Kuala Lumpur, Malaysia. This cycle marked the 30th anniversary of the award. A total of 343 projects were presented for consideration, and 27 were reviewed on site by international experts.[48]

The award recipients were:[49] 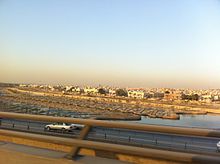 The 2010 Award Presentation Ceremony was held at the Museum of Islamic Art, Doha. A total of 401 projects were nominated of which 19 were shortlisted.[50]

The award recipients were:[51]

A total of 348 projects from 69 countries have been nominated. The winners are:[58]