The Canadian government announced in January 2009 that it was adding Afghanistan to its list of preferred countries to receive foreign aid. This list includes 18 countries and the West Bank and Caribbean region.[1]

Official relations between Afghanistan and Canada did not occur immediately, but developed over time. Canadians involvement in Afghanistan dates back to the 1960s, with the creation of the first Canadian development assistance program to Afghanistan. As the need for greater coordination of efforts by development agencies working there grew, the Government of Canada decided to establish full diplomatic relations with Afghanistan in 1968.[2]

In 1971, Canadian aid to Afghanistan included 257,000 bushels of wheat, where drought had reduced production of cereal crops.[3]

The Soviet–Afghan War in 1979 and the installation of an undemocratic regime in Afghanistan led Canada to sever diplomatic ties. Even after the Soviet withdrawal from Afghanistan in 1989, the two countries did not re-establish full diplomatic relations, and contact was minimal despite humanitarian aid efforts by Canada in the 1990s.

The Taliban took control of Afghanistan in 1996. Canada became an outspoken critic of the Taliban's human rights abuses against the citizens of Afghanistan. Canada continued to provide humanitarian aid to the country despite Taliban restrictions on aid agencies. 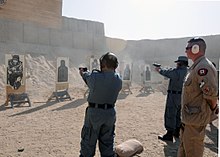 Constable Lorant Haged, Royal Canadian Mounted Police and instructor at the leadership and management course, observes ANP as they shot at targets on a 9mm familiarization range Dec. 3. The ANP are attending a six-month Leadership and Management course that will focus on teaching them to run more efficient police sub-stations.

The September 11, 2001 terrorist attacks prompted Canada to re-evaluate its policies toward Afghanistan. The Minister of National Defence Art Eggleton authorized more than 100 Canadian Forces members serving on military exchange programs in the United States and other countries to participate in the War in Afghanistan. Although Canada did not participate in the opening days of the war, Prime Minister Jean Chrétien announced on October 7 that Canada would contribute forces to the international force being formed to conduct a campaign against terrorism. General Ray Henault, the Chief of the Defence Staff, issued preliminary orders to several CF units, as Operation Apollo was established. The Canadian commitment was originally planned to last to October 2003.

Former Canadian Ambassador William Crosbie makes remarks during the opening of the refurbished Turquoise Mountain Foundation in Kabul on May 9, 2011.

Canada has an embassy in Kabul. In July 2009, an agreement on handing over of eight acre land by the Afghan government to Canadian embassy was signed in Kabul by the Afghan Minister of Foreign Affairs (Rangeen Dadfar Spanta) and the Canadian ambassador (Ron Hoffmann). The Islamic Republic of Afghanistan has an embassy in Ottawa and a consulate in Toronto. One recent Canadian ambassador was Glenn V. Davidson. His successor was Deborah Lyons, a long-time federal civil servant, Deborah Lyons' successor was Kenneth Neufeld and the current ambassador is Francois Rivest. Afghan ambassador Jawed Ludin.[5] completed his assignment in Ottawa in December 2010 and the position was filled by Barna Karimi in March 2012, the current ambassador is Shinkai Karokhel, the former MP in Afghan parliament and defender of women rights.